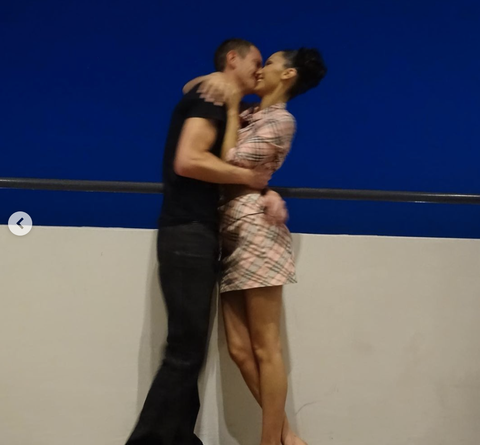 Bella Hadid seemed to subtly debut a new romance on her Instagram on July 8. The 24-year-old model shared a photo of her and art director Marc Kalman cuddled up at the end of a IG gallery, featuring shots of herself in France.

Kalman’s addition was noticed by fans and media outlets alike, who speculated she was making their private romance Instagram official. Their France outing was not the only time they sparked dating rumors, after all.

E! reported a day after the photo spread that Hadid and Kalman really are a full fledge couple. “Now that they have become more serious, she has been excited to be seen with him,” a source close to Hadid told the outlet.

So who is Kalman and what is his history with Hadid? Here, what to know about the man who has won Hadid’s heart.

Kalman is an art director who has famously worked with Travis Scott for years.

There’s a Kardashian connection between Kalman, who has worked as an art director for Kylie Jenner’s boyfriend Travis Scott and Hadid, who is close with Kylie’s sister Kendall Jenner.

Kalman is well-known for his work with Scott in the music industry and has a prolific portfolio site depicting his various projects, from doing album art for Scott to creating branding for Milk Studio’s Made Fashion Week.

Kalman and artist Corey Damon Black, who work together on Scott’s branding, did an interview with 1985 where they spoke a little about their work. The piece primarily served as a profile on the two, with writer Periel Aschenbrand describing Kalman as a good listener, a “young Fabien Baron, Charles Saatchi and Steve Jobs all rolled into one,” and “more cautious and calculating” than Black.

Black spoke about his working relationship with Kalman, saying, “Marc manages my impulses. When I’m working on something, Marc is, like, the only person I will talk to. I go into a cave. I don’t want to hear what anyone else thinks.”

When asked how Black and Kalman bring their art to the internet, Kalman and Black offered the same answer, “With value and with respect.”

Kalman is private on social media, although he and Hadid follow each other.

Don’t expect Kalman and Hadid to share much about their relationship publicly. Kalman, like Ariana Grande’s husband Dalton Gomez and Olivia Rodrigo’s new boyfriend Adam Faze, has his Instagram set to private.

Hadid does follow him though, and he follows Hadid.

On June 5, The Daily Mail ran a video of Hadid getting lunch with her “rumored beau” Kalman. It was the first time any media outlet linked the two together romantically. The video came after unverified Instagram gossip account DeuxMoi ran a post claiming Hadid had a new boyfriend earlier in the year.

After Hadid posted her Instagram with Kalman, DeuxMoi ran an update on their relationship, where DeuxMoi claimed that Hadid has quietly been involved with Kalman for some time. Of course, Hadid hasn’t verified this, so make what you will of the gossip.

DeuxMoi wrote, “She has been with him for a while. He is the same guy I was referring to when I told you guys she had a BF months ago.”

E! was told by a source a day after their debut that Hadid is “completely smitten” with Kalman—and their relationship is serious.

Hadid posting Kalman to her Instagram was a deliberate next step in their relationship. A source close to Hadid spoke to E! about their bond on July 9, describing Hadid as “completely smitten” with Kalman.

“[They] have been trying to keep it super low-key and private,” the source started. But things are changing now that they’re IG official: “Now that they have become more serious, she has been excited to be seen with him. She is truly so happy right now.”

Hadid and Kalman met in New York City through work.

Hadid and Kalman didn’t meet at any Kardashian party; their work in the fashion industry connected them. E!’s source explained that Kalman and Hadid “had met before in New York City while working. He has been the creative behind many fashion projects and they have crossed paths several times.”

Hadid’s family and friends all approve of her and Kalman.

Hadid took her time after her August 2019 breakup with The Weeknd to be single for a bit, E!’s source said, but eventually, she “felt she was finally ready for a new relationship.”

The source didn’t specify when exactly she and Kalman started dating, but the insider revealed that he has met Hadid’s family and friends.

Hadid’s mom Yolanda, sister Gigi, and Gigi’s boyfriend Zayn are among those who have met Kalman and were charmed by him, the source said: “She’s introduced him to her family and they all think he’s a great guy. He’s hung out with Gigi, Zayn and Yolanda on several occasions and they all approve and love him.”

Getting ready to buy a house

Veterans group rises up in defense of USPS, hits Trump in a blistering new ad

Why Retinal, Retinol’s Cooler Cousin, Should Be Your New Skincare Go-To