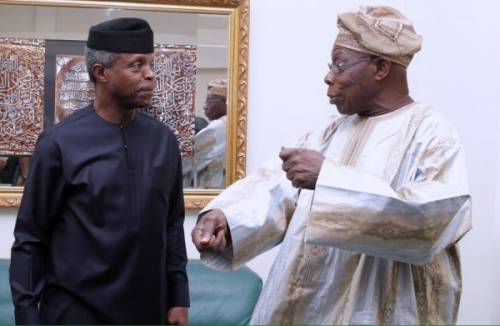 As humans, we have and feel fear. Courage with which we respond to fears separates us from the proverbial men from the boys, and women from the girls. Courageous leaders face what needs to be faced and what needs to be done. Cowardly leaders make excuses, hide their heads in the sand. They generally take the easy way out. All actions have consequences. So does lack of action.

Former President Olusegun Obasanjo and Pastor RUGA Osinbajo were missing in action when Fulani herdsmen terrorists killed and still killing Yorubas in their own state and on their own land. Any time the two men open their mouths, they ooze out bagful of lies. The recent statements by former Obasanjo and Pastor RUGA Osinbajo on the agitators for Oduduwa Nation and Biafra Republic portray them as cowards and liars. Obasanjo declares that “Citizens of Oduduwa Republic or any other republic from Nigeria will be diminished compared to citizens of Nigeria.” Nigerians are seen as 419s all over the world and they are avoided as dissident streams.

Pastor RUGA said: “For the purveyors of breaking up into small components, into small countries, perhaps they should be reminded that we would not have been able to accept Governor Ganduje’s offer to come to Kano at short notice since we would have needed visas to come to Kano.” What’s wrong in obtaining visa to travel to Kano? Don’t we get visas to visit Ghana, Benin and other neighboring countries? The two reasons by the two men why Yorubas should remain in the slaughtering field call Nigeria, are not only foolish, idiotic, senseless, and untrue, but self-serving, myopic, selfish, and wicked.

Obasanjo and Pastor RUGA frequently take the easy way out. In 1979 when Chief Obafemi Awolowo and Alhaji Shehu Shagari contested for president, Obasanjo was the military head of state. His statement about the two candidates proved that he, Obasanjo, had already declared the winner of the 1979 election before elections took place. He told Nigerians that “The best candidate may not necessarily win the election.” All Nigerians at that time knew Awolowo was the best candidate. But, Obasanjo had to rig the election in favor of his Fulani slave masters. When Fulanis were looking for gazing fields for their cows, Pastor RUGA was ready to give away his ancestral land to Fulanis through RUGA and Cow Colonies programs of Buhari’s regime.

This time around, both men will fail woefully concerning the break up of Nigeria and the eventual creation of Oduduwa Nation and Biafra Republic. Reason is they refused to look reality in the face and accept it so that they can make the tough decisions that need to be made. Because they are cowards and liars, they wave aside decisions that have a direct impact on the lives of Yorubas. Leadership is leading with both head and gut. Sadly, Obasanjo and Pastor RUGA Osinbajo have neither.

President Akufo-Addo has expressed government’s commitment to ensuring national peace and harmony before, during and after the December 7 polls.

Aside fighting officials fighting corruption, tell me what Akufo-Addo has done better than Mahama? — A Plus