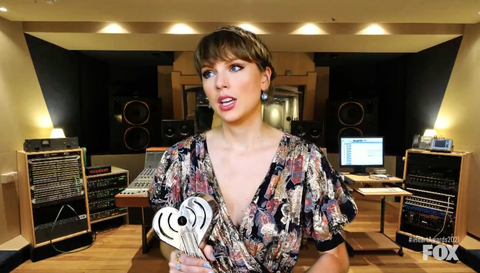 Taylor Swift continued her May red carpet circuit with a virtual appearance at tonight’s iHeartRadio Music Awards. The singer accepted the award for Pop Album Of The Year in a pre-recorded speech where she wore a metallic floral dress with a braid crown in her hair.

Swift is also up for Female Artist of the Year, Best Lyrics (for “cardigan”), and Best Fan Army. Tonight’s honors come after Swift won the Billboard Music Awards’ Top Female Artist and Top Billboard 200 Artist awards on Sunday. She was also given the BRIT Awards’ Global Icon Award on May 11.

Her BRIT Awards honor was a history-making distinction, with Swift becoming the first woman, first non-Brit, and youngest person ever to win the award. In her speech, Swift marveled over the feat and offered advice to other young artists. She said:

This is a really cool one [trophy], I love this. I am so indebted to and grateful to my British fans. I love you so much for everything you’ve done for me. We’ve had so many amazing memories in the last 15 years, from playing Shepherd’s Bush Empire to playing the O2 Arena to playing Wembley Stadium. And hey, because of you, last year I almost played Glastonbury, so. But we all know what happened next. The world changed and I ended up putting out three albums instead so making folklore and evermore was one of the most unique, cathartic, extraordinary experiences I’ve ever had. I would love the opportunity to thank the amazing creative people that I made those albums with. Thank you, Aaron Dessner, thank you Jack Antonoff, Joe [Alwyn, Swift’s boyfriend], Justin Vernon, the National, Marcus Mumford, Jon Low, Serban Ghenea, Laura Sisk, and HAIM. I want to thank my friends and family who know exactly who they are: Whose opinion of me never changed whether my stock was up or down. If there’s one thing that I’ve learned, it’s that you have to look around every day and take note of the people who have always believed in you and never stop appreciating them for it. Never take them for granted.

There are so many incredible new artists in this room tonight, and a lot of people watching who have goals and ambitions and dreams for themselves. I need you to hear me when I say that there is no career path that comes free of negativity. If you’re being met with resistance, that probably means that you’re doing something new. If you’re experiencing turbulence or pressure, that probably means you’re rising. And there might be times when you put your whole heart and soul into something, and it is met with cynicism or skepticism. You cannot let that crush you. You have to let it fuel you because we live in a world where anyone has the right to say anything that they want about you at any time, but just please remember that you have the right to prove them wrong. I love you all. Thank you so much for this beautiful honor. Thank you to the BRITs. This is amazing! 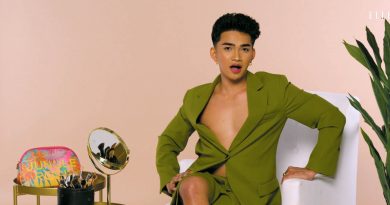 In defense of persimmons, winter’s misunderstood and underappreciated fruit