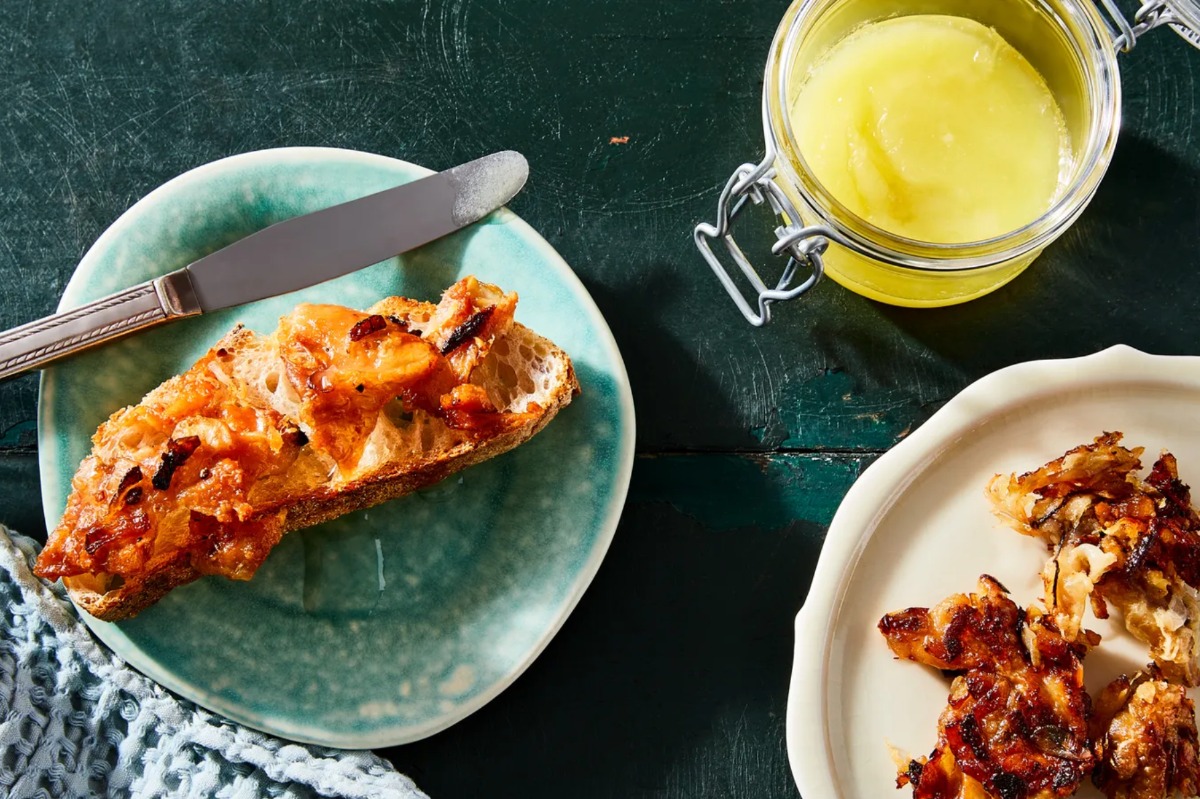 Jake Cohen’s debut cookbook, Jew-ish, has the challah and latkes and matzo ball soup. But it also has biscuits with pastrami and milk gravy, kugel-ified mac and cheese, and pumpkin-spice babka. Which is to say, it’s Jewish but it’s also, well, Jew-ish — a refreshingly personal take on how traditional recipes fit into messy modern life.

“I get very heated about steering away from my family’s tradition when it comes to many Jewish foods (just wait until you read my thoughts on brisket!),” Jake writes in the introduction. “But at the end of the day, we must celebrate any form of Jewish culture, old or new.”

Below, I emailed Jake 12 questions about schmaltz, leading to the schmaltziest conversation in my inbox to date. And honestly? My inbox has never felt better.

Jake Cohen: Simply put, it’s rendered chicken fat. But really, it’s so much more. Back in the shtetl (old country) it was often goose fat, but the key thing to remember is that it’s flavored with fried onions, making it one of the most flavorful fats to use.

EL: If you had to describe schmaltz in one word, what would it be?

EL: Do you have a strong preference between making your own schmaltz and buying it?

JC: Nah. If you can get it at the store or butcher, great. If you roast a lot of chicken, you can make it easily from scratch, too.

EL: On that note, how do you make it?

JC: Basically, you start by saving in the freezer all the fat you typically trim when you roast a whole chicken. When you have a substantial amount (with lil’ bits of skin attached, too), you throw it in a pot with water to render out completely. Once all the water has evaporated, you have rendered chicken fat. From there you throw in a sliced onion to fry, then strain. The strained onion and crispy chicken bits is called gribenes and is heaven.

EL: And where should readers go to buy it?

JC: Any kosher butcher or even many butcher counters at grocery stores.

EL: If someone can’t find schmaltz and doesn’t want to make it, would butter or oil or something else work instead?

JC: Duck fat! So easy to find these days, and it’s the closest thing.

EL: You have a recipe for “vegan schmaltz” in Jew-ish. How is this even possible?

JC: It’s mainly a play on the importance of fried onions in the flavor of schmaltz. I confit onions in olive oil, then strain out the fat, which is as close to schmaltz as you’ll get without any poultry.

EL: What are a few ways not-vegan schmaltz comes up in classic Jewish cooking?

JC: Matzo balls! The best balls have schmaltz. Period. But also it’s the base fat for so many recipes that need richness. Because of kosher law, butter wouldn’t be used for savory meat dishes, so schmaltz is a staple.

EL: And how about your own kitchen — what are some of your favorite no-recipe ways to use this ingredient?

JC: I use it as a compound fat, like butter. Stir in a bunch of herbs or spices and toss with potatoes, or rub on chicken before roasting, or even on bread for toast with extraaaaa oomph.

EL: We’re sharing your Schmaltzy Chex Mix with our readers. How the heck did you come up with this?

JC: I love Chex mix. I think it’s the best snack hands down. It’s so intensely savory, and typically just packed with oil. I wanted to add that chickeny richness for a punch of flavor.

EL: If you were stranded on a desert island with schmaltz and four other ingredients, what would they be?

JC: Mayonnaise, onions, challah, and cheddar cheese. Everything I need for a next-level grilled cheese.

EL: Is there anything schmaltz can’t do?

JC: Lol. It’s not the best in baking because of the onions. But in savory baking, let’s go! Schmaltzy focaccia sounds dank.

EL: Schmaltzy focaccia! I need it.

This post contains products independently chosen (and loved) by Food52 editors and writers. As an Amazon Associate, Food52 earns an affiliate commission on qualifying purchases of the products we link to.

Our July 4th menu freshens up classics like cheeseburgers, pasta salad and the classic “flag cake”