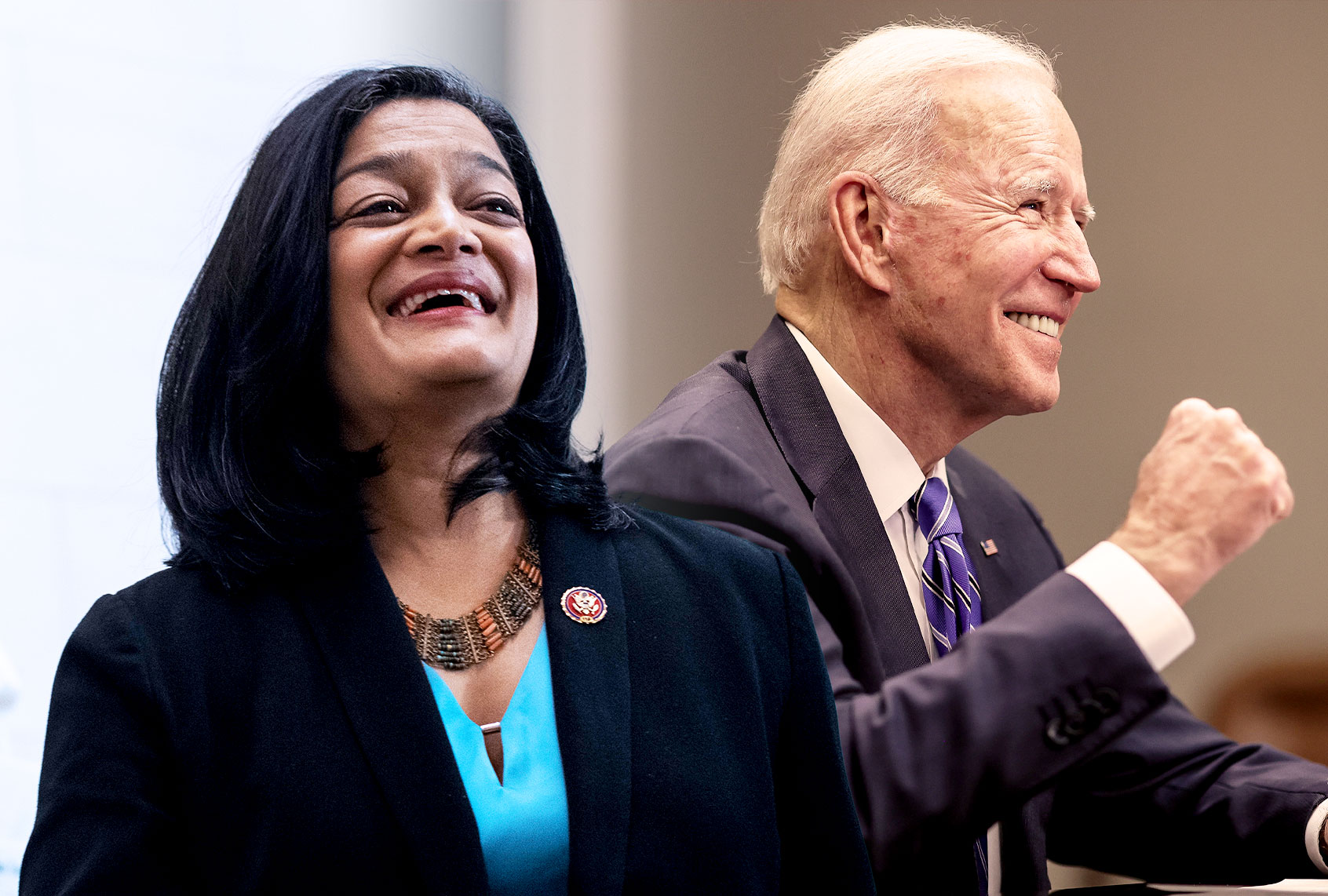 It’s the job of progressive advocates and activists to tell inconvenient truths, without sugarcoating or cheerleading. To effectively confront the enormous problems facing our country and world, progressives need to soberly assess everything — good, bad and mixed.

Yet last week, the chair of the Congressional Progressive Caucus, Rep. Pramila Jayapal of Washington, made headlines when she graded President Biden’s job performance. “I give him an ‘A’ so far,” Jayapal said in an otherwise well-grounded interview with the Washington Post. She conferred the top grade on Biden even though, as she noted, “that doesn’t mean that I agree with him on every single thing.”

Overall, the policies of the Biden administration have not come close to being consistently outstanding. Awarding an “A” to Biden is flatly unwarranted.

In school, an “A” grade commonly means “excellent performance” or “outstanding achievement.” Rendering such a verdict on Biden’s presidency so far promotes a huge misconception and lowers the progressive bar.

Biden does deserve credit for some strong high-level appointments (Deb Haaland as Interior secretary jumps to mind), a number of important executive orders (many simply undoing four years of horrific Trumpism), and one crucial legislative achievement — the American Rescue Act. The proposed American Jobs Act (a small step toward a Green New Deal) and American Families Act (which includes education and anti-poverty funding) are also quite progressive.

But Biden has made several major appointments that overtly kowtowed to corporate America — for example, “Mr. Monsanto” Tom Vilsack as secretary of agriculture and former venture capitalist Gina Raimondo as commerce secretary. To mark Biden’s first 100 days, the Revolving Door Project issued an overall grade of B-minus in its report card on how Biden had done in preventing “corporate capture” of the executive branch by industries such as fossil fuels, Big Pharma and Big Tech.

In an improvement over the Obama era, the Biden administration earned a B/B-plus in keeping Wall Streeters from dominating its economic and financial teams. On the other hand, as graded by the Revolving Door Project, Biden got a D-minus on limiting the power of the military-industrial complex over U.S. foreign policy: “We are particularly alarmed by Biden’s hiring of several alumni of the Center for a New American Security, a hawkish think tank funded by weapons manufacturers like Lockheed Martin and Northrop Grumman.”

Much as “personnel is policy” in the executive branch, the federal budget indicates actual priorities. Biden’s budget reflects his continuing embrace of the military-industrial complex, a tight grip that squeezes many billions needed for vital social, economic and environmental programs. The administration recently disclosed its plan to increase the basic military budget to $753 billion, a $13 billion boost above the last bloated Trump budget. (All told, the annual total of U.S. military-related spending has been way above $1 trillion for years.) And Biden continues to ramp up spending for nuclear weapons, including ICBMs — which former Defense Secretary William Perry aptly says are “some of the most dangerous weapons in the world.”

Meanwhile, Biden is heightening the dangers of an unimaginably catastrophic war with Russia or China. In sharp contrast to his assertion on Feb. 4 that “diplomacy is back at the center of our foreign policy,” Biden has proceeded to undermine diplomacy with reckless rhetoric toward Russia and a confrontational approach to China. The effects have included blocking diplomatic channels and signaling military brinkmanship.

Biden won praise when he announced plans for a not-quite-total U.S. troop withdrawal from Afghanistan, but he has not committed to ending the U.S. air war there — and some forms of on-the-ground military involvement are open-ended.

Unfortunately, little attention has gone to the alarming realities of Biden’s foreign policy and inflated budget for militarism. Domestic matters are in the spotlight, where — contrary to overblown praise — the overall picture is very mixed.

While Biden has issued some executive orders improving social and regulatory policies, he has refused to issue many much-needed executive orders. Give him an “I” for incomplete, including on the issue of $1.7 trillion in student loan debt that undermines the economy and burdens 45 million debtors, especially people of color. Biden has not budged, even after non-progressive Democrats like Senate Majority Leader Chuck Schumer have pressed him to use his executive authority under existing legislation to excuse up to $50,000 in college debt per person.

On the subject of health care reform, Biden has long been held back by his allegiance to corporate power — as Rep. Jayapal knows well, since she has tenaciously led the Medicare for All battle in the House. Biden has never disavowed his appalling comment in March 2020 that he might veto Medicare for All if it somehow passed both houses of Congress. During the traumatic 14 months of the pandemic since then, while millions have lost coverage because insurance is tied to employment, Biden’s stance hardly improved. Candidate Biden had promised to lower the age of Medicare eligibility from 65 to 60, but even that meager promise has disappeared.

With wealth and income having gushed to the top in recent decades, especially during COVID, Biden is proposing some tax increases on corporations and the very wealthy — measures highly popular with voters — to pay for infrastructure and social programs. For example, Biden proposes returning the top marginal tax bracket on the richest individuals from 37 percent to merely 39.6 percent, where it was in 2017 before Trump lowered it. As a presidential candidate, Sen. Bernie Sanders campaigned on raising the top tax bracket to 52 percent, while Rep. Alexandria Ocasio-Cortez has called for raising it to 70 percent, a popular approach according to polls. To put this all in perspective: When the U.S. economy and middle class boomed during the 1950s, the top tax bracket was over 90 percent under Republican President Dwight Eisenhower.

We have no quarrel with those who seek to inspire optimism among progressives by pointing out that their activism has already achieved some great things. But activism should be grounded in candor and realism about where we are now —  and how far we still need to go.

Proud Boys charged in Capitol riot may have been targeting police, filings show