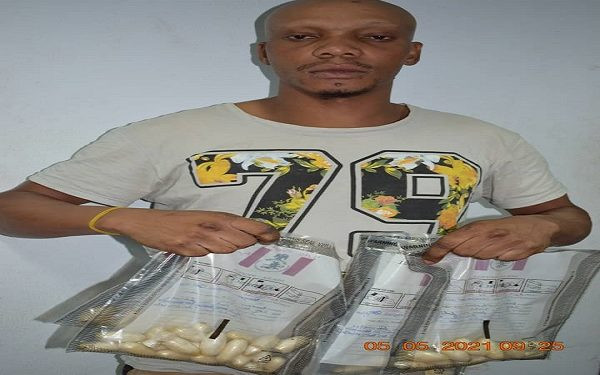 Following his arrest at the Nnamdi Azikiwe International Airport, Abuja, while trying to board a Milan, Italy bound flight by the operatives of the NDLEA, 23-year-old trafficker, Okoguale Douglas has excreted 59 wraps of heroin weighing 781.2 grammes.

Director of media and Advocacy of the Agency, Femi Babafemi in a statement issued in Abuja yesterday said, Douglas, who hails from Uromi in Esan North-East Local Government area of Edo state, was arrested at the boarding gate of the airport enroute Abuja-Addis Ababa- Milan (Italy) after being scanned. Babafemi quoted him to have also confessed that he was promised 2000 Euro if he successfully delivers the drugs to Italy.

The suspect said he came to Nigeria on April 4, 2021 for the burial of his late father and after spending so much during the burial, he ran out of money, a situation that made him to ask for financial support from one of his Nigerian friends resident in Italy. He further claimed that his friend then told him he would send him money on the ground that he will collect a consignment for him from another friend of his in Nigeria.

Commander, NAIA Command of the Agency, Kabir Sani Tsakuwa said efforts are still ongoing to unravel other suspects connected to the crime. Canker sores often go away on their own, are not contagious – TribLIVE

I was insulted today because of my good attitude.
Pls it is bad to stop a taxi just to greet the people inside?
🙈🙈🙈