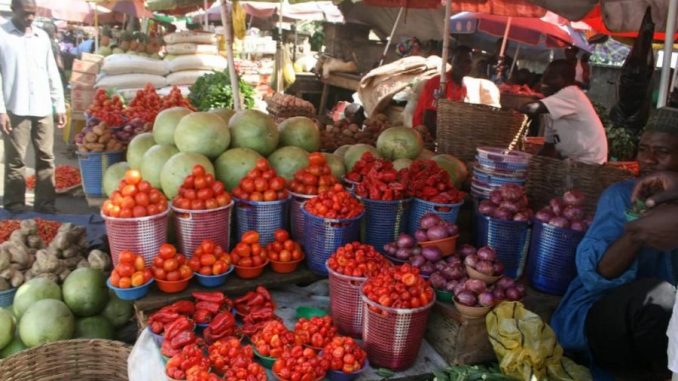 Since becoming president on May 29, 2015, Muhammad Buhari has not left anyone in doubt as to what his government will be doing in the first tenure. Consequently, he rolled out his 3-pronged agenda of revamping the economy, fighting corruption and improving the security of the country.

My main focus in this piece is to give an overview of the PMB administration’s strategies to ensure food security for the nation. As a critical sub sector in improving the fortunes of the nation’s economy, food security is the lifeline upon which all lives depend on regardless of class, region, religion or tribe.

The first move was the launching of the Anchor Borrowers Programme, ABP, of the Central Bank of Nigeria by President Buhari on November 17, 2015. N200 billion was released to fund farming of 16 staple food items by more than 1.5 million smallholder farmers across the country.

The commodities for funding under the programme are rice, wheat, maize, cotton and cassava. Others are poultry, soya beans, groundnut and fish. Over 1.4 million hectares of farmland was earmarked for cultivation. Since then, the ABP has substantially raised local production of rice as the country’s most used staple food item, thus doubling the production of paddy and milled rice between 2015 and 2019.

Between 2016 and 2019, over 10 new rice mills came on-stream in Nigeria. Many of the existing mills expanded their capacity while several new ones are under construction in all parts of the country. The private sector also seized the opportunity offered by government to promote massive production of food items at home with a view to stop their importation to also invest $1 billion in the production of rice, wheat, sugar, poultry, animal feeds and fertilizers, among others.

Government’s next strategic move was the launching of the Presidential Fertilizer Initiative, PFI, in January 2017, as a government-to-government agreement with the Kingdom of Morocco. The PFI which involves a partnership with Morocco for the supply of phosphate as well as technical assistance has resulted in the revitalization of 14 fertiliser blending plants across Nigeria.

As part of the PFI, in 2018 Nigeria and Morocco signed a Memorandum of Understanding between OCP of Morocco and the Nigeria Sovereign Investment Authority, NSIA, on the establishment of a Basic Chemicals Platform specifically to develop a significant Ammonia Production Plant in the Niger Delta.

So far more than a million metric tonnes of fertilizer had been produced locally since 2017. This translated to the distribution of 18 million 50kg bags of NPK fertilizer in the first three years of the PFI. All the blending plants resuscitated so far have a combined installed capacity of 2.5m metrics tones yearly thereby resulting in price reduction from N9,000-N11,000 per bag to N5,500 now officially.

Interestingly, this measure has also led to foreign exchange savings of $150m annually through the substitution of imported components with locally manufactured ones while also saving N50 billion that would have gone into subsidy if such needs were imported annually

Also worthy of mention is the Home Grown School Feeding Programme, HGSFP, of the Special Intervention Programme, SIP, as another approach towards ensuring food security in the country. So far, 9.9 million primary 1-3 pupils in 54,952 public primary schools in 35 states are offered one meal every school day. More than 107,000 cooks are engaged to deliver these meals.

The Minister of Agriculture and Rural Development, Alhaji Muhammad Sabo Nanono, had recently while receiving participants of Senior Executive Course NO. 43 of the National Institute for Policy and Strategic Studies, NIPSS, Kuru, said the federal government is targeting to train 75, 000 extension workers for the country over a period of 3 years. Also, the ministry is targeting 60,000 tractors to drive its Agriculture Mechanisation Programme.

He said that the programme would ensure food and nutrition security, create jobs and boost the economy in line with President Buhari’s policy to boost food production. Nanono noted that agricultural mechanisation now revolves around the world, saying it would address the challenge of feeding the nation’s growing population and achieve food sustainability.

Similarly, a Memorandum of Understanding between Nigeria Incentive-Based Risk Sharing System for Agricultural Lending, NIRSAL and Petkus Technologie of Germany, aimed at significantly reducing the incidence/impact of post-harvest losses in Nigeria’s Agricultural Value Chain was signed to further support Nigerian farmers achieve government’s effort for a sustainable and workable food security for the country.

Furthermore, President Buhari had also approved the release of 70,000 metric tons of grain for distribution to poor and vulnerable households across the country during the Covid-19 lockdown in 2020. This was in addition to establishing a Joint Technical Task Team to facilitate the movement of food and agricultural inputs across Nigeria. All hands must therefore be on deck to support government to ensure a hitch-free and seamless execution of its strategic agenda on food security.

The Tyler Twins Since its inception, the hair care industry in America has been rooted in the idea that Black