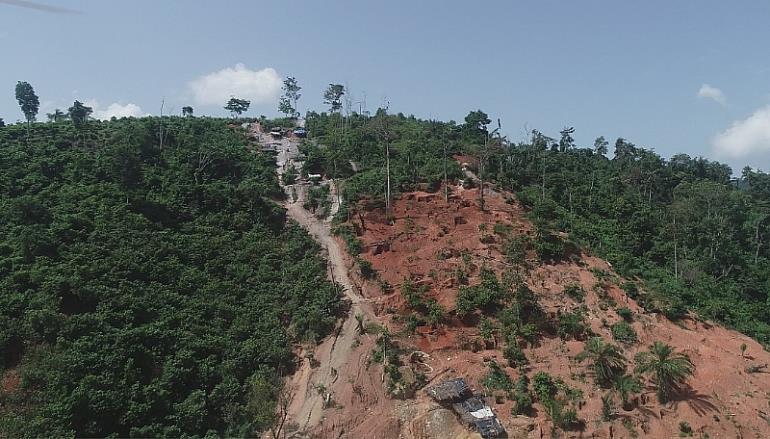 There appears to be no end in sight in the ongoing destruction of the rich natural mineral resources in the Akyem Abuakwa Traditional area, especially Kyebi and its environs.

The Kyebi area was first described as the headquarters of illegal mining popularly known as galamsey by former President John Dramani Mahama in the year 2014, after expressing shock to the destruction being caused by illegal miners.

Thus, the Kyebi township became synonymous with opened mining pits, destroyed water bodies serving as source of drinking water and deteriorated condition of farmers in the area due to destruction of their farms.

Realizing however that, the land in the area is now ‘fatigued’ and is not rich anymore as it used to be, the desperate miners have not relent in their illegal ways but have moved their activities to the hillside located in the Kyebi township where they blast the rock and mine gold.

“What is disturbing about this mining activity is the use of dynamite to blast the hills during certain time of the day to enable the miners have access to what they called the rock ore,” Kwasi Apenteng, resident of Kyebi told ghenvironment.org.

According to the aggrieved resident, apart from the heavy sound that always accompanies the blast, there is also the issue of pollution which is affecting those staying along the foot of the hillside.

‘And our major fear now is erosion along the hills which we risk facing when the raining season start, especially we those living directly under the hills but it seems no one cares and these miners are carrying out their activities with impunity”, he said.

Madam Faustina Appiah, another aggrieved resident however has questions for the illegal miners, state institutions and Traditional Authorities tasked to protect the environment.

She asked “Who sanctioned these rock mining activities on the hillside surrounding Kyebi, did the Minerals Commission issue mining permits for these activities to happen, what is the role of the EPA in ensuring that the right permits are secured for a sensitive area as the hillside of Kyebi, which company is involved in this activity and is the Okyeman Mining Protection Unit aware of this development”?

“This is the hometown of the President of Ghana and there is an urgent need to stop the wanton destruction of our environment. This is because, the illegal miners are not only destroying the Kyebi hillside but also places like Odumase and Potroase which fall under the East Akyem Municipality, destroying waterbodies such as river Densu and Birim”, she added

Checks by ghenvironment.org have revealed that, the miners are operating illegally as both the Minerals Commission and the Environmental Protection Agency (EPA) have not sanction their mining activities.

A source at the mining site also confirmed to ghennvironment.org that, a miner recently died, after one of the dynamites failed to detonate when it should and he found himself in the area when the dynamite eventually went off. 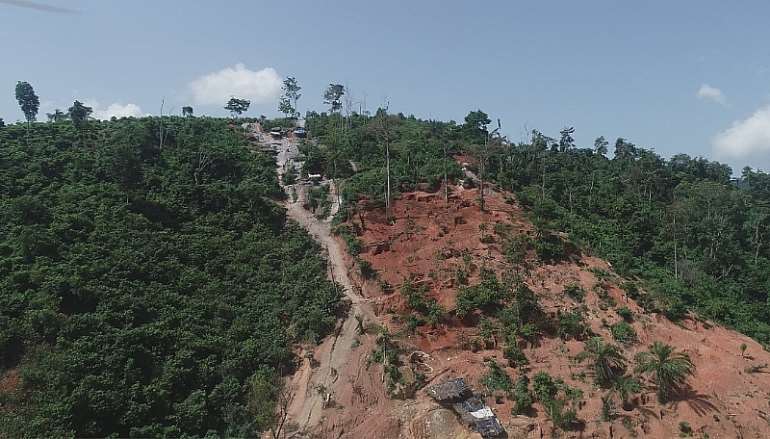 Mining ongoing at the Kyebi hillside

We are doing our best
When contacted, a representative of the Okyeman Mining Protection Unit, a taskforce under the Traditional Authority to protect the environment in the Okyeman area said, the Unit is trying its best to fight those destroying the environment.

He said “If you have recently visited the hillside, you will see that, we have begun covering some of the pits being created by the illegal miners, but our main problem is that, these miners will come back in the night when everybody is asleep to carry out their activity”.

According to the representative of the Unit, the Traditional Authority under the guidance of the Okyenhene, Osagyefuo Nana Amoatia Ofori Panin is determined to clamp down on the activities of the illegal miners and must be supported by all to achieve it. 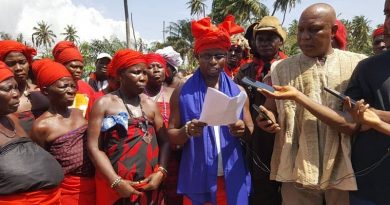