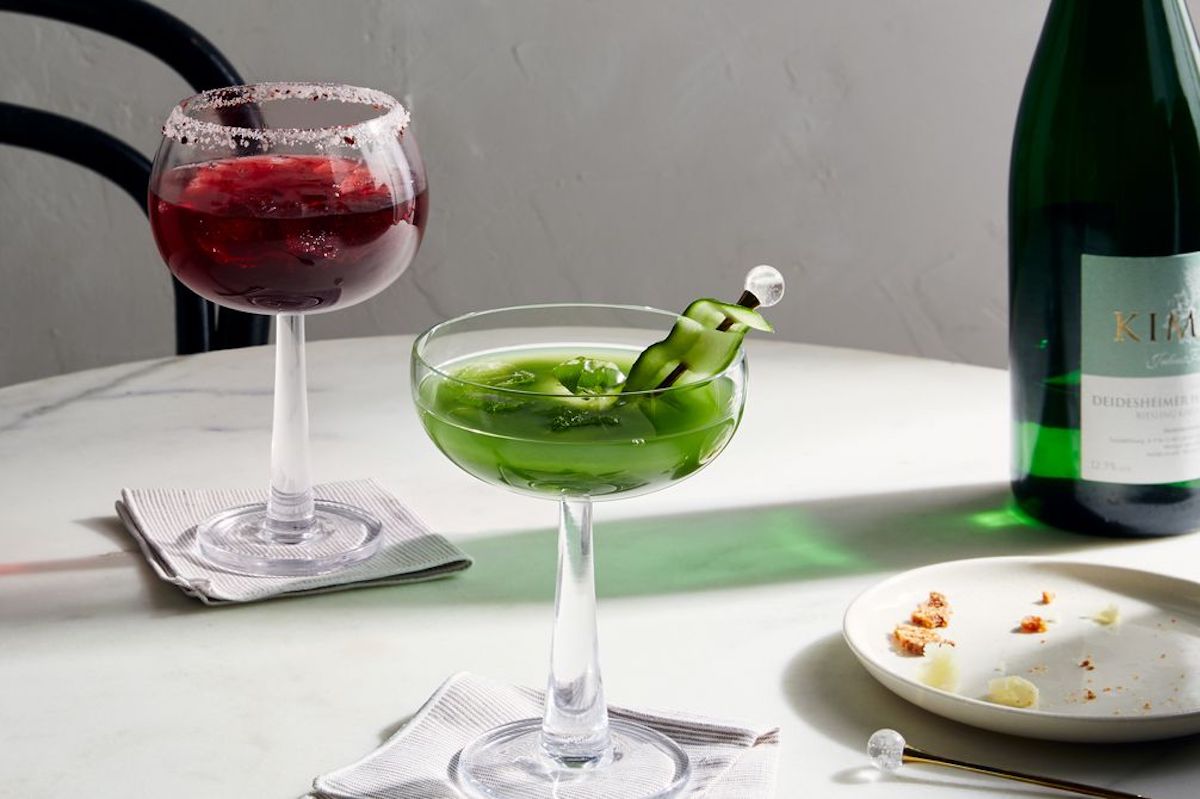 “Alcohol” and “healthy” aren’t two words we typically put together, but many companies have been making an effort to present products in a more wellness-forward light. From “clean wine” to hard kombucha and low-ABV cocktails, “better-for-you alcohol” has been trending over the past few years. Let’s get real though: Is there really any such thing as healthy alcohol?

A number of studies show there may be health benefits for those imbibing in moderation.

For instance, according to Kelsey Lorencz, a registered dietician, the polyphenols found in wine have been found to inhibit cancer cell growth, improve cardiovascular health, and decrease inflammation in the body. In addition, registered dietician nutritionist Toby Amidor says research shows that procyanidins in red wine can help reduce the risk of type 2 diabetes, cataracts, and colon cancer, and the flavonoids in red wine have been found to stop the skin’s chemical reaction to excessive sun exposure.

And it’s not just wine: Beer has a unique antioxidant profile, and hard kombucha contains antioxidants, polyphenols, vitamins, minerals, and probiotics (good for your microbiome, among other things).

“According to an observational study in the “British Medical Journal,” drinking any type of alcohol in moderation is linked to a lower risk of heart disease,” Amidor says. “The reason for this could be that it is not just the components in specific types of alcohol (like red wine) but rather that alcohol itself may have some heart-protecting benefits.”

Are some alcohols healthier than others?

This answer is a little more complicated. For instance, while the makeup of hard kombucha means it’s a healthier option than other alcoholic beverages, especially ones high in sugar, it still contains alcohol and should be consumed in moderation. Certified health and wellness coach Megan Swan says that hard kombucha or any kombucha that is mass-produced is likely to have lower gut health benefits than you may be imagining, as it’s unlikely to have the same level of live bacteria as homemade kombucha.

What Is “Clean Wine?”

What about so-called “clean wines,” which promise everything from no added sugar to hangover-free drinking? Are they better than other types of wine? The first thing to know is that there’s really no such thing as “clean wine.” The phrase is an unregulated marketing term.

“As a natural-wine eCommerce owner, the ‘clean wine’ movement bugs me for a few reasons,” says Holly Berrigan of MYSA Natural Wine. “It promotes wine as a health product, when anything that has alcohol should never be promoted as such. It can be argued that natural wine is better for you, of course, because logically putting alcohol with chemicals and pesticides in your body is not as good as putting in alcohol made without additives. But it’s still alcohol.”

Organic wine is also thought to preserve natural nutrients and antioxidants, but so far, studies around those claims have proved inconclusive. And, as Berrigan points out, natural wines are about more than health; the larger goals are about environmentalism and sustainability.

“Most of the new ‘clean wine’ brands don’t tell where they came from or who made it, and that, to me, is just a marketing tactic, not actually caring about the wine and process,” Berrigan says.

Low-ABV and nonalcoholic beverages have also become popular, and ABV certainly matters. According to the 2020–2025 dietary guidelines for Americans who drink alcohol, the recommendation is a maximum of one drink per day for women and two drinks per day for men.

“One drink is defined as 12 ounces of regular beer (5% alcohol), 5 ounces of wine (12% alcohol), or 1 1/2 ounces of 80-proof distilled spirits (40% alcohol). If you choose to drink a higher percent of alcohol, you will be taking in a bigger portion, which counts as more than one drink,” says Amidor.

Whether you prefer cocktails, wine, beer, cider, or kombucha, you can still imbibe while being mindful of your overall well being. Swan says to choose quality over quantity, and ask questions about how the beverage was made. Look at the list of ingredients when available, as well as the sugar and alcohol percentages.

“When it comes to alcohol itself, it’s important to remember that too much, even if it has some health benefits, is going to be detrimental to your health,” says Lorencz.

Remember that whether it’s organic, natural, or “clean,” alcohol is still alcohol.

Listen to article Ghana will open its borders to international travelers on September 1 after consultations with stakeholders are concluded.