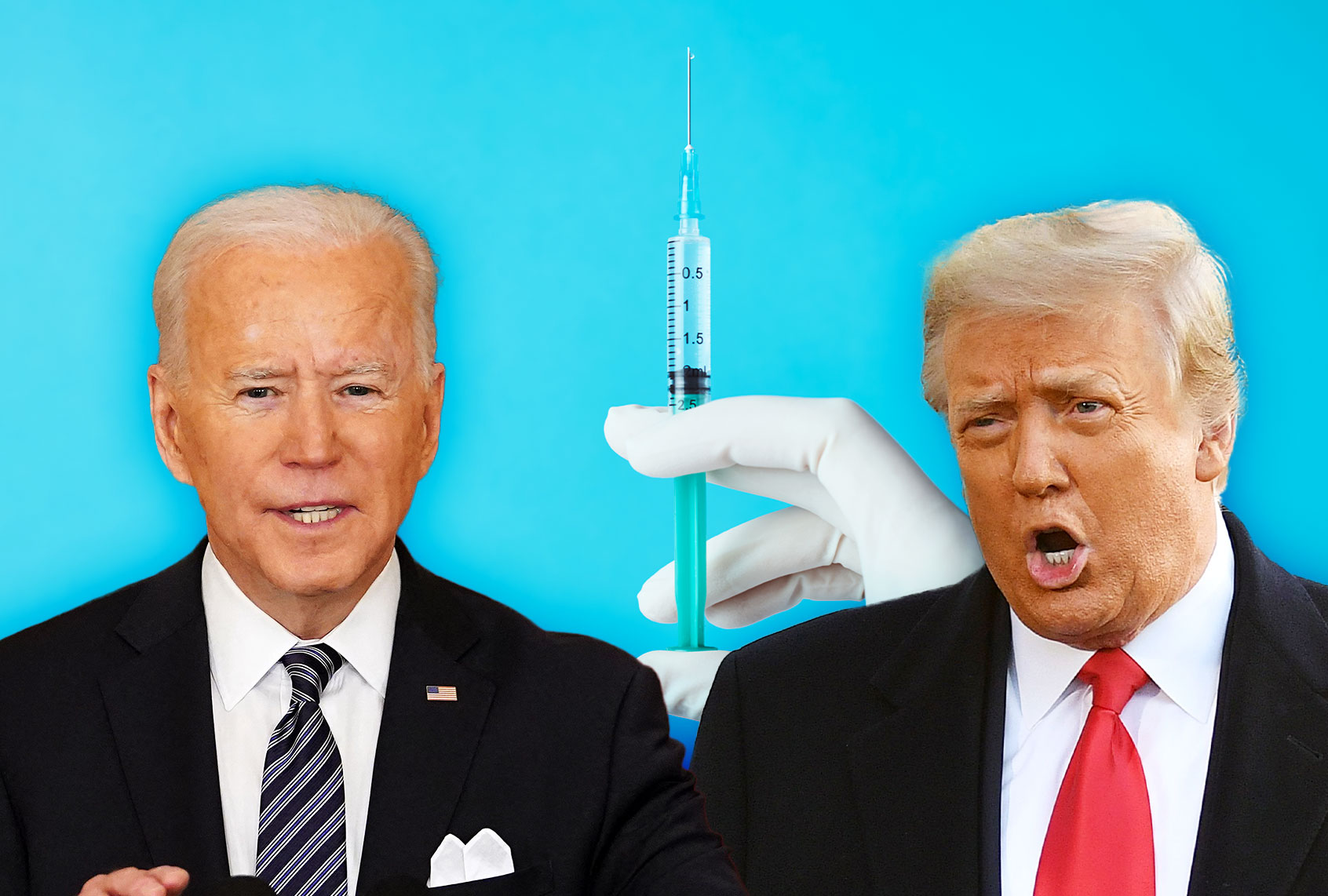 Good news has been so rare for so long that it hardly seemed real to hear him say it, but sure enough, during his national presidential address Thursday night, President Joe Biden said that COVID-19 vaccination rates are speeding up so much that by May 1 states should be able to make every adult eligible for the shot.

“If we do our part, if we do this together, by July Fourth, there’s a good chance you, your family and friends can gather in your backyard and have a barbecue and celebrate Independence Day,” Biden said from the East Room of White House.

Unfortunately, there’s a lot of Americans who refuse to do their part — and it’s the Donald Trump fandom that is the problem.

New polling shows that all that anti-vaccination propaganda on Fox News is working and Republican voters, especially men, are hardening their personal opposition to getting vaccinated.

Important numbers on vaccine hesitancy we highlighted on @NewsHour.

Americans who will choose NOT to be vaccinated if one is available to them:

To be clear, the data collected by PBS Newshour/NPR/Marist shows that there is an alarming amount of vaccine hesitancy in all corners of the American population. Even 1 in 10 Democrats is vaccine-hesitant. Education rates appear to be a big factor, with 22% of college graduates saying they won’t get the shot versus 34% of noncollege educated people. Age is also a major factor, with younger people being more opposed to the vaccine than older people, which is unsurprising considering who is most likely to die from COVID-19.

But a lot of that vaccine hesitancy can be addressed through education efforts. Formal efforts like the Ad Council spot showing all former living presidents (except Donald Trump) getting the shot will help, as will informal efforts, such as ordinary people sharing their vaccine selfies on social media. A lot of the fear is being driven by ignorance, and as most people learn more and see that the shots are safe, they will be more willing to get them.

The exception to this rule is the Republicans.

They aren’t being driven by ignorance but out of what has turned into a chronic, now deadly willingness to put “owning the liberals” before every other goal — including apparently surviving. That was evident in the way so many conservatives refused to wear masks and now is evident in the hardening opposition to getting vaccinated. Being willing to die for one’s values is often an admirable thing, but in this case, it’s just a recklessly dangerous unwillingness to admit that liberals might be right about something.

Fox News shares a huge part of the blame, of course. The network has been pumping out a steady stream of anti-vaccination messages, which are now spreading across all right-wing media like wildfire. The reasons aren’t hard to guess. Much of it is not wanting Biden’s presidency to be a success, even if that means letting their own audiences die to get there. And a lot of it is plain old unwillingness to admit liberals were right all along about the coronavirus being dangerous. Trump’s refusal to get his vaccine on-camera no doubt is contributing, as well.

This is a large group of Americans — large enough that it might keep the country from achieving the desired levels of herd immunity. Add to it that there will be a number of Americans who won’t get vaccinated not because of political identity, but out of laziness or because they believe the conspiracy theories being pumped out by right-wing media. There’s a very real chance, then, that the July 4 date isn’t met not because of a lack of resources, but because of the toxic political situation bred by decades of right-wing propaganda.

It’s time, then, to start thinking of a Plan B: re-opening the country without herd immunity.

Unfourtanetly, we are going to have to let the vaccine refusers take their chances. This might sound callous, but it’s already how we handle vaccine refusal with diseases like the flu, where thousands of adults who didn’t get their free shot end up getting sick or even dying every year because of it. It’s worth remembering that the main problem with COVID-19 has been the way it overwhelmed our health care services and led to mass illness and death. But if we can get those numbers under control, the situation really can be something more like the flu or other communicable diseases that haven’t disappeared but also aren’t wreaking havoc on our health care systems.

Dr. Ashish K. Jha, the dean of the School of Public Health at Brown University, spoke with Isaac Chotiner of the New Yorker about this. He noted that once “there are plenty of vaccines available and they are cheap and easy to get,” then restrictions become “about protecting people who have chosen not to be vaccinated.” Jha questioned whether the rest of us should sacrifice normalcy to protect people who refuse to protect the rest of us.

“If you choose not to get vaccinated for measles or polio, we tend to not make a whole lot of policy changes to try to protect you in those contexts,” he added.

With the full caveat that this is a new disease and there might be developments that change this equation, right now, Dr. Jha’s calculus is the smart one. We simply cannot remake our entire society around people who refuse to play nice with others. Ideally, we would simply force the vaccine-reluctant to get the shot, by withholding privileges like travel or the right to eat in restaurants from them. But it’s already probably too late for that, as there’s not a good tracking system in place to prove who has and hasn’t gotten vaccinated.

It is important to realize that there is one silver lining here: Vaccine refusal among right-wing Americans has meant that the vaccines are becoming more widely available to everyone else a lot sooner than expected in many parts of the country. Fox News has caused so much grief and misery for the majority of Americans who reject their message of hate and bitterness. So it’s really the least they can do for the non-hateful majority to help us get our vaccines just a little bit faster.

Biden’s goal of July 4 is a good one. But instead of setting the baseline for returning to normal at “herd immunity,” it might be wiser to set it at “more shots than people willing to get them.” Otherwise, we might be waiting forever.

Problem Solution: Hydrating Regimen Best of Dermstore dermstore.com $75.00 Dry winter skin is no match for this hydrating regimen. These