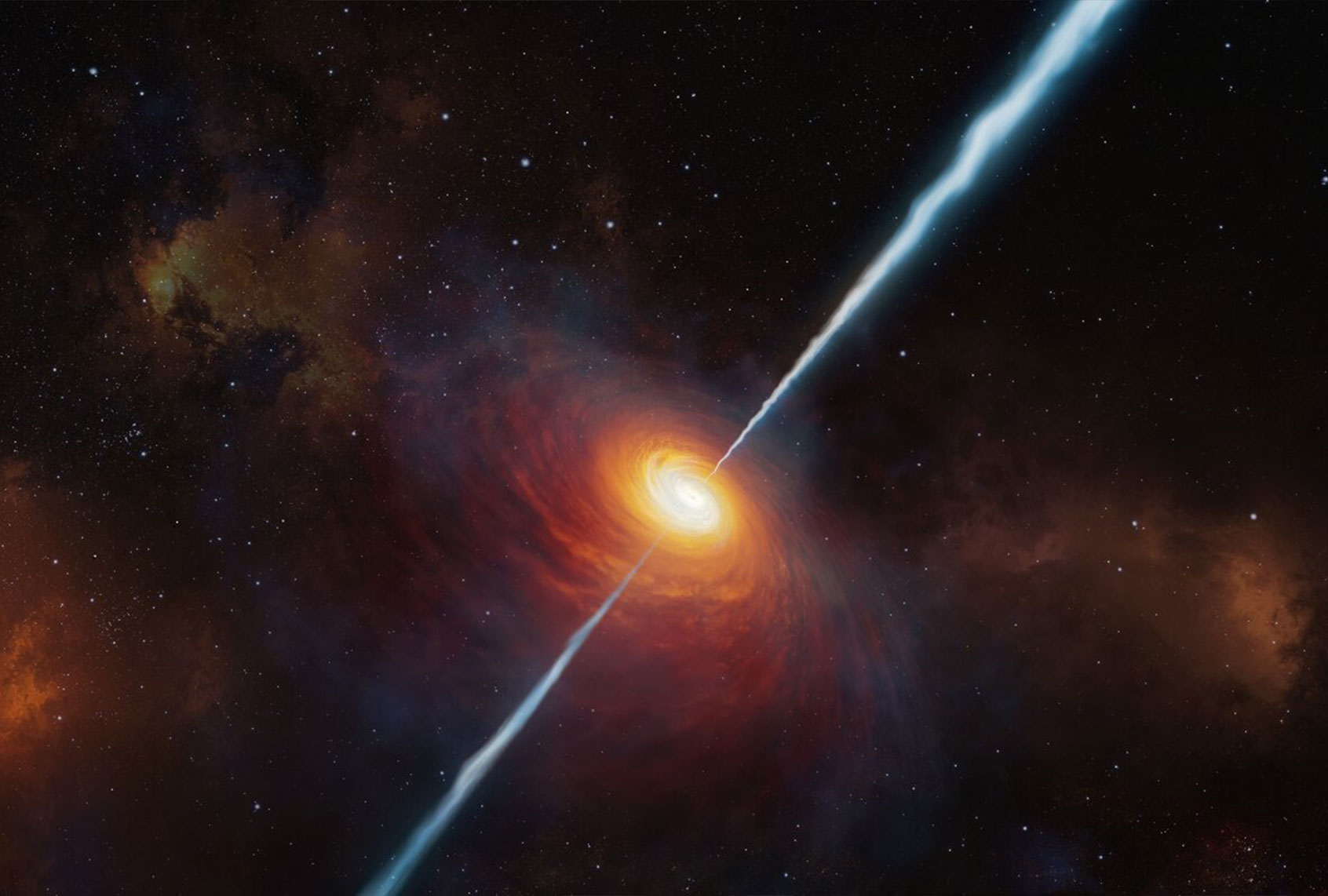 At the center of the most distant galaxies in our universe sits a very bright object powered by a supermassive black hole a billion times as massive as our sun. These objects are called quasars — short for quasi-stellar object — and sometimes they shine so bright that they can obscure nearby galaxies. From a telescope, quasars appear as stars, and thus astronomers can readily observe these celestial objects despite their vast distances. But sometimes, they shine bright not in visible light but in the invisible radio spectrum, like a great glowing cell phone in the sky.

Such is the case with a newly discovered quasar dubbed P172+18. Thanks to the European Southern Observatory’s Very Large Telescope (ESO’s VLT), astronomers spotted this, one of the most distant quasars ever, and its powerful, prominent radio jets, which only about ten percent of quasars have.

P172+18 is so distant that light from it has travelled for about 13 billion years to reach us. That means that we are able to see it as it was when the universe was just around 780 million years old. Technically, more distant quasars have been identified, but this is the first time one has been observed sporting radio jets this early on in the history of the universe. That’s throwing astronomers’ working model of the universe’s evolution for a spin.

The findings were presented in a study published in The Astrophysical Journal last week.

Chiara Mazzucchelli, who co-led the discovery, told Salon via email that the quasar is significant because it will help astronomers advance their understanding of the early universe — and particularly of the first massive galaxies and black holes that formed during that time.

“Quasars with powerful radio jets are quite rare,” Mazzucchelli said. “These radio jets are important because theories suggest that they can trigger mechanisms of very fast growth of the central black holes, and indeed the black hole at the center of P172+18 is accreting at a very high pace — it is amongst the fastest in the universe that we know so far.”

Mazzucchelli said astronomers usually expect to find quasars with radio jets in a certain kind of galactic environment — “surrounded by overdensities of galaxies that will evolve in the clusters of galaxies that we see nowadays.” Our galactic neighborhood likely formed from an object that looked similar.

“We do not have the data to confirm or discard this in our case yet, but we might be observing one of the most dense regions in the early universe,” Mazzucchelli said.

Crucially, astronomers can use this quasar as a “flashlight” for “the state of the universe at that time,” Mazzucchelli explained — meaning one can observe how the light from the quasar interacts with nearby matter, and deduce what the nature of the universe was back then.

Indeed, this period — around 1 billion years after the universe formed — is still ill-understood.

“Around 1 billion years after the Big Bang we have ‘transition phase,’ in which the first stars and galaxies start to form, shine, and ionize the precedent neutral medium permeating the universe before,” Mazzucchelli said. “In practice, the first stars and galaxies turn on and the universe becomes then ‘transparent’ to light, while before it was only filled by neutral gas.”

This transition phase, as Mazzucchellii said, is called the epoch of reionization (EoR).

“In practice, we still do not precisely know how/when/how fast this transition happens,” Mazzucchelli said. “P172+18 can help us constraining how ‘transparent’ the region around the quasar was at time, and so constrain the epoch of reionization.”

In other words, the quasar can function as a so-called flashlight, one which we can use, in a sense, to observe how transparent the universe looked 13 billion years ago. In a sense, this massive quasar belching out radio waves is helping human astronomers clear the fog of the early universe.

Is it safe to use public restrooms during the pandemic?

A job for the “Squad” and progressive allies: Unite to downsize Biden’s military budget

GJA, Others must condemn attacks on journalists—Olumanba