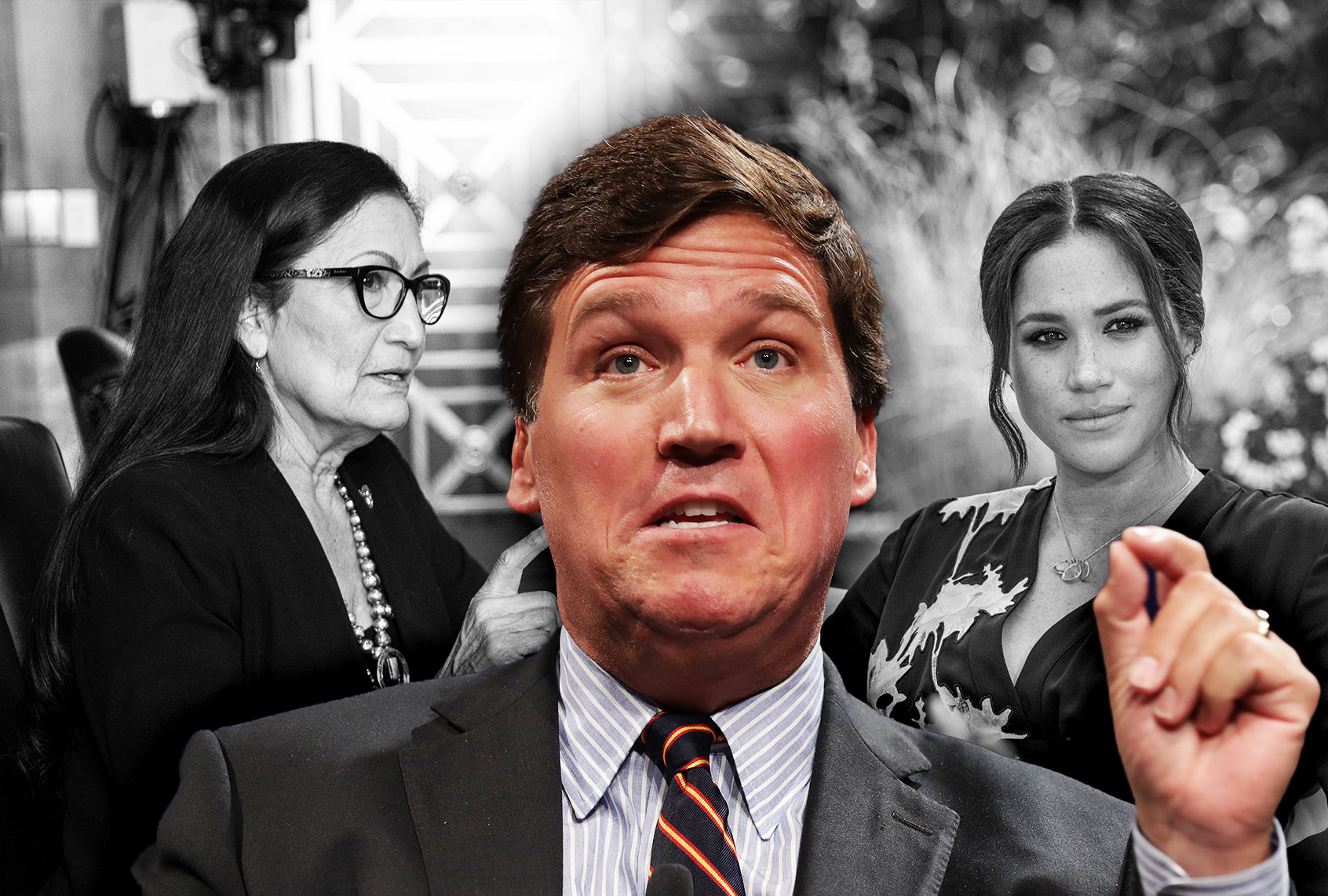 Tucker Carlson is celebrating this Women’s History Month by going off on one misogynistic rant after another. It should come as little surprise that as Congress was on the cusp of passing the largest economic stimulus in modern history, Carlson was busy attacking women from the House of Representatives to Hollywood to the military to the New York Times — but it’s surely been a bizarre spiral to watch. Within the last two weeks, Carlson has called pregnant soldiers “a mockery,” mocked Democratic Rep. Deb Haaland’s Native American ancestry, dragged Meghan Markle through the mud, and antagonized New York Times reporter Taylor Lorenz as being a “deeply unhappy narcissist.”

The Fox News host dedicated a portion of his show Tuesday evening to obsessing over Markle — all while claiming to not care at all about the drama surrounding the royal family. Carlson started a segment speaking about  Sunday’s Oprah interview during which the former Duchess discussed the lack of mental health resources within the institution, her suicidal thoughts, and racist questions about the color of her son’s skin from within the royal family.

“Meghan Markle is a narcissist,” Carlson said of the interview. After the resignation of U.K. TV host Piers Morgan, also known for baselessly slandering Markle repeatedly, Carlson complained: “You’re not allowed to make fun of this, and you’re definitely not allowed to mock the oppressed duchess. Our friend Piers Morgan just did that on television in the U.K., and had to resign from his job.”

Carlson then went on to berate New York Times reporter Taylor Lorenz, who has recently spoken out about her experience facing online harassment. He launched into a 9-minute rant about “self-identified victimhood,” calling Lorenz a narcissist for standing up for herself. He belittled Lorenz, who he called “far younger than prominent New York Times reporters used to be,” before adding, “she’s also much less talented” but “at the top of journalism’s repulsive food chain.”

Although criticizing female reporters is nothing out of the ordinary for Carlson, Lorenz said his rhetoric has given rise to multitudes of new online abuse coming her way.

“I hope people see this and recognize if for what it is,” Lorenz tweeted, “an attempt to mobilize an army of followers to memorize my name and instigate harassment.” On International Women’s Day, she tweeted a plea to consider “supporting women enduring online harassment.” Mentioning that it’s “not an exaggeration to say that the harassment and smear campaign I’ve had to endure over the past year has destroyed my life.“

Carlson is also now facing backlash for another attack he directed at women — this time those in the military.

“So we’ve got new hairstyles and maternity flight suits,” Carlson complained on his show earlier this week.“Pregnant women are going to fight our wars. It’s a mockery of the U.S. Military. While China’s military becomes more masculine as it’s assembled the world’s largest navy, our military needs to become as Joe Biden says more feminine, whatever feminine means anymore since men and women no longer exist. The bottom line is it’s out of control, and the Pentagon is going along with this.”

“The Secretary certainly shares the revulsion of so many others to what Mr. Carlson said,” Pentagon spokesperson John Kirby said U.S. Secretary of Defense Lloyd Austin on Thursday.

“Thousands of women serve honorably every day around the globe,” said General Paul E. Funk III. “They are beacons of freedom and they prove Carlson wrong through determination and dedication. We are fortunate they serve with us.”

And earlier this week, Carlson attacked Democratic Rep. Deb Haaland of New Mexico, who will be the very first Cabinet Secretary of indigenous descent.

“It seems a little weird to be ‘excited’ about an accident of birth,” Carlson said, adding that celebrating her ethnicity and historical context played into “immoral” identity politics.

Cooking chicken? Here are 5 easy comfort-food recipes that are anything but basic