Katu said he was not aware his client, Maina, who is answering to a 12-count money laundering charge the Economic and Financial Crimes Commission, EFCC, preferred against him and his firm, Common Input Property and Investment Limited, had through another lawyer, approached the court to summon 10 persons to appear as witnesses in the matter.

Among the 10 persons the former pension reform boss secured subpoenas to compel to testify in the matter included the Attorney-General of the Federation and Minister of Justice, Mr. Abubakar Malami, SAN, and former Acting Chairman of the Economic and Financial Crimes Commission, EFCC, Mr. Ibrahim Magu. Others are a renowned Lagos-based lawyer, Mr. Femi Falana, SAN, M.

Speaking to newsmen yesterday, Katu said he was not informed before the subpoenas were sought and obtained by his client, Maina. The senior lawyer said he had in furtherance of his defence for the Defendants, applied  for only three subpoenas which he said was to be issued against three banks, including the CBN. “I was not aware of the other 10 subpoenas. I did not apply for them,” he added.

Katu, SAN, who had been leading Maina’s defence team, had at the resumed proceedings in the case yesterday, notified the trial court of his decision to pull out of the case.

He said: “My lord, the matter is adjourned for continuation of hearing and for us to bring another witness today. But, before then, we have an application we are compelled to make.

“The application is to seek for leave of this Court to withdraw from this matter. In doing this, we appreciate the court’s indulgence.”

However, the Prosecution counsel, Mr. Farouk Abdullah, opposed the withdrawal application and urged the court to compel Maina and his defence team to proceed with the business of the day.

Abdullah contended that Maina’s lawyer, Katu, SAN, failed to fulfil the statutory condition precedent that would have paved way for him to withdraw from the trial.

“My lord, as rightly stated, this matter is slated today for continuation of defence. While we concede that a Defendant has the constitutional right to a counsel of his choice, and a counsel in the matter can also withdraw at any time he deems fit.

“However, our only reservation is the non-compliance to section 349(8) of the Adminstration of Criminal Justice Act, 2015.

“In view of the non-compliance of senior counsel to the provision of the extant law on withdrawal of counsel, we pray the court to refuse the application and direct that the business of the day be done”, Abdullah submitted.

Responding, Katu, SAN, prayed the court for a short adjournment to enable him to file a formal application to withdraw from the trial.

“In as much as he has stated the law as it is, which requires that I notify the court in not less than three days before the date fixed for hearing.

“We have complied with the section, in that we appeared for the first Defendant yesterday, and in attempt not to spring surprises on the Prosecution, I specifically told the prosecution, off record, of our desire to withdraw from this matter. Hence my inability to file a formal application.  May I humbly apply for a short adjournment,” Katu added.

Remarkably, Katu is the second SAN to withdraw from the trial.

It will be recalled that the previous defence lawyer in the matter, Chief J. K. Gadzama, SAN, pulled out of the case after his client, Maina, jumped bail and fled the country midway into his trial.

The former pension reform boss had shorty after he was arrested in Niger Republic and returned back to the country by the Interpol, engaged another lawyer, Mr. Anayo Adibe to handle his defence.

However, few days before the commencement of his defence to the charge, Maina brought in Katu, SAN, to take over from Adibe.

Meanwhile, in a bench ruling, trial Justice Okon Abang rejected Katu’s request to withdraw from the case, saying it was aimed “compound this case and hold the court to ransom”.

“The application to withdraw legal representation and cause confusion in this matter lacks merit and is accordingly dismissed”, Justice Abang held, even as he agreed with the Prosecution that Katu failed to comply with section 349(8) of ACJA, 2015.

Justice Abang noted that he had on December 21, 2020, after Maina announced his intention to call a total of 24 defence witnesses, adjourned the trial for over 76 days.

He said despite the long adjournment, Maina, waited until last Monday to apply for subpoena to compel witnesses to appear on his behalf.

Justice Abang disclosed that he was in his Chambers when the court clerk brought copies of subpoenas Maina filed to compel the appearance of 10 persons as witnesses. He wondered why Maina should approach the court to compel witnesses to attend proceedings the next day.

“I merely signed the subpoenas based on the decision of the Court of Appeal in the case of Olisa Metuh, in which he had applied to call Dasuki as a witness.

“Ordinarily, I could not had on my own, sign a subpoena to compel anybody to come before the court a day before hearing”.

He said Maina should have himself to blame if the subpoenaed witnesses fail to appear in court.

Meantime, following the dismissal of his oral application to withdraw from the case, Katu, SAN, told the court that Maina’s second witness, DW-2, whose name was given as Charles Enakaeno, had an accident and was unable to attend the proceedings.

He, therefore, persuaded the court to adjourn the matter till Thursday. 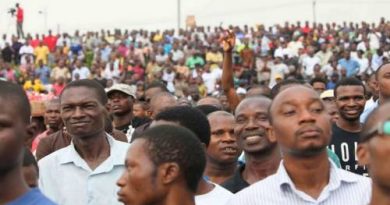 Youths As Motor Forces Of History By Andrew Moses

President of OSHA Ghana, Thomas Bismark Boakye, who is a retired officer of the National Road Safety Authority says current