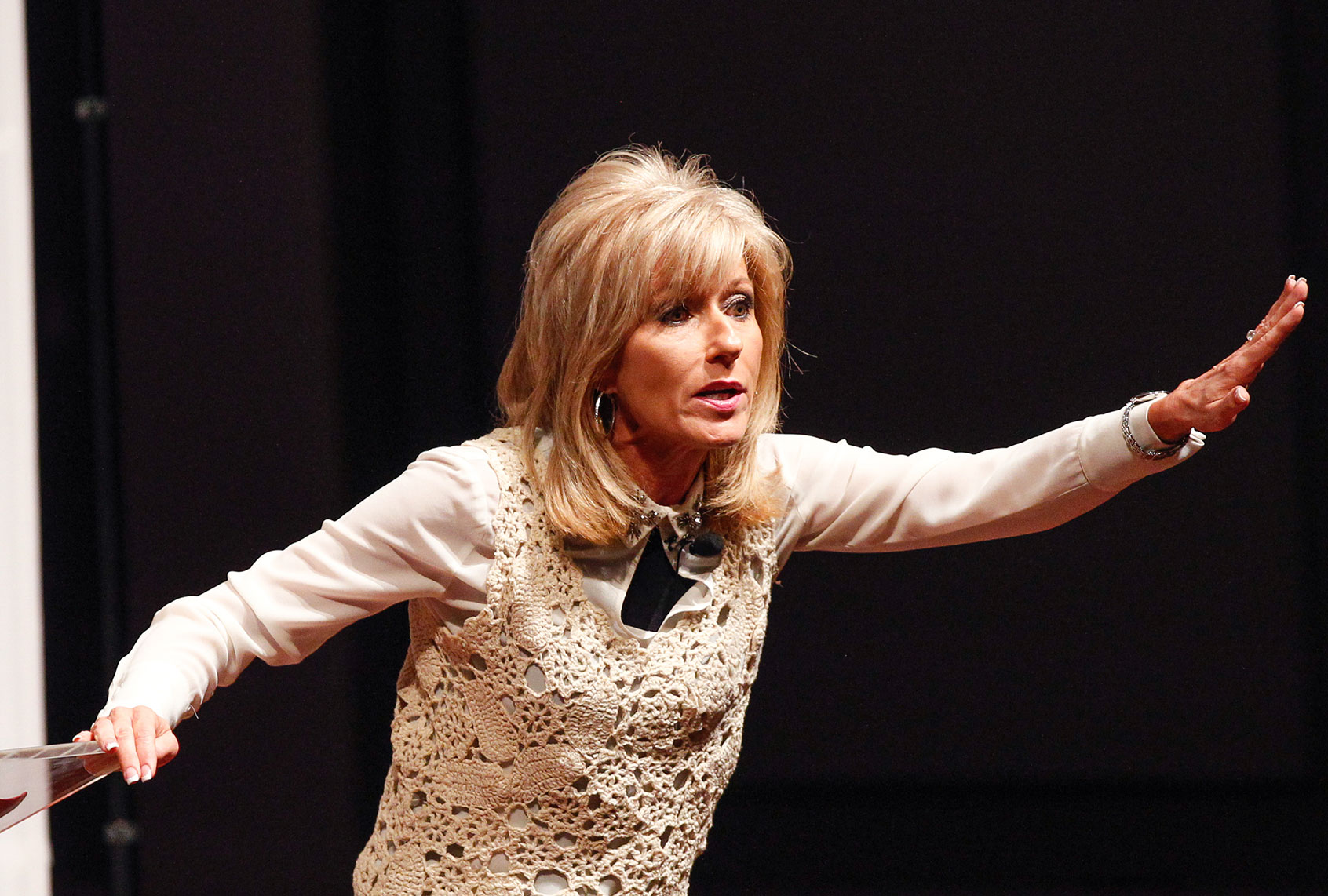 Beth Moore has been viewed for decades, as the “Evangelical Julia Roberts meets Oprah,” according to Anne Helen Peterson’s recent “Culture Study” newsletter. Moore has published over 20 Bible studies, and her Living Proof conferences drew thousands of women who would pack into stadiums to hear her speak about topics like insecurity, forgiveness and godliness. A 2008 simulcast of her speaking called “Living Proof Live” is estimated to have been watched by over 70,000 people at 715 locations.

As a Southern Baptist, Moore established herself as a singular voice in a denomination that is dominated by male thought leaders, and offered a generation of evangelical women an opportunity to see themselves in her and through her work. Now, however, Moore has announced she’s breaking from the Southern Baptist Convention largely because as a sexual assault survivor, she couldn’t reconcile with evangelicals’ overwhelming, hypocritical support of Donald Trump. This raises the question of whether her followers, and other women, will follow suit.

LifeWay Christian Resources, the publishing division of the Southern Baptist Convention which has published her books in the past, also confirmed the break with Moore.

The rift between Moore and the Southern Baptist Convention began in 2016, days after the Access Hollywood tape, in which former president Donald Trump bragged about grabbing women’s genitals without their consent.

Moore tweeted at the time, “I’m one among many women sexually abused, misused, stared down, heckled, talked naughty to. Like we liked it. We didn’t. We’re tired of it.”

She followed up by encouraging Christians to “wake up” to the environments of entitlement that women have had to navigate. “Are we sickened?” she tweeted. “Yes. Surprised? NO.”

As she told Religion News Service, she was disheartened that Trump ascended to become “the banner, the poster child for the great white hope of evangelicalism, the salvation of the church in America.” She also expressed shock that he was so embraced by the denomination — one that has long contributed to and been guided by “purirty culture” — despite Trump’s cavalier attitudes towards sexual assault.

However, if you’ve paid attention to news surrounding evangelical leaders over the last several years, it’s not surprising. In 2020, former Liberty University president Jerry Falwell Jr. tumbled into one scandal after another, before finally, officially plummeting from grace.

It began in 2019 when, as Politico reported, former Trump attorney Michael Cohen helped “clean up racy ‘personal’ photographs” of Falwell’s wife, Becki, including one of her in a French maid costume, which Falwell had allegedly sent to a number of employees at his evangelical university.

Then there were the photos of Falwell that surfaced last August, showing him with his pants partially unzipped and his arm around a woman whom he later claimed was his wife’s assistant. Two weeks later, he claimed that his wife had engaged in a “fatal attraction type” affair with Giancarlo Granda, a former pool attendant-turned-Miami businessman. Granda then released a statement of his own claiming that Falwell both knew of and observed his sexual relationship with Becki “from the corner of the room.” Later, he posted a statement on Twitter describing Falwell as a “predator,” who had sent Granda an image of a female Liberty University student exposing herself at their farm.

The hypocrisy felt overwhelming, as students at Falwell’s university are all required to adhere to a strict code of conduct called “The Liberty Way,” which forbids premarital sex, same-sex relationships, alcohol and “obscene language,” while also requiring that students “dress modestly at all times.”

It’s worth noting that Falwell was an adamant supporter of Trump, and that he wasn’t the only predator. Since 1998, about 380 Southern Baptist leaders and volunteers have faced allegations of sexual misconduct, as the Houston Chronicle and the San Antonio Express-News reported in 2019. They also found that in the past 20 years, more than 700 victims have been abused, with some urged to have abortions and “forgive their abusers.”

Their investigation came after, as I reported in 2018, there was a call to put together a register of “Southern Baptist clergy and staff who have been credibly accused of, personally confessed to, or legally been convicted of sexual harassment or abuse.”

Instances of sexual assault and hararssment are both enmeshed in the denomination’s fabric and rarely brought to light. Those who perpetuate the abuse rarely see consequences when it comes to their standing in the Convention.

Take, for example, a 2018 case when the Southwestern Baptist Theological Seminary president Paige Patterson — a key figure in the denomination’s resurgence over the past decade — was fired when the board of trustees found that he had “lied about his treatment of an alleged rape victim in 2003, and that in 2015 he tried to meet, with no other officials present, with another woman who had reported a sexual assault so he could ‘break her down,'” according to the Washington Post.

Additionally, Tennessee megachurch pastor Andy Savage stepped down that year from his position after confessing to having had sexual contact 20 years ago with Jules Woodson, who was at the time a high school student in the group he led as youth pastor. While Savage describes his actions as a “sexual incident,” Woodson wrote that Savage drove her to a deserted back road, sexually assaulted her, then asked for forgiveness and pleaded with her “not to tell anyone what had just happened.”

Some congregants hoped these headline-grabbing incidents would cause change, and leaders spoke about said change broadly.

“The #MeToo moment has come to American evangelicals,” wrote Albert Mohler, president of the flagship Southern Baptist Theological Seminary, on Facebook in 2018. “And I am called to deal with it as a Christian, as a minister of the Gospel, as a seminary and college president, and as a public leader.”

However, Southern Baptist support for Trump didn’t waver through his presidency, nor his attempt at re-election, and there’s a possibility that as key female figures like Beth Moore exit the denomination, other women may go with them — especially those who have been victimized by men in church leadership.

There’s a growing precedent for women looking to leave the denomination. As Sarah Stankorb wrote in her piece “These Evangelical Women Are Abandoning Trump and Their Churches,” women all over the country were having crises of faith because male leadership supported “the thrice-married, profane, biblically illiterate, sexually predacious candidate [who] mirrored no beatitudes,” all while demanding their sexual purity.

Purity culture wasn’t really about the sanctity of the family, but the subjugation of women, Rev. Carol Howard Merritt, minister and author of the 2018 book Healing Spiritual Wounds, told Stankorb. Women who had been taught not to even “front hug” male friends for fear of stirring their sinful sexual impulses watched as Donald Trump became entangled with evangelical culture. “He could go around talking about grabbing women by their pussies, but women were shamed for any sort of sexual act before marriage,” Howard Merritt says. “The hypocrisy of it just became massive.”

And that hypocrisy and sexism, combined with female leaders like Moore leaving the denomination, could cause an exodus of emboldened, like-minded women.

Kate Bowler, a historian at Duke Divinity School who has studied evangelical women celebrities, said Moore’s departure is a significant loss for the Southern Baptist Convention. Bowler told the Religion News Service that Moore is one of the denomination’s few stand-alone women leaders, whose platform was based on her own “charisma, leadership and incredible work ethic” and not her marriage to a famed male pastor.

“Ms. Moore is a deeply trusted voice across the liberal-conservative divide, and has always been able to communicate a deep faithfulness to her tradition without having to follow the Southern Baptist’s scramble to make Trump spiritually respectable,” Bowler said. “The Southern Baptists have lost a powerful champion in a time in which their public witness has already been significantly weakened.” 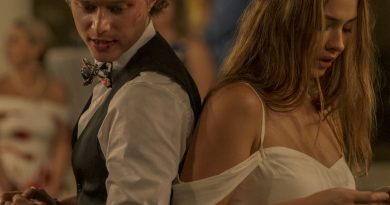 Outer Banks Season 2: Everything We Know

We are all germophobes now

Perspective in a challenging time