In view of the worrisome cases of insecurity in Nigeria, a traditional ruler, Oba Abdulwhab Abiodun-Oyeyemi, the Alatanda of Atanda community in Ifelodun Local Government Area of Kwara State has called on the federal, state, and local governments to empower them with logistics to fight the menace.

The monarch who expressed the readiness of traditional rulers to partner governments in curbing insecurity in the country described it as the only option that could save Nigeria from her current travail.

The royal father stated this at the weekend during his 21st coronation anniversary and launching of an ultra-modern central mosque in Atanda community.

Well over N6 million was realised during the launching of the community’s central mosque.

The monarch said: “We cannot continue to watch while our security situation is going from bad to worst every day, going by the stories of banditry, and kidnapping among others happening particularly in the North, that we read every time.

“We are the closest to the people at the grassroots and there is nowhere in this country that does not have a traditional ruler or Baale that is in control.

“We are also in firm control of our custodians, culture, and tradition which are very potent at times like this because they worked for our forefathers. We are therefore capable of fishing out the bad eggs in society.

“So, the federal, state and local governments must deliberately provide logistics for traditional rulers across the country to provide a respective security system that would be most suitable and effective to tackle this problem.”

The traditional ruler, said the challenges of insecurity being experienced in many parts of the country are impacting negatively on the nation’s economy hence the urgent need to take action now.

The royal father also advised the original inhabitants of Atanda to be accommodating so that peace would continue to reign in the community.

He appealed to Governor AbdulRahman AbdulRasaq to assist the community with the provision of basic amenities that would check rural-urban migration.

Oba Abiodun-Oyeyemi said that the grading of the only road linking the community with Koko, the water project, and construction of blocks of classrooms were through self-help by indigenes of the town hence the government should come to their aid.

The Chief Imam of Offa, Sheikh Muyideen Husein, in his remark called on traditional rulers and those in positions of authorities to always endeavour to leave good legacies that would make coming generations pray for them

He also called on Nigerians to shun destructive tendencies capable of retarding the growth and development of the society. 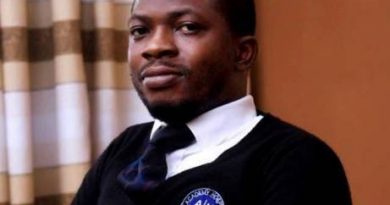 Allyson Felix On the Tokyo Olympics, Naomi Osaka, and ‘Taking Space’ as a Black Female Athlete