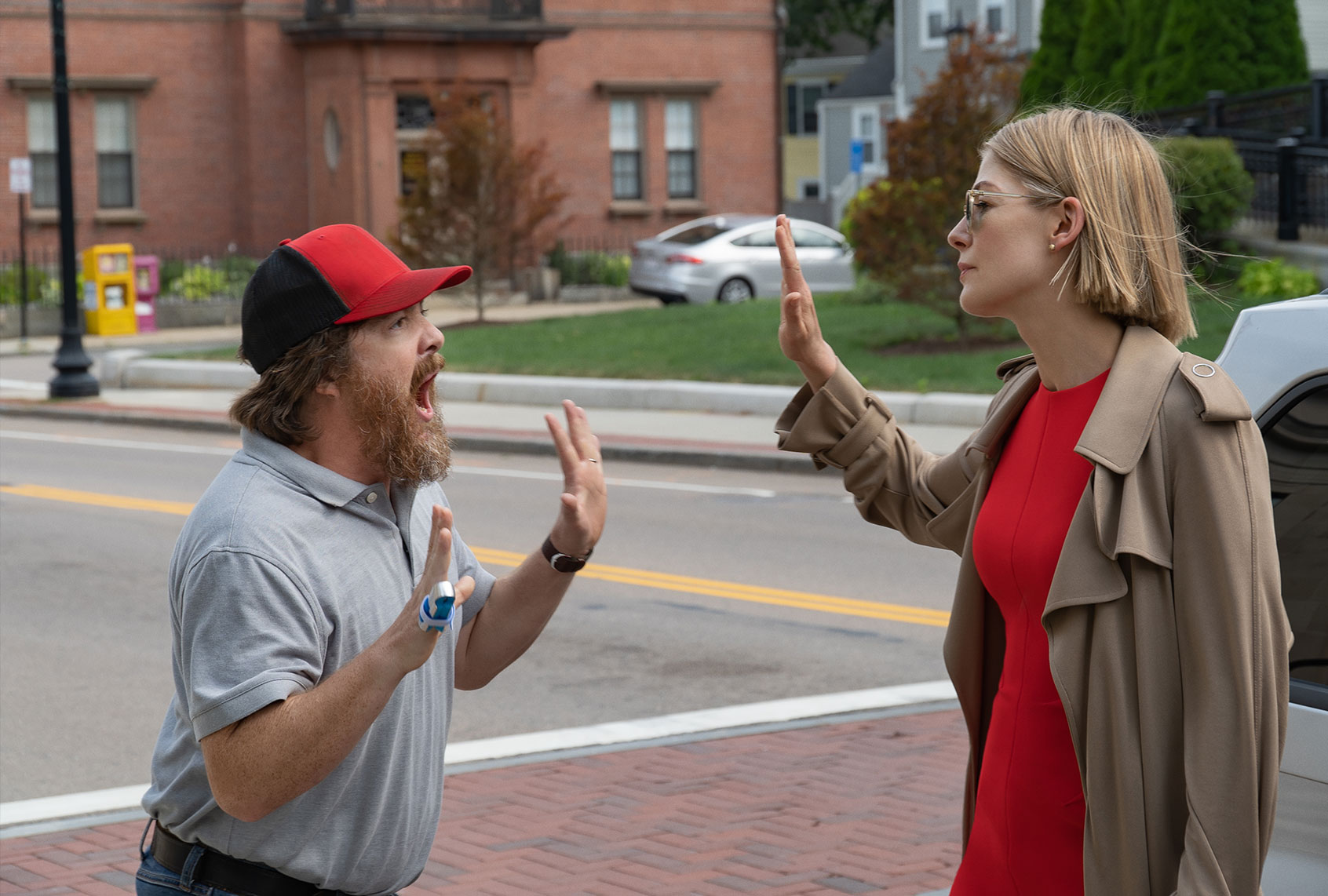 In an early scene in Netflix’s “I Care A Lot,” Marla Grayson (Rosamund Pike), a professional legal guardian, sits behind her desk while mafia lawyer Dean Ericson (Chris Messina) not-so-subtly threatens her. Messina’s character wears three-piece suits and looks culled from the pages of GQ, albeit with a couple day’s too much stubble for a male model. He oozes masculinity.

Marla does not want him there. By conniving with a doctor, Marla has just been handed the guardianship of a woman named Jennifer, whom she sent to a retirement home (without her consent) when she took control of all of Jennifer’s assets. Dean presents himself to Marla as Jennifer’s lawyer, and insists that there has been a mistake regarding Jennifer’s debilitated status.

Marla lies to Dean, and tells him that Jennifer’s condition suddenly deteriorated two weeks ago. “That’s simply not true, Ms. Grayson,” Dean exhorts. “You know it, I know it. If the doctor wrote a note, he knows it too.”

“She,” Marla quickly corrects. “The doctor. She’s a she.”

This bitter riposte is at the heart of Marla’s worldview: men, as she says, are out to defeat her. Fittingly, her coworkers — or henchwomen — are almost entirely women, as is the doctor that she works with to subjugate unwitting seniors.

The asterisk to Marla’s feminist ethos is that this large cabal of girl power is doing tremendously evil things. The doctor helps Marla find innocent seniors and legally kidnap them through the courts, stripping them of control of their assets so that Marla can profit as their guardian. Indeed, those who try to get in her way often are men — frequently lawyers and family members of the conned seniors. But her men-versus-women worldview is a severe misapprehension.

And this is where the movie’s politics get interesting.

Marla epitomizes the modern ideal of a “girlboss”: the lady entrepreneur whose success is defined in opposition to the masculine business world in which she swims upstream. The term, often written with a hashtag, became popular around 2014 with the publication of the eponymous book by Sophia Amoruso, the founder of retailer Nasty Gal. In a retrospective on the neologism published in The Atlantic, Amanda Mull described the philosophy of #girlboss-ism as a kind of “convenient incrementalism.” Writes Mull: “Instead of dismantling the power men had long wielded in America, career women could simply take it for themselves at the office.”  She continues: “Like Sheryl Sandberg’s self-help hit ‘Lean In’ before it, ‘#Girlboss’ argued that the professional success of ambitious young women was a two-birds-one-stone type of activism: Their pursuit of power could be rebranded as a righteous quest for equality, and the success of female executives and entrepreneurs would lift up the women below them.”

That describes Marla to a T: convinced that her relentless conning of seniors is some type of righteous quest for equality. Yet unlike the platonic ideal of a girlboss, Marla’s business is deeply immoral. And her “clients,” the people whose lives she destroys, are both old men and women. It seems some women can have it all — but only if other women have nothing.

An entire wall of Marla’s office displays pictures of all her “wards,” whom she marks with flair to indicate particularly lucrative marks. And while she’s an equal opportunity exploiter of seniors, it’s a bit of clever screenwriting that the senior who upsets her entire scheme is a woman, too (played with aplomb by Dianne Wiest).

Marla’s evil countenance — and ultimately, her comeuppance — is a stinging indictment of the girlboss breed of feminism, and surprising politics for a Netflix movie, too. “I Care A Lot” complicates the neoliberal feminist message in a surprising way that I’ve never seen before on film. Specifically, it points out the immorality of capitalist feminism, the way that it relies on exploitation.

Strip away Marla’s borderline-legal industry, the guardianship world, and her message and politics are indistinguishable from so many other feminist capitalist CEOs in the world. Facebook’s COO Sheryl Sandberg became a household name when she published “Lean In,” a hybrid business book and feminist manifesto. The 2013 book was a best seller, lauded for its message of empowerment and Sandberg’s egalitarian vision for a post-gender world. “A truly equal world would be one where women ran half our countries and companies and men ran half our homes,” Sandberg writes.

Sheryl Sandberg and the fictional Marla Grayson’s compartmentalized ethics are so similar that it seems impossible that Marla isn’t at least partially based on Sandberg or perhaps Amoruso, too — who famously sported an eerily similar haircut to Rosamund Pike in the film, and whose company went bankrupt a few years after the celebrated publication of “#GirlBoss” that lauded her business acumen.

The brilliance of “I Care A Lot” is that it illustrates how exploitation of other humans (regardless of gender) is key to so much of capitalism. Sure, Marla’s guardianship business is an extreme case, but it serves as a metaphor for capitalism at large, as it’s a means to an end for Marla — who desires power and money more than anything. Never is she happier in the film then when she is reveling in her wealth or success — “success,” in this case, meaning stripping another unwitting senior of their freedom and ripping their assets for Marla’s extraction.

It’s a fascinating counterpoint to another recent film, “Promising Young Woman,” which had a clearer feminist message in that it excavated how men — even so-called “good” men — can be complicit in cultivating atmospheres that enable sexual assault and rape. The men in that film were occasionally apologetic, but never redeemable.

But in “I Care A Lot,” Marla is irredeemable. As if stripping her charge’s assets and consigning them to a prison-like existence weren’t horrific enough, she treats Jennifer even worse when she finds out she has a lawyer on her side: taking away Jennifer’s phone and instructing the nursing home staff to drug her in ways that will torture her mentally. You go, girlboss.

I see “I Care a Lot” as a warning against this kind of “defanged feminism,” as Dawn Foster calls the Sheryl Sandberg ethos. Stripped of any larger structural understanding of one’s role in a larger universe of exploitaiton and labor, the barbarity of Marla’s “business” is horrible to behold. Thus, Girlboss Marla is a profoundly execrable character — a warning for what happens when one’s feminism is insular and detached from any larger moral universe.