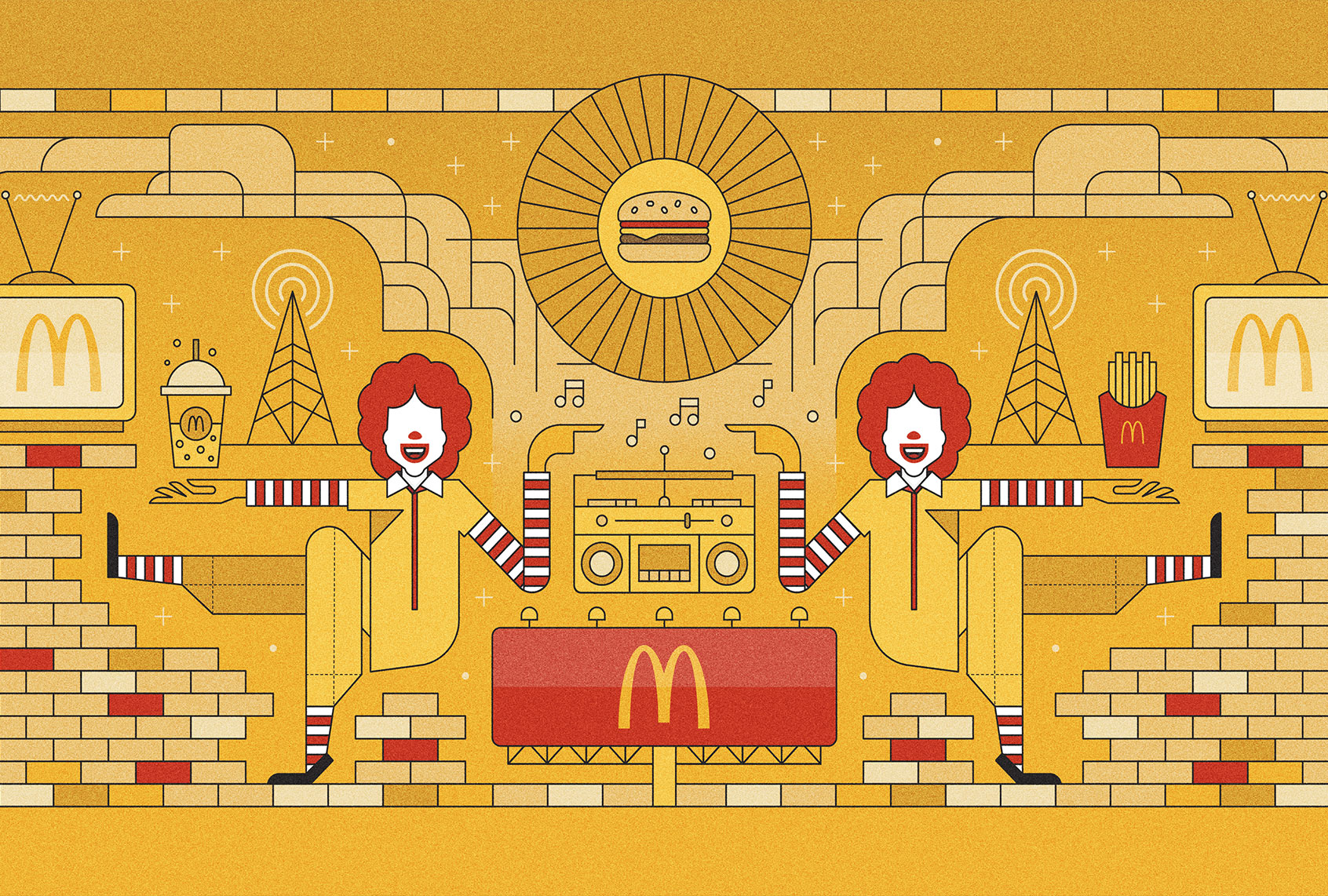 But, as Taylor told Salon in an interview, the advent of the McDonald’s “I’m Lovin’ It” melody isn’t just a good story. It’s an example of strategic sonic logos and branding, a concept that — in a world that is increasingly saturated with competing rich audio projects and podcasts — is gaining some serious traction.

“I think what they were trying to do is make the sound of McDonald’s just as recognizable globally as their arches,” Taylor said.

The entertaining and illuminating episode —which you can listen to below — reveals how in the early 2000s, McDonald’s public image was faltering. People were starting to view Ronald McDonald as an emblem of childhood obesity instead of just a, uh . . . friendly neighborhood clown? The company’ stock price was at a seven-year low and company executives knew they needed to shake things up.

A global call went out to advertising agencies asking them to pitch the next McDonald’s catchphrase and jingle. Heye & Partner, a German company, won with the proposed phrase “ich liebe es,” which roughly translates to “I’m lovin’ it.” Then German music house Mona Davis, led by president Tom Batoy and his business partner Franco Tortora, stepped in to set it to music.

According to the episode, the duo scrapped numerous ideas until they came up with those ear-catching five notes after a long night “and lots of wine.” The impromptu melody stuck, and then the hard work began of attempting to tune it to fit what would become McDonald’s first global ad campaign. The song, and the phrase “I’m lovin’ it” had to work in every country with McDonald’s restaurants.

“I’m Lovin’ It” has endured for nearly two decades, including renditions featuring Pusha T, Destiny’s Child and the “Despicable Me” minions. Now, all across the world, people can hear “ba da ba ba ba,” even without the “I’m lovin’ it” tag, and envision a Big Mac.

“Jingles usually have words attached to them, whereas sonic brands are usually very short and may not have any words, like the Netflix ‘ta-dum,'” Taylor said. “Whereas ‘I’m Lovin’ It’ is something that crosses both of these. It’s just brilliant when you put a lot of time, effort, money and thought into this, you start to get something that crosses these boundaries.”

The genre-bending nature of the “I’m Lovin’ It” sonic logo is, per Taylor, a seminal example of how sound can become intrinsically tied to a brand, but not without a tremendous amount of strategy.

“Behind every successful jingle, every successful sonic brand, they all have one thing in common: seriousness in topic and strategy,” Taylor said. “As somebody who works in sonic branding, too, with my side company, we find things don’t work when someone comes in and is like, ‘Oh, we just need a sound that’s kind of like Netflix.’ That doesn’t do justice to the brand. You want to put as much thought into it as you would a visual logo.”

According to Taylor, interest in sonic logos skyrocketed after “I’m Lovin It'” and then again after the release of the Netflix “ta-dum.” Brand managers think a lot about how their company’s commercials or logos make people feel, but not necessarily how sounds associated with a brand consumers respond.

However, some people have visceral reactions to the sonic cues that are all around us. Taylor points to that horrendous “buzz-buzz-buzz” emitted by many card chip readers. It’s enough to make many customers recoil (but it’s also harsh enough that customers won’t forget their cards). There’s also the warm little jingles that many modern washers and dryers play after finishing a cycle, which, according to this ad industry piece on sonic branding, is intended to help owners associate a happier brand emotion with the onerous task of doing laundry by offering a “victory” song when the washing and drying is complete.

When many companies start thinking about associating sound with their brand, Taylor said, they veer futuristic, choosing something “space-y” or robotic. “And I think that that’s a worry for being dated — it’s like going to Disneyland and going into Tomorrowland, right?” Taylor said. “It almost has the opposite effect.”

McDonald’s, however, purposely tied “I’m Lovin’ It” to what was hot in the early 2000s. They collaborated with one of the biggest musicians of the day, Justin Timberlake, paying him $6 million to sing the full-length song  “I’m Lovin’ It” — which had nothing to do with McDonald’s and which was mysteriously “leaked” months before the company’s global “I’m Lovin’ It” campaign released.

As a result, that sound became immediately tied to pop culture (something McDonald’s is really good at, as Salon covered in the “Saucy” column about its infamous Szechuan Sauce) and could be continuously rebooted as cultural tastes shifted. The fact that it’s been around for almost two decades is a huge success in and of itself, Taylor said.

“I think that their original goal of crystallizing the sound of McDonald’s, like their arches was well achieved through that,” he said.

Listen to the “Twenty Thousand Hertz” episode “I’m Lovin’ It” below or wherever you get your podcasts:

Six months later: What have we learned from Jan. 6? Not enough to stop it from happening again

The battle against the novel COVID-19 pandemic has been described by a Catholic Priest, Rev. Fr. Gorden Nibeen, as the