A bill seeking to amend the National Drug Law Enforcement Agency (NDLEA) law to check the incidence of light sentencing for drug offenders, has passed second reading in the Senate.

This followed the presentation of the lead debate on the general principles of the bill by the sponsor, Sen. Dimka Hezekiah (Plateau Central), during plenary, on Tuesday.

The bill entitled, “a Bill for an Act to amend the National Drug Law Enforcement Agency Act CAP N 30 Laws of the Federation of Nigeria, 2004.” was read for the first time on Thursday, Dec. 19, 2019, according to the sponsor.

“The National Drug Law Enforcement Agency Act Cap. N 30 Laws of the Federation of Nigeria, 2004 provides for stringent penalties for persons involved in the importation and exportation of hard drugs such as cocaine or heroin.

“These penalties range from life imprisonment to 15 years which is the minimum penalty’’.

Hezekiah, however, raised concerns that in spite of the fact that the Supreme Court had held that the minimum penalty for those dealing in hard drugs was a term 15 years, some judges of the Federal High Court had continued to pass ridiculously light and illegal sentences on convicts.

“Rather than a term of imprisonment of 15 years, the maximum sentence passed on any convict was a term of 3 years for heroin. Some of these have been as low as 4 months imprisonment for 1.44 kg of cocaine.

“Worse stil,l is the fact that when some of the Judges pass these light terms of imprisonment, the convicts are further given options of fines, which are not provided for under the NDLEA Act.

Hezekiah further said that the arbitrariness that was being perpetrated by the trial judges by not following the provisions of the Act could lead to corrupt practices and encouragement of the drug trade.

He said that the proposed amendment would close any loopholes by having a clear, unambiguous and unequivocal provision that judges could not vary the sentences provided by the Act.

“There is equally a minor but significant error in the principal Act; the word ‘heroine’ instead of ‘heroin’. The two words mean different things and are not synonymous.

“An amendment is, therefore, being proposed to change the word “heroine” which means a girl or woman who does something brave or good to “heroin” which means a powerful illegal drug made from morphine which is intended in the Act.”

Supporting the second reading of the bill, Sen. Istifanus Dung (PDP-Plateau), said the prevalence and menace of drugs and its destructive effects on the lives of citizens, particularly youths had attained an alarming stage.

“A whole generation is at risk of been lost to drugs. The production and sale of illicit drugs require strong regulation and enforcement powered by NDLEA.

“And this bill is seeking to strengthen and stiffen the sanctions against drug abuse in such a way that it will end in breaking and ending the destructive drug trade.”

Dung further said that one of the ways to address the menace was to restrict access to drugs, adding that without stiffer sanctions, drug barons would persist in their nefarious practices.

Also, speaking, Sen. Abba Moro (PDP-Benue) said that the bill “is germane to the circumstances in which we find ourselves here”.

“The scary situation in which we find ourselves in this country today emanates partly from a combination of factors of proliferation of firearms and light weapons.

“The second dimension to our very scary security situation is the question of drugs.”

He said that what the country had in its circumstances, was not necessarily the absence of laws and the absence of enforcement of laws, but the presence of some loopholes in such laws.

“The loopholes we have in our laws provide avenues for criminals to evade the enforcement of our laws,” he said.

Moro added that amending the NDLEA Act would make enforcement of drug laws easy and effective.

In his remarks, President of the Senate, Ahmad Lawan, referred the bill to the Senate Committee on Drugs and Narcotics and to report back within four weeks. 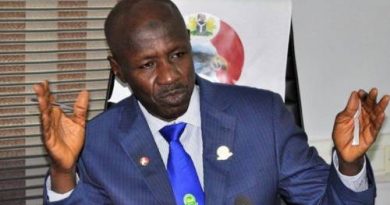 Ibrahim Magu: A Case For Fair Hearing By Godwin Onyeacholem