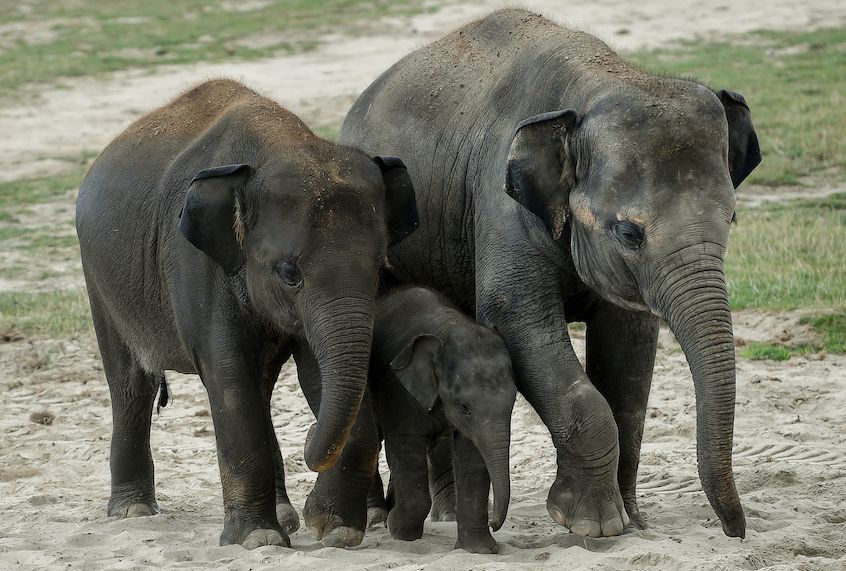 Elephants may not resemble humans in the slightest, yet their behavior is often eerily similar to our own. Elephants are known to grieve for their lost loved ones, and experience trauma and post-traumatic stress disorder in reaction to events that would induce the same in humans.

These beloved creatures, the largest land animals in the world, have been the subject of Dr. Caitlin O’Connell’s research for decades. A renowned behavioral ecologist, O’Connell co-developed the award-winning Smithsonian documentary “Elephant King” and has studied elephants in the wild for the last thirty years. O’Connell currently teaches at the Eaton Peabody Lab at Harvard Medical School and has also taught creative science writing for Stanford University and The New York Times.

Yet those aren’t the sole reasons I was curious to interview Dr. O’Connell. I also wanted to do so because she has a wonderful new book out called “Wild Rituals: 10 Lessons Animals Can Teach Us About Connection, Community, and Ourselves.” O’Connell’s book reveals the rituals used by a wide range of creatures, from mammals to birds, and boldly argues that we can apply what we know about animal interactions to our own day-to-day lives. In other words, it’s not merely a story of wildlife or a rumination on what human nature really is, but somewhere in-between.

America is now nearly a year into the grips of a terrible pandemic, and the ongoing threat of climate change is endangering many of the animals that O’Connell and others like her (myself included) so dearly love. Perhaps now is the time to learn from nature as to how we can protect our future.

Your book discusses the animal rituals of different creatures, such as whales, apes, elephants, rhinoceroses, flamingos and zebras, to name merely a few. What inspired you to look at these animal rituals and apply them to human behavior?

That’s a very good question. I have been studying elephant behavior for the past 30 years. During that time, I have seen many different animals engage in rituals that are so strikingly similar to our own. They really are just like ours. It occurred to me that many people don’t really connect our rituals with the rest of the animal kingdom, and I thought it would be an inspiration to see how important these rituals are to other animals as a reminder of how important they really are to us and how interconnected we are with other animals.

Obviously this interview is occurring in the context of a coup attempt that occurred in the Capitol. We’re dealing with a global pandemic. We’re dealing with climate change that is destroying our ecosystem. Do you think any of the observations from your book are applicable in terms of major stories in not just the news, but human history right now?

Absolutely. I’ll address them in the order that you mentioned them. In this very shocking coup attempt, there is a precedent for this kind of behavior throughout human history, and it’s a warning call for us that this kind of very powerful energy is derived from a fascinating evolutionary history of groups. There’s a chapter in my book called “Group Rituals,” and why group rituals evolved, anthropologists believe, is that early humans needed to work together in order to hunt and to succeed at hunting. We needed to build coalitions and develop trust and build deeper bonds with each other. And so these group kinds of rituals were used to facilitate these deeper bonds. And this is true for many animals to form alliances to coordinate a hunt, just as it similar for humans.

But then these rituals over time, they are so powerful that we have to wield them in a way that we’re careful about them. There are many current research studies showing that people that are within a group recognize the symbols and — I hate to say the symbols that were used during the coup attempt, [like] the red hats and other things, I won’t even bother to mention them — but they bring you into that group and make you feel like you have an identity with this group and are bonded with this group. Whereas the people that are outside that group, you view as the enemy. These kinds of rituals have existed throughout our human history, but it’s our responsibility to rein in the downsides of those group rituals. Group rituals should be an inclusive, beautiful things that develop bonds within our family and within our groups, whatever those groups might be, a religious group or a community group. But to turn insular and look at other groups as the enemy, that is where it’s gone horribly wrong. And so that’s how the book relates on a political level.

Talking about the pandemic and this inside-outside, the anti-maskers versus the maskers. Seeing as we all have to wear masks and social distance during the pandemic, we miss getting to hug, shake hands and smile at each other. These simple rituals that we all took for granted are critical to our wellbeing, and having to deprive ourselves to keep everyone safe has been hard on everyone. We’ve got so many ways that we have been divisive in our society over the past few years. And the pandemic reminds us of how important [it is] being in touch with each other socially and physically, tactile rituals and grieving rituals, seeing each other, looking each other in the eyes, smiling. And we can’t smile to each other these days because we’re all wearing masks, and that smile releases oxytocin in the brain and actually makes you feel better. Smiling is contagious, and it brings a positive mood to the group so that these are some of the reasons why, in a pandemic, we’re actually hurting ourselves with this isolation because we are by nature social animals, and to isolate ourselves does real psychological and even physiological damage.

Let’s talk about broader lessons, not specific to the news cycle, but just in terms of human relationships. For instance, you discuss in your book how animals can be very caring toward each other and very affectionate. What would you say people could learn from, say, elephants in order to improve their own relationships and be happier in their own lives?

There are so many things that elephants have taught me about ourselves and the importance of, for one, tactile interaction. Male elephants, particularly adult male elephants, are very tactile with each other within bonded groups. They’re either putting a trunk over the head or shoulder or touching each other with a trunk or ears or rubbing their ear on the side of another. They’re extremely physical. And if you watch male elephants for a certain amount of time, it kind of feels like you’re in a bar with a bunch of buddies where they’re backslapping, and different kinds of fancy handshakes when they’re really enthusiastic to see each other. Male elephants have a type of handshake where they’ve placed their trunk in the other’s mouth as a greeting, and they’ll do that to each other at the same time, or also wrap trunks. There’s a lot of this tactile and visual and vocal communication that just shows you how similar they are in expressing themselves within these bonded groups.

Another example is to see two adult females, a mother and a grandmother, helping each other to get a baby who’s stuck in the mud out of the mud, and coordinating their behavior. Without much effort, they both just kneel down, take their trunks and scoop the baby out. And seeing that, versus a young mother who doesn’t have a very strong connection, she struggles to get her baby out and struggles to coordinate a group and gets really nervous, and it’s similar in humans with a young mother who doesn’t have that much experience versus a grandmother and a mother with a lot of experience.  They just come in and show everyone else how it’s done. And that’s pretty powerful.

I think one more example that I love is the fact that elder elephants, when they get old, they naturally will die of losing their last tooth. They have six sets of teeth in their mouth and as the last one drops out, they aren’t able to chew their food. And in some situations, young bulls will follow around an elder and chew their food for them. And that’s just such a stunning example of how other animals that have these bonds within society and how we treat our elders, and just to see how elephants care about each other. It’s a reminder that we should be caring about each other just as much and how special these other animals are in relation to our own society. We tend to think of ourselves as above the rest of the animal kingdom, when in fact we are among the other animals within the animal kingdom.

Dr. Caitlin O’Connell’s book, “Wild Rituals: 10 Lessons Animals Can Teach Us about Connection, Community, and Ourselves,” was released on January 12, 2021 from Chronicle Prism books.

Why a new coronavirus mutation has some scientists worried

The Police in Esiama have foiled a robbery attempt on the Ecobank Esiama branch in the Western Region. Early on