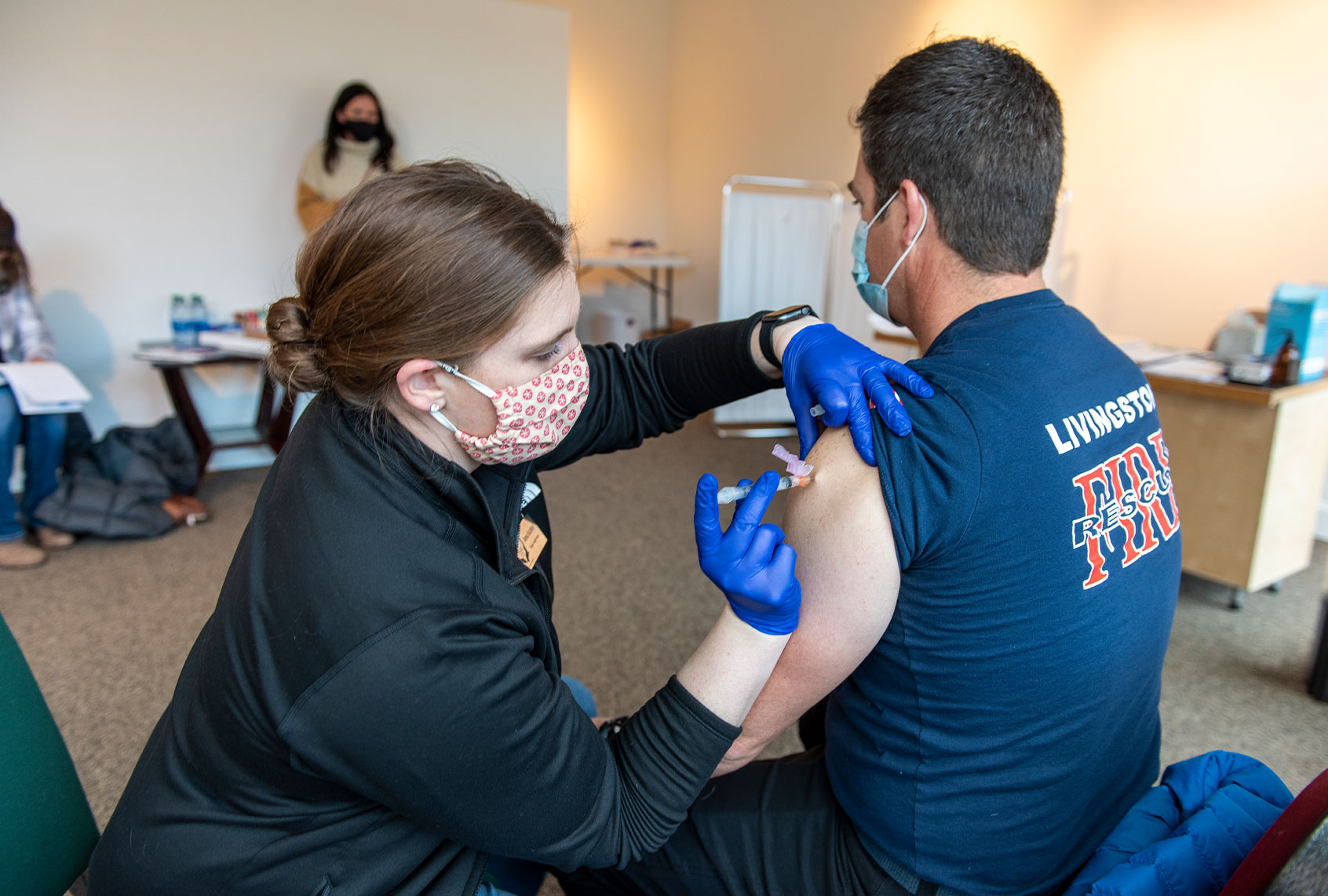 On Drew Zipp’s first day as a volunteer at the COVID-19 vaccination center at Broadbent Arena in Louisville, he wasn’t sure what to expect. Perhaps, as someone who doesn’t work in the medical field, the first four-hour shift would be a training — or perhaps he would file paperwork. Instead, to his surprise, he was right in the middle of the action.

Zipp watched the pharmacists load up syringes with the Moderna vaccine on to a tray. Then the 42-year-old Zipp took the tray and ran it to one of the five injection stations, handing it to the medical professionals who conducted the inoculations.

“I was a little surprised in some ways,” said Zipp, whose day job is as a designer. “I thought I’d be arranging paperwork, directing traffic or something a little bit less critical on day one, but it was like, ‘nope, someone’s going to carry these from the loading station to the injector people.'”

While Zipp said he’s happy to help his community, there is another incentive that will keep him coming back for another nine shifts: getting bumped up higher on the vaccine list.

“If you work for 40 hours, which would be 10 shifts, then you can get on a list to then get the vaccine,” Zipp said.

Indeed, Zipp’s experience is emblematic of the country’s “war time” approach to vaccinate Americans as it taps non-clinical volunteers to speed distribution. Since the US Food and Drug Administration (FDA) approved the Pfizer/BioNTech and Moderna vaccines in mid-December, 31.1 million doses have been distributed, though only 12.2 Americans have been inoculated, as of January 15. The initial stated goal was to vaccinate 25 million essential healthcare workers and  3 million long-term care residents by the end of December, yet the inability to meet the goal is partly due to a lack of staffing.

As Salon previously reported, hospitals have already been under a significant amount of pressure as coronavirus cases surge across the country. Asking them to orchestrate the task of vaccinating all of the staff — while also taking care of patients during a coronavirus surge with dwindling staff and resources — is no easy feat.

Amesh Adalja, a senior scholar at Johns Hopkins Center for Health Security, told Salon in an interview that it is tough for healthcare workers to do mass vaccinations and go about their daily jobs at the same time. Non-clinical volunteers, he said, could ease that burden.

“We need as many people helping to run these vaccination clinics,” Adalja said, adding that dentists and veterinarians can volunteer on the clinical side, while non-medical workers can help register people, enforce social distancing, and “make sure that everything moves smoothly.”

“It helps to alleviate the burden of running these sites from places that are under-resourced to do so and have to pull people from other functions,” Adalja said.

Certainly the pandemic has called for people from many vocations to assist with the pandemic.

Suzanne Smith was a registered nurse for 33 years, but left in 2019 to take a job as a solutions advisor at a healthcare tech provider called Global Healthcare Exchange. But this month, she took a volunteer position in Alaska’s North Slope to help vaccinate the region’s indigenous population. The North Slope of Alaska is a remote area, with only two public health nurses to serve 9,000 residents. Smith’s employer approved a leave of absence for her given the gravity of the pandemic. Having previously worked in the region for a year, Smith was prompted to volunteer when she received a call asking if she could return.

“Going back for me is a blessing and a gift,” Smith said. “I didn’t think it would ever happen and I leave tomorrow morning —  I don’t even think I’ll sleep tonight.”

Daniel Aldrich, professor and director of the Security and Resilience Studies Program at Northeastern University, began studying resilience in disasters after his home was destroyed by Hurricane Katrina in 2005. Since then, he’s conducted a lot of research on how communities bounce back from a crisis—like the Great East Japan Earthquake.

“There was a certain burden, psychologically, that we encountered,” while interviewing survivors, Aldrich explained. “People began to feel that they weren’t doing enough, they were feeling grateful but had no activities for it.”

Volunteering, Aldrich said, was an effective way to combat that sense of helplessness.  Considering how socially isolating the coronavirus pandemic has been, Aldrich said volunteering at vaccination clinics could both be psychologically beneficial for volunteers while simultaneously being helpful to the community at large.

“Getting involved and helping other people is a tremendous positive mental assistance to them,” Aldrich said. “One of the challenges that people have right now is that the pandemic has shut down many avenues for normal volunteer work, which means it’s less common we see people helping society out.”

Aldrich added that vaccine clinic volunteers will expand the network of clinics and assist overworked healthcare workers — and perhaps help combat misinformation about the vaccine.

“The more individuals you have spreading a positive word, saying ‘I saw 100 vaccinations and everything went really well,’ we want that kind of stuff getting out as a way of countering disinformation on vaccines,” Aldrich said.

Incentivizing volunteers with an expedited inoculation is a great way to eliminate the burden of people feeling like they’re “giving up” an income, or some kind of currency, to volunteer.

Indeed, some people have already received the ultimate reward for their vaccine-clinic volunteer work.

Andrew Cunningham, 36, owns his own pest control business called Daily Pest in Chicago. Both Cunningham and his spouse have been volunteering at the Malcom X College vaccination site.

“She sought the opportunity out for us, seeing as it would be an excellent way for us to give back to the community since the pandemic hit,” Cunningham said in an email. “We lucked out though, and were able to get our [vaccines] after we closed one evening.”

“The View” receives Hillary and Chelsea Clinton with uncharacteristic bipartisanship

Donald Trump is bored: He wants to move on from this pandemic — just as it hits swing states

The Queen Mother of Kansaworodo in the Essikado Constituency of the Western Region, Nana Akua Mansa II has commended President

Bawumia Is A Role Model To Zongo Youth — Binduri Imam