…..I don’t know how to leave without him

The wife of late former Lagos military administrator Mrs Gladys Ndubuisi Kanu yesterday blamed the death of her husband on deceit by the Nigerian hospital that the NADECO Chieftain was responding to treatment.

Fielding questions from newsmen in her Lagos resident, Mrs. Kanu said: “My husband is one in a billion. He was highly principled, very honest and always out to help people. Since I met him, he had never been sick this the first time.

“Within 11days, I took him to three different hospitals. I was about to fly him out for treatment but the hospital where he was deceived us that he was recovering. We intend using Air-ambulance to fly him out. His death came as a shock. It’s has not done that he has passed on.

“With all the governors that emerged in Lagos, my husband was very close to them contributing on State matters advising them. From the days of Bola Tinubu to this current administration. He was a very intelligent man, I don’t know how I am going to leave without him”.

“My father, beautiful inside and out. A few months ago, he sent message about a tree in our Lagos compound. Someone had asked why he hadn’t cut it down; it was dead, leafless. My father disagreed, saying ‘No, it is preparing to… bloom! Bloom to the glory of our awesome God.’ A few weeks later, it did.

“Right now, I take comfort in the fact that my father is blooming with our God, resting in perfect peace”.

According to Pa Opadokun: “In his 78 years sojourn on this terrestrial divide, Admiral Kanu has been Military Governor of Lagos and the old Imo State respectively. He was once a member of the Supreme Military Council (SMC) apart from his holding several command postings in the Nigerian Navy.

Admiral Kanu was a distinguished leader of the Council for Unity and Understanding (CUU) which was the most formidable platform created by the credible leaders of the entire former Eastern, Western, and Middle Belt Zones. The CUU was the main pillar which supplied the largest credible core of officers at the formation of the National Democratic Coalition, NADECO in 1994.

“At the inception of NADECO which was a nationwide national platform created by eminent nationalists, retired public officers, civil society organizations, Professional bodies, Students, Women, Traditional and Religious Leaders for a credible campaign for the restoration of democracy to Nigeria and to ensure that Nigeria convoked a Sovereign National Conference to resolve the National Question once and for all for the progress, development, stability and peace of Nigeria and finally for the deannulment of the credible victory of Chief MKO Abiola at the Presidential Election of June 12, 1993 which was insensitively and contemptuously annulled by the military jackboot led by Gen. Ibrahim Babangida.

“Admiral Kanu as NADECO’s founding Chairman of the All General Purposes Committee worked assiduously, sacrificed his mental, material resources, and applied his wide national connections for the establishment of a formidable, resilient, productive apolitical platform with proven positive results that eventually forced the Nigeria Army strongmen and their surrogates to return to the barracks with the death of the most violent Nigeria military despot, General Sani Abacha.

“Admiral Kanu became the Chairman of NADECO at the demise of Senator Abraham Aderibigbe Adesanya. Admiral Kanu’s contributions towards building a country that will be governed by policy thrusts centered on justice, equity, fairness, respect for as well as defense and protection of the rule of law will remain imperishable in the annals of our country’s history.

“Admiral Kanu, in spite of his towering figure in the military and political offices endured with equanimity the orchestrated humiliation and total disrespect for his person because he was a NADECO Chieftain. For example, Abacha security operatives violated Admiral Kanu’s privacy in several respects.

The security apparatus conducted oppressive search in Kanu’s Lagos home and he was escorted to Ovim, his home town like a felon for another cocktail of depressive search, just in order to implicate him and rope him into another fathom coup plot.

“Admiral Kanu remained unbowed in spite of the crude manner that he was hounded so much that while others of his pedigree surrendered, joined in unholy alliance with the military despot and distanced themselves from NADECO, Kanu was steadfast in speaking truth to power until his sudden transformation to immortality.

“Admiral Kanu would ever remain a public officer with human conscience, who did his possible best to ensure that the Nigerian State change course in order for us to build a just, equitable, politically stable and prosperous nation but the power brokers remain resistant to the most compelling and necessary change i.e. Restoring Nigeria to Federal Constitution to save Nigeria. Rather, they always imagine and compose conspiracy theory around any criticism of their misrule is designed to remove them from office.

“NADECO is proud to state without any reservation that Admiral Kanu’s career in the military was not exploited as most others do to satisfy their personal aggrandizement, crude accumulation of stolen public fund. Let it be known that Admiral Kanu as a former Governor of Lagos State owned just one building till his death.

“We commiserate with her Excellency, Mrs. Gladys Kanu, his wife, his children, the Lagos state and Imo state Governments and with the entire membership of NADECO for the loss of a very difficult to replace National Chairman who has left his positive footsteps on the footprints of time.

“As NADECO, we remain committed to the pursuit of ensuring that Nigeria returns to Federal Constitutional Governance upon which Nigeria secured her independence in 1960. Nigeria’s growth has been arrested and stunted since the military staged an insurrection against Alhaji Tafawa Balewa’s government on January 15, 1966. Since then the military through a cocktail of manufactured decrees have suspended and abrogated our NEGOTIATED FEDERAL CONSTITUTION and substituted for it with their decrees which UNITARISED and CENTRALISED governance till date, so much that after 6o years of Independent Nigeria is still a country and not a nation and by the latest global analysis remains and under-developing country whose record in Human Development Index puts Nigeria among the war ravaged parts of the world like Afghanistan, Pakistan, Somali, Congo etc.

“The consequence of the centralization and unitarisation of the Nigerian state has occasioned gross injustice, unfair play, inequity, contempt and unbelievable disregard for human rights of Nigerian people. The highly insensitive level of NEPOTISM and INSECURITY and BANDITRY that remain untamed through acts of commission and or omission that have become the hall mark of the current government suggests that the Nigerian state has contempt for the gross majority of Nigerians who have been sidelined as onlookers while the pretending “OWNERS” are running the state aground.

“NADECO reminds the current power brokers that Nigeria as a heterogeneous country cannot remain any longer under the consistently suffocating enforced cohabitation. The Nigerian State is advised to quickly invite the Ethnic Nationalities and their Leaders which were the building blocks upon which Nigeria was structured to a productive dialogue session to discuss and resolve the NATIONAL QUESTION.

“Adieu our indefatigable Gentleman Soldier and National Chairman, Goodbye, our beloved compatriot with notable public consciousness who remained selfless until death snatched him away from us. WHERE and WHEN shall Nigeria produce another Godwin Ndubuisi Kanu (Rtd)? May your soul continue to rest in peace and torment Nigerian oppressors of all kinds. And may your transition to eternal glory spur us to activate our collective determination to work legally and legitimately for Restoring Nigeria to Federal Constitutional Governance.” 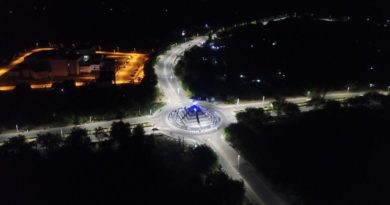 When billionaire Femi Otedola in a telephone interview, was asked by the radio presenter, "Sir what can you remember made you a happiest man in life?"

Femi said:
"I have gone through four stages of happiness in life and finally I understood the meaning of true happiness."

The first stage was to accumulate wealth and means. But at this stage I did not get the happiness I wanted.

Then came the second stage of collecting valuables and items. But I realized that the effect of this thing is also temporary and the lustre of valuable things does not last long.

Then came the third stage of getting big projects. That was when I was holding 95% of diesel supply in Nigeria and Africa. I was also the largest vessel owner in Africa and Asia. But even here I did not get the happiness I had imagined.

The fourth stage was the time a friend of mine asked me to buy wheelchair for some disabled children. Just about 200 kids.

At the friend's request, I immediately bought the wheelchairs.

But the friend insisted that I go with him and hand over the wheelchairs to the children. I got ready and went with him.

There I gave these wheel chairs to these children with my own hands. I saw the strange glow of happiness on the faces of these children. I saw them all sitting on the wheelchairs, moving around and having fun.

It was as if they had arrived at a picnic spot where they are sharing a jackpot wining.

I felt REAL joy inside me. When I decided to leave one of the kids grabbed my legs. I tried to free my legs gently but the child stared at my face and held my legs tightly.

I bent down and asked the child: Do you need something else?

The answer this child gave me not only made me happy but also changed my attitude to life completely. This child said:
"I want to remember your face so that when I meet you in heaven, I will be able to recognize you and thank you once again"

What would you be remembered for after you leave that office or place?

Will anyone desire to see your face again where it all matters?

This got me thinking. I pray it does same to everyone.