The late Mahatma Gandhi, and Indian leader said, “The best way to find yourself is to lose yourself to the service of others.” This statement best describe the nature of my late father, Pa Alfred Monday Abora Ilenbilua Ilenre, popularly known by friends and associates as Comrade Pino.

He was of Ishan extraction, born on 28th January, 1940 to the family of Pa Ilenre Akhimien in  Idumeke quarters in Iruekpen, Ekpoma in Esan West Local Government Area of Edo State.

He was a product of Ishan Grammar School, Uromi, Edo State and the Nigerian Institute of Journalism, Lagos. Until his death on 10th January, 2017, he was a veteran journalist, a social crusader, environmentalist writer per excellence, Secretary-General, Ethnic Minorities and Indigenous Rights Organization of Africa (EMIROAF), a Pan African organization dedicated to the protection of the rights and dignity of ethnic minority nationalities in Nigeria and by extension to the continent of Africa.

He was also the West African regional coordinator of International Alliance of Indigenous and Tribal Peoples of The Tropical Forest.

A veteran journalist of many years of experience and a prolific writer per excellence, worked with different print media (The Nigerian Tribune, The Nigerian Herald, Nigerian Observer, Midwest echo and Midwest champion) and was able to use the power of the pen to communicate his views and opinions without fear or favour on wide range of sensitive issues affecting the social economic and political events in Nigeria.

His involvement in human and minority right activism started in the 70’s alongside his good friend and journalist, also late by name Dan Ikunaiye and other contemporaries either still alive or dead, but was more pronounced in the 1990’s when he met his bosom friend and activist, late Ken Saro-Wiwa with whom he shared the same dream of a better Nigeria.

His relationship with Ken was so cordial that he was mistaken for an Ogoni man.  Ken Saro Wiwa was the founder of the Movement for the Survival of the Ogoni People (MOSOP), a movement he dedicated to the marginalized Ogoni people of Rivers State, in the Niger Delta region of Nigeria where the majority of the nation’s oil resources are harnessed.

In the course of fashioning out a way forward for Nigeria, they both realized that there was no concrete plans, policy and programmes that guaranteed the rights and dignity of ethnic minority nationalities in the country during the years of military incursion in governance.

In fact, they saw that the minority groups were becoming more marginalized by the day, hence the formation of the Ethnic Minorities and Indigenous  Rights Organization of Nigeria (EMIRON), Ken being the President and my father, Secretary General.

The organization was subsequently transformed into the Ethnic Minorities and Indigenous Rights Organisation of Africa (EMIROAF), in order to give it an international outlook and also internationalize the ethnic question,

Apart from his relationship with Ken Saro Wiwa, he associated himself with other progressives with great minds. He was a dedicated Awoist and used to describe Papa Awolowo as a visionary leader, a true federalist, a great politician and his dreams of building institutions and human capital.

He followed the footsteps of Papa Awolowo. He deeply respected, appreciated and believed in Awolowo’s dream of building an egalitarian Nigeria. He embraced his brand of politics under the platform of the defunct Unity Party of Nigeria (UPN), which centred on promoting Nigerian unity with regards to ethnic diversity.

He was not a politician, but what endeared him to the party, were the policy programmes & manifestos, which were in conformity with his believe of how Nigeria should be run and administered.

His involvement in the human right struggle for the recognition of ethnic minority rights and dignity of the oppressed and neglected people of Nigeria from economic and political slavery was a very bitter experience for him, especially during the period of Abacha’s tyrannically rule (1993 – 1998). A couple of times, he was molested and intimidated by Abacha’s security agents.

He never for once changed his stance when confronted with threats and intimidation from any Nigerian government.  In fact, he was never afraid of death. He was always focused on the struggle because he knew he was fighting a just cause and had the backing of other progressives and the international community. He was indeed a champion of genuine struggle for the emancipation of Nigerians from oppression and injustice through peaceful dialogue.

He was never known to be violent. He feared that if care is not taken to embrace peaceful dialogue, a bloody revolution may likely spring up in the country, which he vehemently prayed against  He was among the progressives alongside Dr. Beko Ransome Kuti (late), Asiwaju Bola Ahmed Tinubu, Alfred Rewane (late) and others, dead or alive,who fought for the restoration of the mandate given to MKO Abiola in the 1993 presidential election. He was among the people barred during the Abacha junta from travelling out of the country, because he was seen as a threat to Abacha’s government.

I remembered vividly an incident in 1994, he was barred from travelling overseas for a UN conference on ethnic minorities. That night, he left for the Murtala Muhammed Airport around 8:00p.m, only to see him back at around 1:45am in the midnight of course I was surprised to see him because I believed he was already in the air on his way to Europe.

He told me that Immigration officers at the Murtala Muhammed Airport seized his international passport and other vital documents, because he was listed amongst those not allowed to travel out of the country.  My dad, being a very intelligent man, calm, bold and calculated manoeuvred his way to Ghana on exile temporarily and subsequently came back and devised means of always jetting out of the country when the need arises to attend meetings and conferences on important ethnic minority issues.

In 1998 while he was in Ghana, he had a fatal accident which was life-threatening, resulting in a fracture in one of his lungs. It was excruciating pain for him and had to live with it for 19 years with frequent visits to a Chinese hospital in Ghana. No doubt, it was a contributory factor to his death, a sacrifice he had to pay for Nigeria.

On his 70th birthday, I congratulated him and he told me “Son, I have just boarded a bus of see0me-no-more and may alight any time at my destination” I  knew at that age, he was nearer to where he was going than where he was coming from, but never knew it will come so soon, seven years later.

I, his first son experienced Abacha’s tyrannical rule, when the junta’s security operatives were on the prowl for people suspected to be a threat to his government.  In 1996 as a 23 year-old-boy, I was arrested in Ikorodu, Lagos, and detained at the State Security Service (SSS) office, Shangisha for almost a month, not seeing the sun.

I was not physically tortured but mentally tortured and during the period of my confinement, they demanded to see my dad, who on getting to know that I was arrested and detained acted swiftly by going underground to ensure I was released. He was been monitored for his human and minority right activities.

He was one of the brains behind the formation of the Pro national conference organization (PRONACO), chaired by late Chief Anthony Enahoro. A group clamouring for a truly representative sovereign national conference, where the basis of the country’s corporate existence will be discussed.

As PRONACO’s Director of Mobilization, he played key role in the drafting of the peoples’ constitution under the platform of the organization, a constitution proposed to the Federal Government of Nigeria. The late nationalist, Chief Enahoro, who I met once in my life before he passed on, described him as a resourceful man, worthy of emulation.

Today, I remember my father for the legacy he left behind, his positive contributions and impact to the socio-economic and political issues in the country, his integrity, compassion and strength of character.

A devoted and faithful Christian before he died, he was a loving father and one of the most respected veteran journalist, human & minority rights activist in Nigeria history. 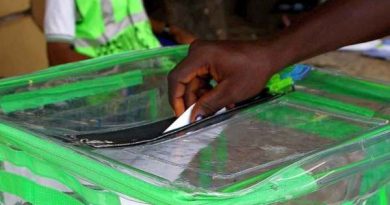 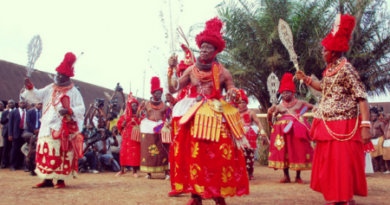 The umbrella body of Muslim organisations in Ghana, the Federation of Muslim Councils (FMC) joins other peaceloving voices in Ghana,