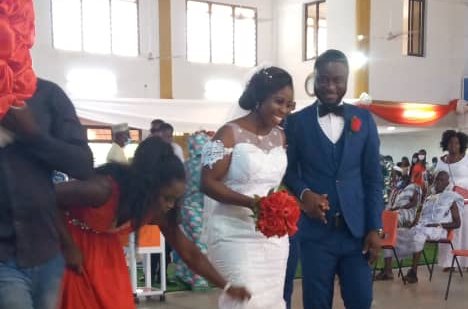 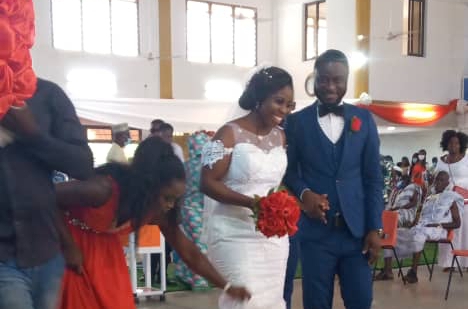 Shadrach Nana Nyarko who is arguably one of Central Regions finest sports presenters and one of GBC’s best football commentators finally ties the knot with his long time girlfriend Helena Quansah at the Liberation Family Chapel in Cape Coast.

Saturday the 26th of December, 2020 at the Liberation Family Chapel, the solemnization of holy matrimony between my friend and junior colleague Shadrach Nana Nyarko and Helena Quansah was held.

During the solemnization of holy matrimony, Reverend Prof. Joseph Ampiah Ghartey, the immediate past Vice Chancellor of the University of Cape Coast and also a minister of the Gospel was the officiating minister who took the couple through the exchange of vows and rings.

Then, Rev. Francis Kwame Arhin gave the sermon by admonishing the newly wedded couple to treat each other with respect and cordiality and that is the only way they can enjoy success in their marriage.

Thursday, the 24th of December, as most Ghanaians were feverishly shopping for the Christmas festivities, Mr. Nyarko was also busily going through the traditional marriage formalities at the family home of his girlfriend Helena Quansah at Adisadel Estate in Cape Coast.

Once the traditional arrangements were concluded and accepted by the family of the Quansah’s, Saturday the 26th of December’s wedding was just a matter of course and a top up to the processes that ended on Thursday.

The family of Shadrach was heavily represented and led by Obusuapanyin Ofori, Nana Kweku Ennu III, Charlotte Adu (Maame Manna), Pastor Alex Nyarko and other members who came from far and near to assist their kit and kin to complete his marriage proceedings.

Other sports presenters from sister stations were in attendance too. Notable among them were Asante Fokuo, Head of Sports at ATL FM, Addai Munumkum Ansah Frederick of Ahomka FM and Ocean 1 Television, Sir Obanji of Darling FM, etc came to support their colleague.

It was a colourful celebration of love at the Liberation Family Chapel where Radio Central’s sports presenter married his fiance Helena.

I can only wish them a merry Christmas, a prosperous New Year and all the best in their new life as a couple. 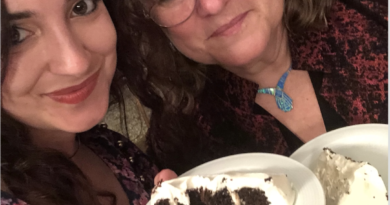 Ask Your Mom to Be Your Wedding Date. You’ll Have Way More Fun.

The 9 Best Sleep Apps For Your Most Restful Night Ever

Getty Images You need sleep. (Yeah, you already know that.) What isn’t always intuitive is how to get it. Between

Nana Agradaa burns her shrine to show her seriousness