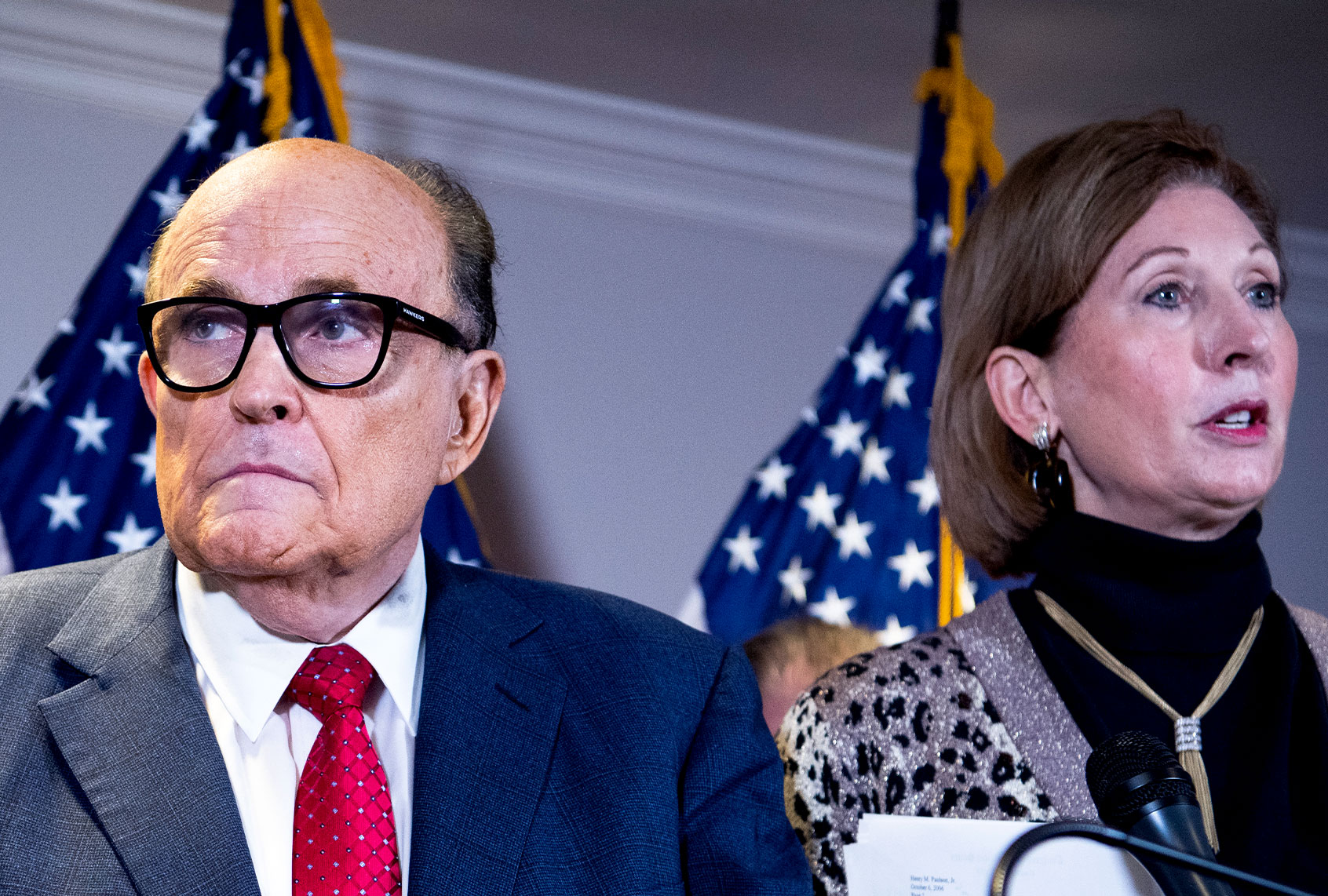 A top employee at Dominion Voting Systems, the voting machine company at the heart of Trumpworld’s baseless allegation that votes were flipped to President-elect Joe Biden, filed a lawsuit against the Trump campaign and conservative media outlets for defamation.

Eric Coomer, the director of product strategy and security at the Denver-based firm, accused Trump allies of pushing conspiracy theories about him and his company of intentional infliction of emotional distress and civil conspiracy in a Denver court. The lawsuit names Trump’s campaign, attorneys Rudy Giuliani and Sidney Powell, pro-Trump news outlets Newsmax and One America News Network, and multiple other conservative outlets and commentators.

Giuliani during a news conference called Coomer “a vicious, vicious man. He wrote horrible things about the president … He is completely warped,” the lawsuit noted.

“Today I have filed a lawsuit in Colorado in an effort to unwind as much of the damage as possible done to me, my family, my life, and my livelihood as a result of the numerous false public statements that I was somehow responsible for ‘rigging’ the 2020 presidential election,” Coomer said in a statement.

The lawsuit says that the unfounded conspiracy theories about Coomer have resulted in death threats, repeated harassment, and “untold damage to his reputation as a national expert on voting systems.” Coomer fled his home a week after the election and is staying at an undisclosed location, the suit said.

“The widespread dissemination of false conspiracy theories about the 2020 presidential election has had devastating consequences both for me personally and for many of the thousands of American election workers and officials, both Republican and Democratic, who put aside their political beliefs to run free, fair, and transparent elections. Elections are not about politics; they are about accurately tabulating legally cast votes,” Coomer said.

Coomer told Colorado Public Radio that the conspiracy theories about him began when conservative activist Joe Oltmann, one of the people named in the suit, spread an allegation on his podcast that Coomer told “antifa” members that he “made effing sure” Trump would not win the election. Coomer said the conversation never took place and that he has no links to any political group.

The suit also names OAN reporter Chanel Rion, who reported the allegations; conservative bloggers Jim Hoft and Michelle Malkin, who interviewed Oltmann about his allegation; and conservative commentator Eric Metaxas, among others.

Fox News was not named in the lawsuit, and the complaint actually cited Fox News’ Tucker Carlson’s rejection of Powell’s evidence-free claim about vote-switching to back its argument.

Coomer said his, his family’s, and his friends’ home addresses have been posted online and some have received threatening messages.

“It’s terrifying,” he told NBC News. “I’ve worked in international elections in all sorts of post-conflict countries where election violence is real and people are getting killed over it. And I feel that we’re on the verge of that.”

Dominion, which provides election equipment and software in 28 states, is not part of the lawsuit. But the company has also threatened legal action against Powell and the Trump campaign if they do not retract their false claims about the company.

Powell, who Trump reportedly considered appointing as a special counsel to investigate baseless allegations of widespread voter fraud, has pushed a bizarre conspiracy theory that Dominion, as part of a plot hatched by long-dead Venezuelan leader Hugo Chavez and bankrolled by countries like China and Cuba, sent votes to be tabulated overseas and switched votes from Trump to Biden. She has provided no evidence of her claim, her expert witnesses were discredited, and she has lost every lawsuit seeking to overturn election results. She was ousted from Trump’s legal team after alleging that Republican Georgia Gov. Brian Kemp was paid off to stay quiet about the fictitious scheme.

“Your reckless disinformation campaign is predicated on lies that have endangered Dominion’s business and the lives of its employees,” Dominion said in a letter to Powell. “…Your outlandish accusations are demonstrably false. While soliciting people to send you ‘millions of dollars’ and holding yourself out as a beacon of truth, you have purposely avoided naming Dominion as a defendant in your sham litigation — effectively denying Dominion the opportunity to disprove your false accusations in court.”

Giuliani has tried to distance Trump from Powell but she has shown up at the White House for numerous meetings in the past week. Giuliani himself has pushed the vote-switching conspiracy without evidence and even falsely alleged that Dominion was a “front” for another voting software firm called Smartmatic. The two companies have no ties and Smartmatic’s software was only used in Los Angeles County in the election.

The company issued an extensive lawsuit threat to Fox News, Newsmax, and OAN for airing the baseless allegations, arguing that the networks “engaged in a concerted disinformation campaign.” The threat prompted Fox News to air segments debunking the false claims made by its hosts and guests about Smartmatic and multiple Newsmax hosts were forced to give on-air clarifications about the fraudulent claims.

The Trump campaign has apparently expected to face legal trouble over Powell’s conspiracy theory. Trump’s campaign legal team sent a memo to dozen of staffers obtained by CNN that warned them to preserve all documents related to Dominion and Powell. A law firm representing Dominion later sent a letter to Giuliani and White House counsel Pat Cipollone instructing them to preserve all records related to the company, warning that legal action was “imminent,” according to the network.

The letter demanded that Giuliani stop making “defamatory claims against Dominion” and ensure there is “no confusion about your obligation to preserve and retain all documents relating to Dominion and your smear campaign against the company.”

GOP Sen. Marsha Blackburn reveals she doesn’t know what an “Amendment” is — on Constitution Day

Why Dangote refinery will not reduce price of petrol – Ministers

Listen to article Secondary schools in Nigeria are due to reopen on August 4, to enable the students to write