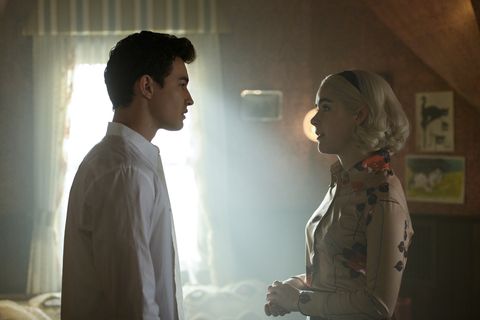 Spoilers for Chilling Adventures of Sabrina season 3, ahead.

December 31 will be a beautiful day—both because 2020 will is coming to a close, and the newest season of Chilling Adventure of Sabrina will be released. The goth re-imagining of Sabrina the Teenage Witch, starring Kiernan Shipka as our titular spellcaster, is ending with this fourth installment; the third season depicted Sabrina’s divide between being an average teenager and Queen of Hell, while balancing two possible love interests.

That duality is something showrunner Roberto Aguirre-Sacasa (Riverdale, Pretty Little Liars: Original Sin) says will be unpacked in the final installment. “I think part of season 4 is Sabrina realizing that even the smallest of actions could have huge, universe-destroying consequences,” he told Entertainment Weekly. “It’s something that will affect every character and it’s a little bit like that Gwyneth Paltrow movie Sliding Doors. You can see the two different paths before her.”

Ahead, what to expect in Chilling Adventures of Sabrina‘s final season, how that time-traveling season 3 finale will impact it, and a look at the first trailer.

The show’s fourth season will also be its last.

Netflix confirmed in July that Chilling Adventures of Sabrina‘s fourth season would also be its last. “Working on Chilling Adventures of Sabrina has been an incredible honor from day one. The cast, beginning with Kiernan as everyone’s favorite teen witch, has been an absolute joy. I am beyond thankful to the crew, writers, editors, assistants and everyone for pouring so much love into this dark dream of a show. I’m also grateful to our partners at Netflix, Warner Bros., Berlanti Television and Archie Comics for letting us tell the story we wanted to tell, the way we wanted to tell it. We can’t wait for everyone to see part four,” Aguirre-Sacasa said in a statement, per The Hollywood Reporter.

A description of the fourth and final season, via Netflix, reads:

Chilling Adventures of Sabrina re-imagines the origin and adventures of Sabrina the Teenage Witch as a dark coming-of-age story that traffics in horror, the occult and, of course, witchcraft. Over the course of Part 4’s eight episodes, The Eldritch Terrors will descend upon Greendale. The coven must fight each terrifying threat one-by-one (The Weird, The Returned, The Darkness to name a few), all leading up to…The Void, which is the End of All Things. As the witches wage war, with the help of The Fright Club, Nick begins to slowly earn his way back into Sabrina’s heart, but will it be too late?

Gavin Leatherwood as Nick and Kiernan Shipka as Sabrina in Chilling Adventures of Sabrina.

Eight new hour-long episodes of Sabrina will arrive just in time for the new year on December 31, 2020. A date announcement for the new installment shows Sabrina balancing her duties in Greendale and the underworld. Case in point: One shot reveals that her sweet 16th birthday and dark baptism are penciled in on the same day. Voiceover from Ambrose teases that danger is on the horizon. “We’ve never faced such a peril as this. There is another war coming,” he says.

These last eight episodes will have a lot to wrap up. In the first trailer alone, viewers are introduced to the evil, ancient force known as the Eldritch Terrors: a life-threatening collective that includes The Darkness, The Void, and other elements of destruction. In addition to juggling two identities and stopping the world from destruction, Sabrina has a few other things on her mind. Nick (Gavin Leatherwood) is referring to their relationship as “endgame,” while Aunt Hilda (Lucy Davis) is continuing her romance with Dr. Cerberus (Alessandro Juliani).

Thanks to a time paradox, most of the cast is returning.

One character unlikely to return is Prince Caliban, played by Sam Corlett, after he was transformed into stone and relegated to the ninth circle of Hell. However, the season 4 trailer teases a possible escape for the maniacal ruler.

The season 3 finale changed everything for Sabrina.

Throughout the show’s third season, Sabrina struggled between her life as a typical cheerleader at Baxter High and a demonic witch in the underworld. That conflict reaches a boiling point in the finale, after she creates a time paradox in order to save her coven and Greendale at large from evil forces. Sabrina duplicates herself so that she can rule as Queen of Hell and live out her normal life all at the same time. But that decision won’t come without a price, Ambrose warns her at the end of season 3. The fourth season will explore the ramifications of her time-traveling and how her position in both worlds is now threatened.

Chilling Adventures of Sabrina won’t get a fifth installment, which is especially disappointing considering what Aguirre-Sacasa teased about it on Twitter. After news broke that the series had been cancelled, he tweeted, “Thank you for all the love, #sabrinanetflix fans. Part Four is our best yet and Part Five, ‘Witch War,’ would’ve been AMAZING. To be continued in the pages of #CAOS comic book…,” alongside an illustration that read ‘The Witches of Riverdale Are Coming.’ In the drawing, the cast of Sabrina can be seen teaming up against the Riverdale crew.

Chilling Adventures of Sabrina season 4 will debut on Netflix on December 31.

Watch The Chilling Adventures of Sabrina 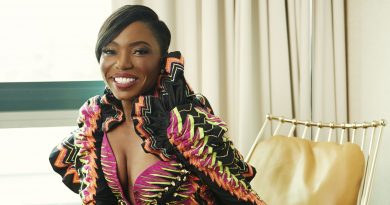 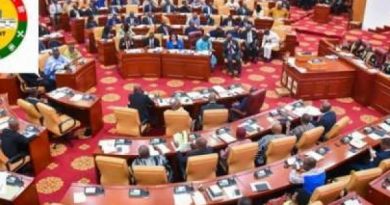 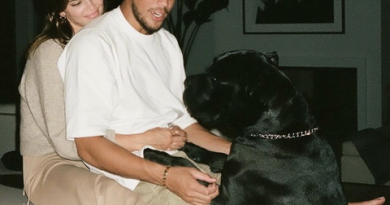 How Kendall Jenner and Devin Booker Feel About Getting Engaged, One Year into Dating