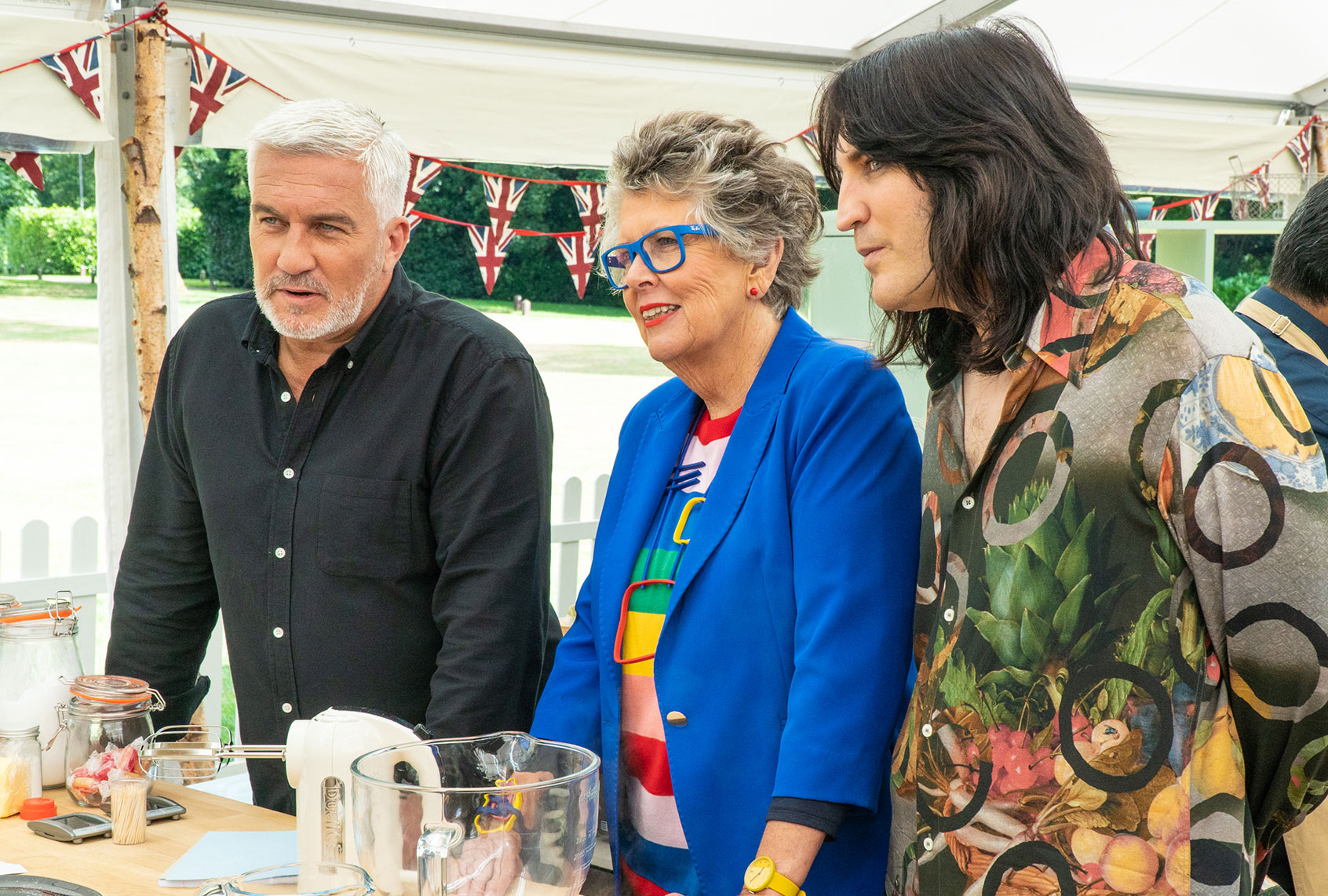 Baking is tricky business that demands precision. You can have all the best ingredients, bring them to the right temperature, measure out the proportions just so, follow the prescribed bake time and the end product can nevertheless be an epic fail. As for why that is, there could be many reasons.

The oven thermometer could be off. Your appliance may heat unevenly. The room temperature could be too hot or too cold, the air too humid or too dry. Or maybe the problem is you, the baker. You over-kneaded. You under-flavored. You did not have the appropriate amount of love in your heart while making the dough.

Many of the hobby’s challenges bear similarities to those bedeviling television itself, which is why the general opinion that “The Great British Baking Show” failed in its latest season is understandable. We still gorged on it, mind you – nobody likes waste, and who’s counting calories these days anyway? Besides the show’s posh grand dame of a judge Prue Leith, I mean.

Compared to the fullness past season’s instilled in us, however, these felt like empty calories even though the components are more or less the same, save for a couple of ingredient swaps.

And there are those who argue, with merit, that those changes botched the leavening. Some of us never knew how much we’d miss Noel Fields’ first co-host Sandi Toksvig until she stepped down and production replaced her with “Little Britain” star and acquired taste Matt Lucas. (It’s also tough for anyone to follow in the footsteps of O.G. hosts Sue Perkins and Mel Giedroyc; pour out an extra teaspoon of vanilla extract for them next time you stir up some batter.)

But one casting misfire doesn’t necessarily collapse the cake. No, for a number of reason akin to the culinary X-factors listed above, these latest episodes simply couldn’t hold the increased weight of our expectations.

Regardless of how we feel about the 11th season of “The Great British Baking Show” (or “GBBO” for short, an acronym for its U.K. title “Great British Bake Off”) the fact remains that it is still one of the loveliest, most beautiful and genteel series on television. The fact that it is one of the few competitive reality shows where the contestants help each other instead of back-stabbing, compliment each other’s work, applaud each other’s successes and commiserate with those who stumble or are sent home, usually makes it the antidote to our anxiety.

And that’s strange to contemplate, given that the thrill of “GBBO” comes from the audience connecting to the heightened agita contestants experience as they struggle under impossible time constraints. In a pandemic defined by widespread disquietude and legions of first-time bakers soothing their angst by muddling through banana bread recipes, the show should be, and has been, both balm and inspiration. It is unapologetically positive and optimistic without being cloying.

That Season 11’s dozen contestants lived in a pandemic bubble themselves during filming should also lend another level of relatability and audience appreciation. These home bakers didn’t only sacrifice their time to compete on “GBBO,” some of them also committed to spending weeks apart from their families – all in the name of bringing us new TV at a time of boob tube scarcity. We should be hailing them as heroes.

And yet, by the finale episode, it seemed as if half the audience was angry at bread specialist and “Bake Show” dom Paul Hollywood for eliminating two-time Star Baker Hermine, a patisserie specialist, guaranteeing a place in the finale for Laura Adlington, a very charming woman defined by both her inconsistent performance throughout the season and her propensity for stumbling and dropping things.

Laura was joined in the finale contest by Dave Friday, who was competent and solid although far less remarkable than the season’s Boy Wonder Peter Sawkins who, at 20 years old, has been baking along with this series for half of the time that he’s been alive.

Without spoiling anything, let’s just say that the member of that trio you’d most expect to win won. Which is as it should be. In the viewpoint of untold numbers of “Great British Baking Show” fans, however, Hermine’s elimination was unjust, and in response – nay, retaliation – legions of angry trolls heaped abuse on Laura on Twitter.

There’s no excuse for that behavior. There’s an explanation, sure. Maybe a few.

Start with the fact that millions of who are watching have run out of patience with fellow humans. Add the heightened awareness of unfairness in society right now – to women, to Black people, the kind that elites visit on the working class – and it could be that Hermine’s elimination became a symbol of all that’s wrong with the world.

Looking at her track record, she was more consistent than Laura throughout the season, had been one of the judge’s favorites four times, earning Star Baker in two of those instances. She was the only contestant this cycle to do so, by the way. Laura was in the danger zone several times and riding the middle in most challenges.

Her saving grace in the patisserie semifinal was flavor; her dessert presentation looked like a dog’s breakfast but, according to Hollywood, tasted wonderful. Hermine’s “stodgy” cubes looked slightly better than Adlington’s and tasted worse. Peter excelled, and Dave daved it, meaning he did better than worst but not good enough for the top.

In Paul’s point of view, style without substance is a sin, so sending Hermine is on brand even if we don’t feel it is fair.

And this brings us to another culture-wide irritation boiling over of late, a general sense of being fed up with mediocrity being reward. Both the United States and Britain are currently being run by mediocre, unqualified men and women who failed upward despite their lack of qualifications. Some have opined that the mediocrity among the general pool of contestants this season was higher than usual. I don’t think that I necessarily agree with that, but in this particular season finale, three bakers faced off, and two of them are exemplars of mediocrity, although with lovely personalities.

To think about it, every final has had a mediocre person in it. Sometimes those folks surprise us. But that’s the thing about mediocrity – it actually receives more chances to surprise and succeed, whereas people who have been more frequently reliable and exhibit regular excellence may be knocked out after one or two screwups.

This very sentiment is the reason a year-old tweet featuring Hasan Minhaj kindly but honestly rating himself as more good-looking than Dax Shepard went viral. The clip originates from a Vanity Fair interview dated to December 2019 in which the interview asks Minhaj, who was hooked up to a lie detector, to rate Shepard on a scale of 1 to 10. Shepard had previously rated Minhaj a 9. Which is nice!

After much cajoling, a flustered Minhaj responds by assigning Shepard a hotness score of 6.5 or a 7. Or a 6.57. Either way, it was not a 9.

When the interviewer accuses Minhaj of being harsh, he replies with honest, faultless reasoning. “Dax is part of a thing where, in show business, there’s this whole movement of approachable white dudes whereas with, like, men of color, it’s like Idris Elba, Henry Golding, Zayn Malik, or you work in IT. There’s no middle.”

White performers who came up with him, he said, could be schlubby and make it in show business. But there’s little to no equivalent of that phenomenon with people of color. “You’ve gotta have, like, the V-taper in your abs if you’re gonna be Asian,” he said.

For the kicker the interview asks Minhaj he thinks he’s better looking than Shepard. “Yes,” Minhaj replies, “but I will not get the same opportunities that Dax does.”

And this explains the anger over the Hermine elimination. She was more good than bad, often great, and superior more times than most. Her fatal flaw was that she stumbled at the wrong time and the adorable stumblebum failed with slightly more flair.

Hermine may even have bested the ultimate winner who, if “Baking Show” history holds, will receive endorsement opportunities and book deals and maybe even a show. In a better version of this season we might not have minded her loss if it meant more skillful and luckier bakers in the final.

But we did not get that season, which meant “The Great British Baking Show” reminded us that we are not living in such a year. Instead of helping us to entirely forget the woes pricking at us for a time, it ended up throwing them into sharp relief.

The good news is that a shot at redemption or, barring that, consolation, may soon arrive with the Dec. 4 arrival of “The Great British Baking Show: Holidays,” Season 3.

All episodes of the latest season of “The Great British Baking Show” are currently streaming on Netflix.

“There’s something wrong”: Pelosi thinks Trump was “medicated” during State of the Union address

Rip Larry such a great man

Oh Larry King May his soul rest in perfect peace