Abductors of the leader of the market women, the lyaloja of Isua, Akoko South East council area of Ondo state, Chief Hellen Edward have reduced the N11m ransom earlier demanded to N 5 million.

The lyaloja was the leader of the delegation of market women to their monthly meeting in Akure, the state capital when 16 traders and others were abducted over the weekend along the Akure-Owo highway.

Ten of the traders were according to the state police command rescued while four of the kidnappers were arrested.

However, the family of the lyaloja, said she was yet to be rescued by the police and that she was still in captivity.

One of her children, Mrs Alaba told newsmen that her mother spoke to members of the family and urged them to look for the ransom demanded for by her captors to hasten her release.

Alaba said that her mother was not one of the ten persons the police said were rescued from the kidnappers over the weekend.

She confirmed that the abductors have agreed to reduce the ransom from N11m to N5m but that the family could still not raise such huge amount of money.

According to her ” the N5m demanded by the kidnappers was even too much for our family to pay.

Vanguard was informed that one out of the six still in the kidnappers den had managed to escape.

Recall that the driver of the vehicle said ten gunmen abducted the market leader and others along the Ogbese Uso axis of Akure owo highway.

The driver who is of the council secretariat identified as Jimi said that he was set free so as to be able to inform the family of the victims.

He added that the gun wielding kidnappers also abducted some other motorists along the same highway unhindered that same weekend.

The state police spokesperson, Tee-Leo Ikoro, said the policemen and other security agencies were combing the forest to secure release of the victims.

The Police Commissioner, Salami Bolaji, according to him has ordered all police Divisions in Akoko area to deploy maximum men to the forest as well as secure the highway in the area. 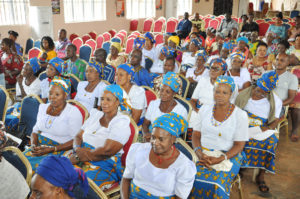 The Vice-Chancellor of the Cape Coast Technical University, Rev. Prof. Ing. Joshua Danso Owusu-Sekyere has hinted at the commencement of