There are indications that activities in the external sector of the economy is picking up as Net Foreign Exchange Inflow (NFEI) into the economy rose by 18 percent to $4.56 billion in the first two months of the second half 2020, H1’20.

This major economy indicator has been in decline as part of the adverse impact of Coronavirus (COVID-19) pandemic on the global economy earlier this year.

The latest development,  Financial Vanguard  findings show, represents a sharp contrast to the 64 percent decline in NFEI in the first half of the year, H1’20.

Data from the Central Bank of Nigeria (CBN) monthly economic reports show that in the H1’20 the decline bottomed out at $3.85 billion in June from $10.11 billion recorded in January.

In the reversal, Financial Vanguard findings show that in July NFEI rose 9.6 percent month-on-month to $4.22 billion from $3.85 billion in June. The trend continued with another 8.0 percent rise in August to $4.56 billion.

The positive trend in July was driven by slower pace in the decline of inflows combined with sharp decline in outflow of forex resources from the economy during the period.

Analysis showed that forex inflow into the economy dropped only marginally by 0.4 per cent to $6.68 billion in July. But forex outflow declined deeper by 14 percent to $2.46 billion, hence net inflow of $4.22 billion.

But in August, the positive NFEI was sustained even though both inflow and outflow rose significantly.

The      15 percent increase in forex outflow in August, as against decline of 14 percent in July, according to the CBN,    was due to increased demand for    foreign exchange sales generated by the resumption of economic activities following reopening of land and air boarders globally.

“On the other hand, foreign exchange outflows through the economy, driven, largely, by outflows through the CBN, rose by 15.0 per cent to $2.83 billion in the review period, over the level in the preceding month, but declined by 58.7 per cent below that in the corresponding period of 2019.

“The development, relative to the preceding month was attributed, mainly, to the increased tempo in economic activities as a result of the gradual opening of land and air borders globally.

“Aggregate foreign exchange inflow through the CBN stood at US$2.58 billion, an increase of 30.3 per cent above the level in the preceding month, but a decline of 25.5 per cent below the corresponding month of 2019.

“This was attributed, largely, to the 48.1 per cent and 4.7 per cent increase in the non-oil and oil receipts through the Bank to $1.73 billion and $0.08 billion, respectively, in the review period. The development was due to the increased demand for oil and the opening of international borders by most countries, which led to the gradual recovery of global economic activities. In the domestic economy, the partial relaxation of lockdown measures also impacted economic activities positively.

“Aggregate foreign exchange outflow through the CBN increased by 12.7 per cent to $2.67 billion, compared with $2.37 billion in the preceding month. The development was due to increased demand necessitated by the uptick in economic activities as a result of the reopening of factories and businesses.” 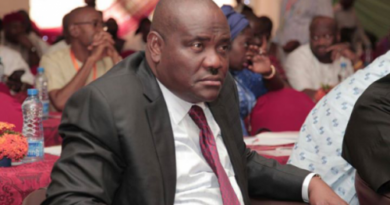 Mosque Demolition: Wike And Use Of Urine To Clean His FIlth By Najib Kaslam Kano

Tension in Aba over shooting around police station

Ghana will be spending at least $10 to get one person vaccinated against the coronavirus, according to estimates from the