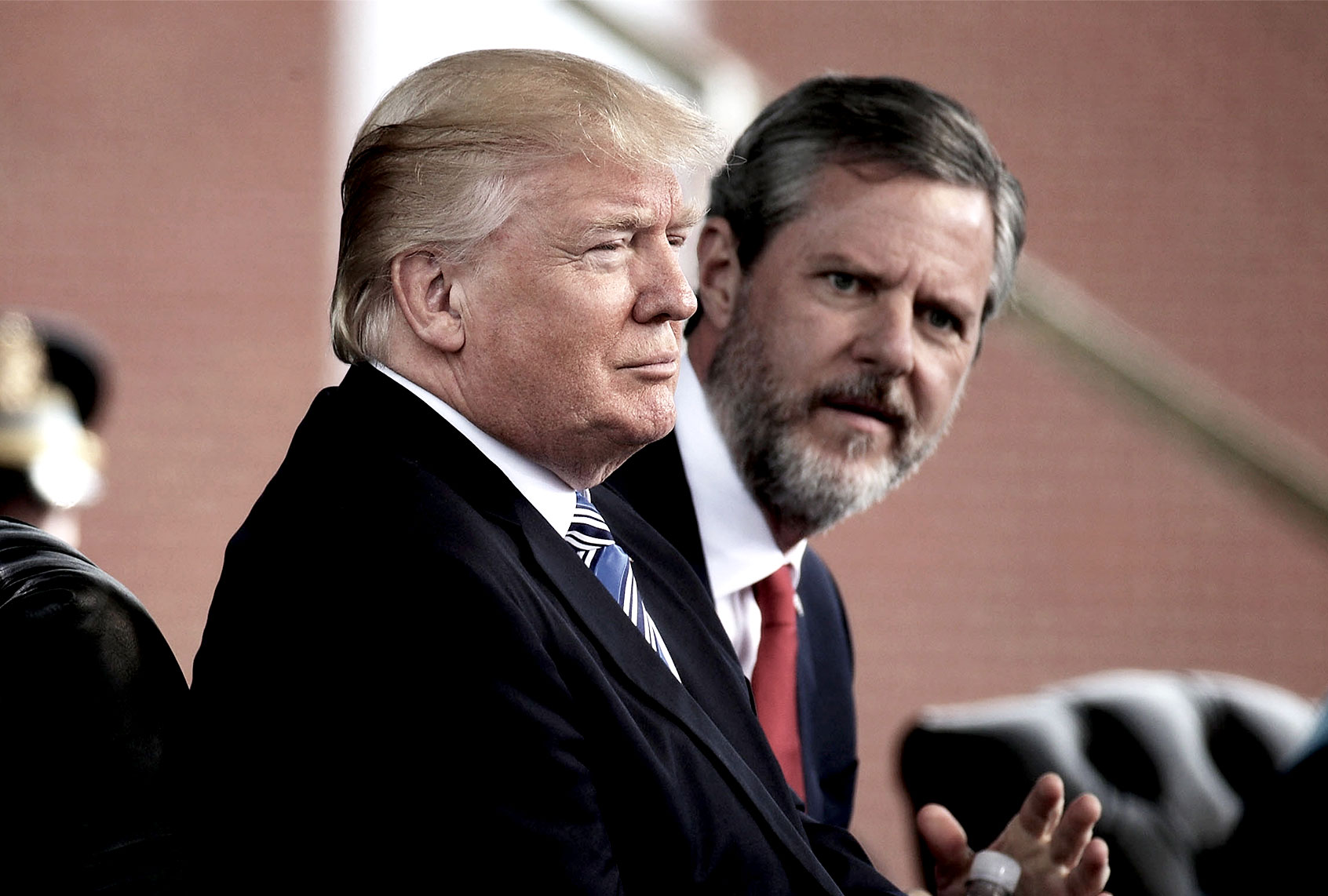 Late Thursday night, a video began circulating on Twitter of a small crowd of women in bright red MAGA hats kneeling outside the Clark County Election Department, rocking back and forth with arms lifted in furtive prayer. “We give our hearts to you in the name of Jesus,” one of them can be heard saying. The rest called out individual prayers that Donald Trump would narrow the gap between him and Democratic challenger Joe Biden in the state. In the end, their prayers were not answered.

The jokes wrote themselves. “Ma’am, please stop, we have separation of church and state here,” one Twitter user wrote, while another posted, “Me when I get to Chick-fil-A, but then realize it’s a Sunday.” It’s funny; in my sleep-deprived state, the speculation that God sent those women to voicemail made me laugh out loud. But as someone who was raised in the church, the image was also heartbreaking  (there’s no other word for it, really) in a way that is difficult to fully express.

How, after all that has transpired over the last four years — children kept in cages, the consistent dehumanization of marginalized communities, disparaging veterans and POWs, credible allegations of sexual assault, the blatant lies, the Stormy Daniels hush money — can someone who calls themselves a Christian support that man? It’s a question that I’ve been asked, and think about, a lot.

It’s a question that was also raised retrospectively after the scandal involving former Liberty University president Jerry Falwell Jr., his wife Becki and former pool attendant Giancarlo Granda came to light in August. As Politico reported at the time, Falwell Jr. both approved of and observed his wife’s sexual relationship with Granda, who was 20 years old at the time. These encounters took place multiple times between 2012 and 2018. “Becki and I developed an intimate relationship, and Jerry enjoyed watching from the corner of the room,” Granda said.

To understand the magnitude of the scandal, you first have to understand the power of the Falwell dynasty. Jerry Falwell Sr. started Liberty University on the back of his successful ministries, K-12 private school, Bible studies, and television and radio broadcasts that were syndicated across the country.

In the late 1970s — after the Supreme Court’s decision on Roe v. Wade was issued and the IRS proposed an ultimately doomed rule that would have stripped some private schools of their tax-exempt status — Falwell and a group of fellow evangelicals formed the Moral Majority, a prominent American political organization associated with the Christian right and Republican Party.

“The Moral Majority was both a fundraising behemoth and a rallying point for Christians to get involved in politics,” wrote reporters Maggie Severns, Brandon Ambrosino and Michael Stratford in a joint byline for Politico. “As the group’s most high-profile leader, Falwell Sr. travelled the country, staging rallies and parades and helping to register new voters at churches. In 1980, the group threw its support fully behind Republican Ronald Reagan against the evangelical Democratic President Jimmy Carter.”

They continued: “After Reagan won a surprisingly large victory, the Moral Majority took credit for mobilizing a new bloc of voters that helped him win Southern states that had four years earlier supported Carter, their fellow Southerner.”

The Moral Majority, as an organization, petered out in the late ’80s, but Falwell Jr. soon came along and became a prodigious fundraiser for his father’s university (and digging his father out of nearly $100 million in accumulated debt), before eventually taking over as president in 2007 following Falwell Sr.’s death.

But back to Falwell Jr.’s scandal this summer. That wasn’t his only indiscretion. News of his behavior began last year when, as Politico reported, former Trump attorney Michael Cohen helped “clean up racy ‘personal’ photographs” of his wife, Becki, including one of her in a French maid costume, which Falwell had allegedly sent to a number of employees at his evangelical university. He would allegedly brag about his penis size in the presence of university officials, and reportedly had an old ‘price of admission’ sign decorating the entrance of his home, which he would point to and tell guests, ‘Oh, that’s for blowjobs.”

Then there were the photos of Falwell that surfaced on Aug. 7, showing  him with his pants partially unzipped and his arm around a woman whom he later claimed was his wife’s assistant.

Most recently, as Politico reported on Nov. 1 — though it seems it was, understandably, eclipsed by election news and anxiety — the Falwells would play a kind of sexual “would you rather game,” in which they would point to male and female students and imagine what it would be like to have sex with them, according to a former student who said Becki told him about the game.

I’ve written before about how unlikely it was that leadership at Liberty University, which is one of the premier colleges for Evangelical students, were blind to Falwell Jr.’s behavior, especially since it so blatantly flew in the face of the college’s own student honor code, called “The Liberty Way,” Students are required to sign the code upon admission, which stipulates that premarital sex is forbidden, as are same-sex relationships. Drinking alcohol and “obscene language” are infractions, and students are instructed to “dress modestly at all times.”

It seems instead, and the latest Politico report confirms this, that in the face of Falwell Jr.’s inappropriate comments and behavior, the school’s board of trustees opted to take no official notice for at least a decade. How could two men like Trump and Falwell be embraced — or at least not publicly admonished — by American Christians?

I think the answer to that question is found in the Old Testament book of Exodus. According to the scripture, the Hebrews had just narrowly escaped Egypt and, while Moses was receiving the material for the tablets of the Law on Mount Sinai, they fashioned a golden calf to worship instead of the God who had delivered them from enslavement.

Since then, the concept of the worshiping of a “golden calf” has become a stand-in for a supreme act of apostasy, the rejection of a faith once confessed. As Raymond P. Scheindlin, the Professor Emeritus of Medieval Hebrew Literature at the Jewish Theological Seminary, has written, the Hebrews “wanted an icon, a statue, an inanimate representation of God to give them confidence, His prophet being absent. ‘Give us a god to go before us,’ they said, ‘for we don’t know what has come of this man Moses.'”

In the Falwell dynasty and the Trump presidency, many white Christians found their golden calves — representatives who promised worldly power, despite their egregious moral shortcomings, at a time when evangelicals felt their place as America’s moral majority was slipping.

Given the similarities, it’s no surprise Falwell Jr. endorsed Trump.

Trump’s followers don’t care about the president using tear gas and riot police to disperse protestors in Lafayette Square so he could pose in front of St. John’s Church, clumsily brandishing the Bible as a prop, so long as he promises them preferential treatment, often at the expense of people of color and immigrants. As Michael Gerson put it in his 2018 cover story for the Atlantic, evangelicals now regard themselves, “hysterically and with self-pity, as an oppressed minority that requires a strongman to rescue it. This is how Trump has invited evangelicals to view themselves. He has treated evangelicalism as an interest group in need of protection and preferences.”

He elevated himself as their idol — a savior, in a way — and many fell at his feet. But as his grasp on re-election has slipped, even Fox News, a television network that was intrinsically tied to his administration, seems to have turned against him.

As Salon’s Melanie McFarland reported on election night, Fox was the first station to call Arizona for Biden, a decision that enraged many Republicans who insisted the decision was wrong.

Trump went on to baselessly accuse Democrats of trying to “steal” the election, a claim that Wallace pushed back on.

“This is an extremely flammable situation and the President just threw a match on it. He hasn’t won these states,” he said.

As a result, inevitably, Trump started attacking Fox News. They were now useless to him because of his all-or-nothing take on loyalty, just as he’s now useless to the network, rendered powerless after his loss (not that he’s conceding).

Meanwhile, since taking over Liberty, Falwell Jr. increased the school’s listed assets from just over $259 million to over $2.5 billion. Those interested in Liberty as an institutional bulwark against liberalism and worldliness were eager to brush aside Falwell Jr.’s indiscretions as long as he continued to bring in money for the university and the cause. But they too cast him aside when his public scandals impeded the cause.

Biblically, the golden calf narrative ends when Moses descends from the mountain and sees his people worshipping the idol. He becomes enraged, breaks the tablets and insists that the calf be destroyed, melted down and mixed with water. Moses then instructed the Hebrews to drink the bitter mixture as a reminder of their sins.

Perhaps women who spent their Thursday night praying outside the Clark County Election Department for the re-election of Donald Trump, are simply afraid to be confronted with their own.

While Trump wonders about “missing” military ballots, they appear to boost Biden in Pennsylvania

Listen to article Ms. Jennifer Ofori, the Obuasi East District Director of the National Commission for Civic Education (NCCE) has