Former Governor of Akwa Ibom, Obong Victor Attah has expressed displeasure over the nonchalant attitude the state government has accorded tourism in the state.

Attah who was specific about the poor state of Ibom Plaza, Unity Park and Tropicana complex, major and popular tourism spots in Uyo described their current states as worrisome.

The former governor said that the purpose for constructing Ibom plaza, meant to decongest traffic around the town centre and serve as a relaxation centre for residents has failed because the government was not up and doing in controlling illegal activities the lush relaxation centre.

He said, “The concept for the construction of the plaza was to solve traffic congestion around the circus, control street trading around the plaza and create social and relaxation centre for residents.

“So in the aspect of traffic it has not failed although commercial activities are now been conducted along the walkways, but in the aspect of commercial and social, it has completely failed because you see people selling things outside the open market provided within the plaza.

“The place is no longer been maintained and I hear now that criminals have taken over the place and that’s why I said the plaza has failed in the social and commercial aspects.”

Our correspondent reports that the plaza has now become a converging point for hoodlums who have rendered the area insecure for itinerant traders who have since taken over the open spaces at the plaza and passersby especially at night even as media reports surfaced last week that the toilets in the complex have been converted to a brothel.

On the Unity Park, Attach explained that the project was conceptualized to serve as a major leisure arena especially for children and youths in addition to accommodating the Ibibio Cultural Museum, but expressed dismay at the lack of government interest in putting the arena to proper and viable use.

“I won’t say that Unity Park has failed but it has not been developed. The concept was to create an open place with relaxation facilities where families can come together to relax. We need to have such a facility and maintain it.

“I was in Nairobi sometimes and I saw open places where people came to even have their lunch and I said to myself, these are Africans and we can have this kind of facility too for ourselves”, he said.

He regretted that the theme park and other leisure facilities at the Ibom Tropicana Entertainment Centre have not been put into use more than six years after they were built calling on the state government to do something urgent to readdress this.

Vanguard check shows that the park, covering a swathe of land was initially being occupied by private leisure concerns and were forced to vacate the area by the state government for redevelopment three years ago, but regrettably, nothing so far has been done.

State Commissioner for Culture and Tourism, Orman Esin did not respond to calls and a text message sent to him on the matter. 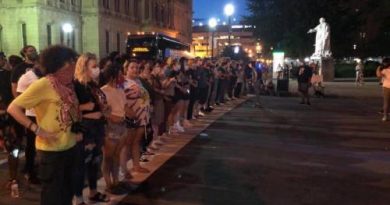 Listen to article The NPP in the Damongo constituency of the Savannah Region has lauded the achievements of Hon. Abu