The popular Edepie-Imiringi road linking Yenagoa, the Bayelsa State capital to communities in the East senatorial district of the state has been cut off by coastal erosion.

A section of the bridge head-on road linking several communities in Ogbia Local Government Area where crude oil was first discovered in commercial quantity and launched the country into the elite club of the petro-dollar country as well as Nembe in Nembe Local Government Area was undermined by erosion which caused a deep crater last Thursday.

A road closed sign was hurriedly erected close to the failed spot by concerned residents to warn motorists of the danger ahead.

NDV findings revealed that travellers heading to and returning from the oil and gas-rich Ogbia and Nembe Kingdom are now compelled to pass through Okarki community in Rivers State to get to their destination.

Sadly, the Opolo-Elebele route and the Elebele-Emeyal route which could have served as alternative routes have since been cut off by rampaging flood and another collapsed bridge thereby putting additional pressure on the now eroded Edepie-Imiringi road.

Also, the Otuoke-Onuebum-Agbura road which is one of the fastest routes to access Ogbia council through the Azikoro axis of Yenagoa, the state capital is presently not motorable due to the ravaging flood across the state.

“We saw the problem coming but surprisingly no action was taken by the authorities to mitigate the erosion threat. It all started as a small pothole close to the bridgehead but this year unprecedented flood accelerated the erosion menace. The troubled spot developed into a deep ravine leading to the closure of the road to traffic last Thursday,” a resident of Imiringi, Tony told NDV.““I was on my way to work in Yenagoa like several others that fateful morning when I met the sorry situation and had to make a detour through the long and tortuous Okarki route in Rivers State,” he added.

“This is the busiest route used by our people including oil workers, academic staff and students of the Federal Government Girls College, Imiringi, Federal University, Otuoke and the state-owned College of Health Technology, Otuogidi in the Ogbia kingdom.

“Another concerned resident, Ezekiel Azi said: “the Otuoke-Onuebum road which could have aided easy movement for residents heading to Ogbia- Nembe-Brass and also for those coming to Yenagoa is also not accessible today owing to flooding leaving us with no option but to go through Okarki in Rivers State which is a longer route.” They called on the relevant authorities to as a matter of urgency come to their aid by rehabilitating the collapsed portion of the road. 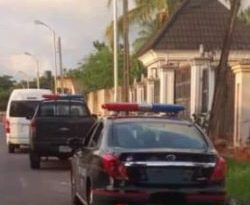