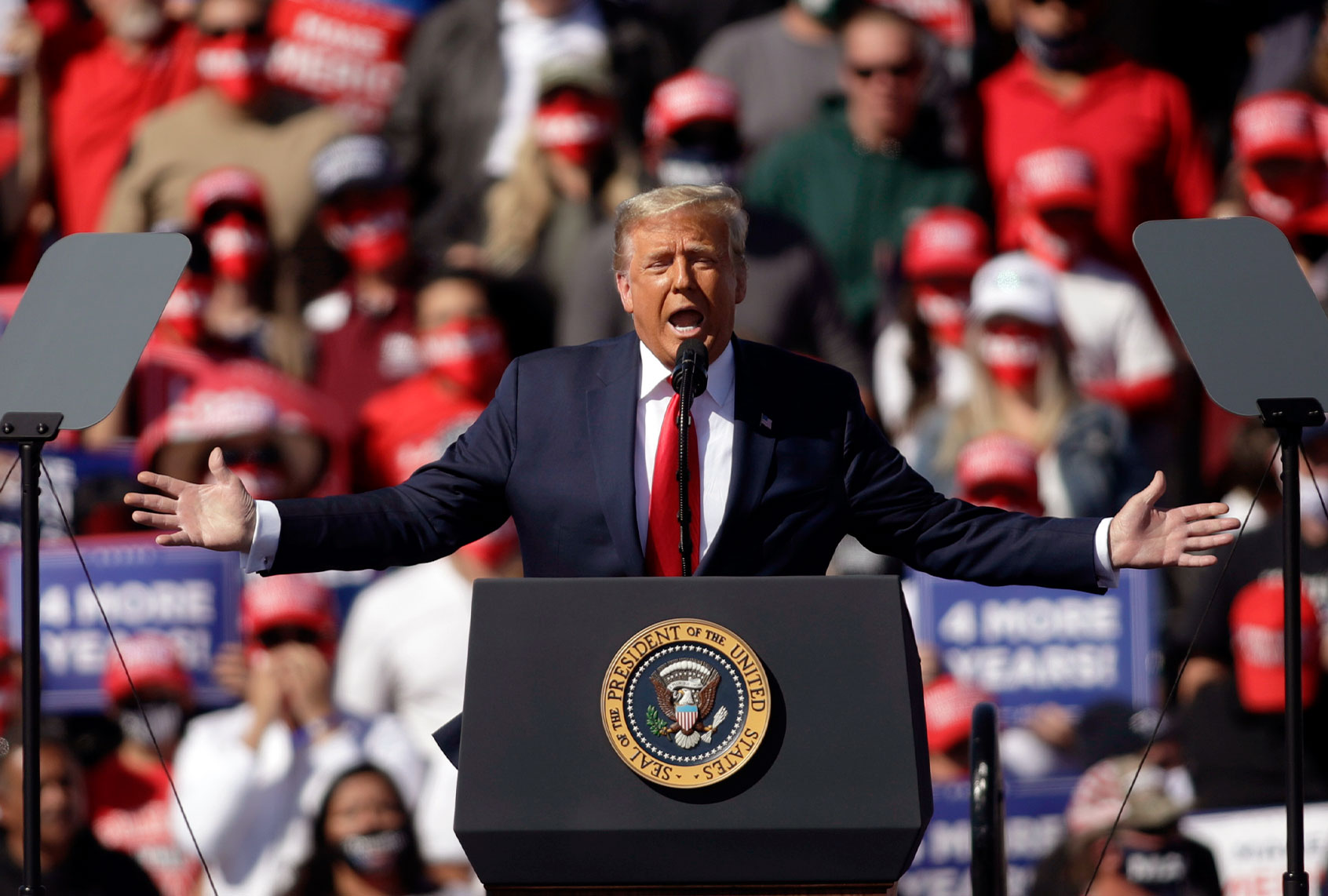 With poll numbers staying put and the odds of a Joe Biden win in Tuesday’s election looking good — possibly by a decisive margin — there’s mounting dread about how Donald Trump will behave after a defeat. After all, Trump is a sociopathic narcissist with the emotional control of a — well, I won’t insult toddlers with the comparison — and he lives in mortal terror of being viewed as a loser. He’s already made clear that he will refuses to concede, no matter what, and he’s grasping desperately for any way to get legal ballots thrown out so he can steal the election.

No wonder people are afraid Trump will go completely apes**t if his efforts to steal this fail and he actually loses. As Salon’s Matthew Rozsa recently explained in a popular piece, psychologists worry that the narcissistic injury to Trump will result in him lashing out “in his vindictive rage to punish an America which he may believe has consigned him to ‘loser’ status.”

On Friday, Ron Suskind of the New York Times published an article based on interviews with “some two dozen officials and aides, several of whom are still serving in the Trump administration,” who worried that “the president could use the power of the government” to lash out at enemies, try to steal the election or otherwise wreak havoc on the nation.

“Trump could do real damage to the country, his successor or presidential traditions,” Garrett Graff wrote Wednesday at Politico, adding that “there’s reason to wonder if a Trump transition might actually be the start of the wildest chapter of an already controversial presidency.”

“We May Need the Twenty-Fifth Amendment if Trump Loses,” blares a headline at the New Yorker.

Of course we should be worried that Trump, a vindictive man whose only true pleasures come from sadism, will abuse his power to punish Americans if he loses.

But let’s be honest: He’s also going to do that if he wins.

Heads or tails, Trump will be angry at Americans for not worshipping him in the way he believes is his due, and the next two and a half months are going to be hell. Moreover, win or lose, Trump supporters will continue to believe they are victims of the “liberal elite” and the “deep state,” and will keep on being resentful, angry and aggrieved, stocking up on guns and screeching on social media about how poorly they believe they’re being treated.

But at least if Biden wins the election, there will be light at the end of the tunnel.

We know that Trump and his supporters will act this way because that’s how they’ve acted for the past four years. After all, it was less than a day after Trump’s inauguration that the grievance politics and play-acting began. Trump insisted — and pressured his supporters and press secretary into insisting — that his inauguration was way, way bigger than Barack Obama’s, and that all the photos showing otherwise were somehow “fake news.” He obsessed for months about how the election had been “rigged” against him — even though he won! — because Hillary Clinton won the popular vote.

Ever since then, the running theme of Trump’s presidency is that he’s a nonstop victim of shadowy liberal forces trying to take him down. Robert Mueller, Adam Schiff, Nancy Pelosi, the media (especially female journalists), the “Democrat governors” and on and on: Trump’s conflicts are always about a conspiracy against him. They are never, ever his own fault for corruption, criminality, incompetence or just flat-out being the worst.

Trump even views the coronavirus, which is, you know, a virus with no real agency, as a plot to destroy him, as if all those people decided to get sick and die just to make him look bad.

Meanwhile, if there was one word to describe Trump’s supporters — who, let’s remember, were on the winning side in 2016 — it would be “bitter.” Turn on Fox News any random night, and it’s a full blown whine-fest about how alleged “elites” are trying to control them and ruin their lives. The fact that their party controls most state governments, the White House, the Senate and the federal courts never factors in. The narrative is one of perpetual victimhood.

Witness, for instance, this recent piece from National Review editor Rich Lowry, an alleged adult, entitled “The Only Middle Finger Available,” which argues that a Trump vote is “a gigantic rude gesture directed at the commanding heights of American culture.”

Of course, Trump is quite literally the “commanding height” of American culture right now, not just because he’s the most powerful person in the world but because his severe personality disorders have made him a black hole of attention.

But in the warped imagination of Trump-loving conservatives, they’re perpetual losers, even and especially when they’re winning. So they always imagine they are justified in lashing out and punishing liberals. Winning elections doesn’t mean trying to govern, just amassing more power to act out their revenge fantasies.

This is why the debates over whether Trump is “really” a fascist are somewhat missing the point. In the political science terms of government organization, he is not a fascist dictator. But the rhetoric, ideology and affect of modern conservatism have tipped strongly toward authoritarianism in recent years.

In more normal historic condition, conservatism is inherently a protectionist ideology, an attempt to preserve the current social order, with all its hierarchies and inequalities. But modern right-wingers imagine themselves as having already lost nearly all of that. They claim to be trying to restoring the lost (and mostly imaginary) “greatness” of the past, a narrative that’s a lot closer to fascism than conservatism.

That’s why the Trumpian slogan is “Make America Great Again.” There was a tepid effort by the 2020 Trump campaign, after four years in power, to update that to “Keep America Great.” But that reboot pretty much fell to the wayside and the campaign reverted to MAGA sloganeering. Trumpism always requires imagining that its adherents are the underdogs struggling against an all-powerful elite. Admitting the fact that they’ve been in power for four years — and squandered every opportunity to do anything constructive — is not on the table.

Trump is likely to throw a massive tantrum if he loses this election, no doubt. But there’s also a possibility that the blow to his ego will be such that he and his supporters will slink away in shame, especially if the election is a rout.

In the face of real defeat, Trump’s “bunker boy” side tends to show itself. He’s already canceled his appearance at the election-night party at Trump International Hotel, suggesting his reaction to a possible defeat is to hide away in the White House.

If Trump wins by whatever means, however, we’re looking at another long four years of him whining, playing the victim and abusing his power of office to punish anyone who didn’t vote for him. His followers will go right along with it, nursing endless grievance because, while they control most of the power in Washington, they still have to put up with “RuPaul’s Drag Race” and women talking back to them on the internet. The right will never stop casting themselves as the wounded victims of any and all social change. The most we can hope for from this election is that they’re handed a humiliation so big that it stuns them into silence, at least temporarily.

Zero hour for Democrats: At long last the voters will speak — if we can hear them

Biden should attack Trump as a massive, ludicrous failure — not just a tax cheat

What lies ahead: After the damage of the Trump era, can America avoid disaster?