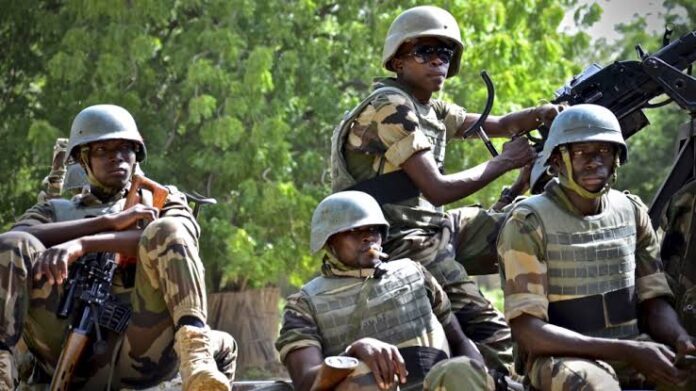 GENERAL UPDATE ON ARMED FORCES OF NIGERIA OPERATIONS FROM 22 TO 29 OCTOBER 2020
1. In line with our weekly schedule, this morning I will be briefing you on operations of the Armed Forces of Nigeria in conjunction other security agencies across the Country from 22 to 29 October 2020. The various operations have progressed satisfactorily with significant successes.

NORTH-WEST ZONE
2. Troops of Operation HADARIN DAJI have continued the aggressive clearance operations in the North-West zone of the country successesfully. For the period under review, farm and highway patrols were carried out within the zone thus boosting the confidence of the locals as well as commuters in carrying out their daily activities. The gallant troops of Operation HADARIN DAJI within the period carried out series of clearance operations, ambushes and other aggressive and confidence building patrols. These operations led to the neutralization of armed bandits, arrest of suspected bandits and their collaborators, rescue of kidnapped victims and recoveries of rustled cattle as well as large cache of arms and ammunition.
3. In one of the operations conducted on 24 October 2020, security forces arrested 13 suspected bandit collaborators at Tangaza town in Tangaza Local Government Area of Sokoto State. Similarly troops of Operation HADARIN DAJI in conjunction with the Nigeria Police Katsina State Command, on 27 October 2020, acting on credible intelligence, successfully repelled coordinated attack by bandits on revenge mission on Tsakiya Village of Safana Local Government Area of Katsina State. The gallant troops engaged the bandits in a gun duel thereby neutralizing 5 while others escaped with gunshot wounds.

4. Furthermore, the Land and Air Components of Operation THUNDER STRIKE acting on credible Human Intelligence reports as well as series of aerial surveillance missions neutralized scores of armed bandits. The successful operation was carried out to clear identified bandits’ camps in the Yadi and Kufai Shantu areas of Giwa Local Government Area of Kaduna State. Following the Air Components’ efforts at Kufai Shantu, the Land Component, supported by an attack helicopter, successfully assaulted one of the bandits’ hideout at Yadi, clearing 2 of 3 objectives. The ground troops subsequently fought through fierce resistance from bandits hiding under the foliage at the third objective and eventually overpowered the criminals, eliminating several of them.

NORTH EAST ZONE
5. In continuation of its efforts in the fight against terrorism in the North East zone, troops of Operation LAFIYA DOLE have continued with the aggressive clearance operations with vigour. Several land and air operations were conducted by the Armed Forces of Nigeria and other security agencies between 22 and 29 October 2020. During the period, troops recorded laudable successes in both land and air operations.
6. Within the period in focus, the Land Component of Operation LAFIYA DOLE under the subsidiary operation FIRE BALL, conducted several robust operations. Troops executed attacks on terrorists’ hideouts, repelled attacks on own troops’ locations and forestalled attack on Internally Displaced Persons’ convoy. During the encounters, the superior firepower of own troops resulted in decimation of several BHT/ISWAP terrorist elements, while 2, 3 and 8 of their fighters were killed in contact at Mallam Fatori, Ngwuri Gana and Jumacheri towns respectively, in Borno State. Large caches of arms and ammunition as well as materials meant to produce IEDs and 2 gun-trucks were captured from the terrorists. Also recorded during the period, troops successfully repelled 3 separate attacks by the BHT/ISWAP terrorists at Magumeri, Gajiram and Damboa in Borno State. In the encounters, a total of 13 terrorists were killed in contact and arms and ammunition were recovered. This is additional to the 22 of the terrorists killed at Damboa.
7. In a similar development, troops successfully foiled terrorists’ attack on a convoy of vehicles conveying IDPs from Maiduguri city to Baga town in Borno State. During the encounter, 3 terrorists were neutralized and some arms and ammunition recovered. Also, within the period, a cattle rustler/kidnapper at Takum Village in Takum Local Government Area of Taraba State was arrested. Similarly, 2 kidnappers, namely, Yahaya Mohammed and Juli Ardo were arrested at Zalau Village in Toro Local Government and Lariki Village in Kirfi Local Government Area, all in Bauchi State. All arrested criminals were handed over to the appropriate prosecuting authorities for further action.
8. Meanwhile, the Air Component of Operation LAFIYA DOLE, in its resolve to actualize the objectives of its subsidiary Operation WUTAR TABKI, conducted several air operations using a force package of Nigerian Air Force fighter jets and helicopter gunships in the North East zone. Several air surveillance and air interdiction missions were executed by the Air Task Force during the period under review, resulting in scores of devastating hits in multiple waves of attacks on various locations in the Zone. Air strikes executed on terrorists hideouts at Ngosike Village, a settlement in the fringes of the Sambisa Forest used by terrorists as a staging area from where they launched attacks on own troops and other unsuspecting civilians, resulted in the obliteration of several BHT/ISWAP elements’ hideouts, while several of their fighters were neutralize.
9. Another laudable success was recorded during air strikes on Ngwuri Gana Village near Damasak in the Northern part of Borno State, where terrorists assembled in preparation for attack against nearby troops’ locations. Scores of terrorists were neutralized and their facilities destroyed. These were achieved with the help of credible intelligence reports and the Air Task Force Intelligence Surveillance Reconnaissance missions that revealed terrorists’ activities in the locations.

NORTH-CENTRAL ZONE
10. In continuation of intensive kinetic operations against armed bandits and other criminals in the North Central zone, troops of Operations SAFE HAVEN and WHIRL STROKE conducted raids at identified criminals’ hideouts with attendant successes. These kinetic efforts were supported with Civil Military Cooperation activities in the form of stakeholders meetings, amongst others.
11. Notably, on 22 October 2020, troops of Operation SAFE HAVEN, acting on credible intelligence raided suspected cultists at Federal Low-cost area in Jos South Local Government Area of Plateau State. During the operation, 16 suspected cultists were apprehended with various dangerous weapons. The suspects are presently being profiled after which they will be handed over to the appropriate prosecution agency for further action. This was followed by another raid operation at the hideout of a suspected illicit drugs peddler at Afana village in Marsa district of Zangon-Kataf Local Government Area of Kaduna State on 24 October 2020. During the operation, troops apprehended the suspect, one Ishaku Thomas. Also recovered at the hideout were one locally made pistol, one cartridge, three 50kg sacks of substances suspected to be Cannabis Sativa, amongst other items.
12. Furthermore, troops of Operation WHIRL STROKE, on 24 October 2020, apprehended 3 suspected kidnappers at Mutum-Biyu village in Gassol Local Government Area of Taraba State. The arrests were made following actionable intelligence reports on the activities of the criminals in the area. Additionally, still on 24 October 2020, troops of 117 Battalion, in conjunction with local vigilantes, arrested a bandit, Ibrahim also known as “Yellow”, at Mararaba Udege in Nasarawa Local Government Area of Nasarawa State.
13. In addition, as part of CIMIC activities within the period, Headquarters Operation SAFE HAVEN fostered stakeholders meetings amongst the various ethnic groups in Plateau State. In this regard, between 22 and 26 October 2020, security meetings were held with locals at Dangyel in Jos South Local Government Area and Foron District in Barkin Ladi Local Government Area of Plateau State respectively. The meetings were aimed at fostering peace amongst the various ethnic groups co-habiting the various communities. In this regard, the locals are requested to cooperate with the security agencies by availing them with the required information that will be useful to our collective objective of taking out the criminals from the zone.

15. In a related development, troops of 4 Brigade arrested 6 suspected armed robbers with 2 locally made guns, 3 live cartridges, one knife, 3 mobile phones and a stolen vehicle at Uromi in Esan North East Local Government Area of Edo State. Similarly, between 22 and 24 October 2020, troops of 146 Battalion discovered and immobilized 2 illegal refineries, 3 storage tanks and one wooden boat loaded with crude oil around Patrick Waterside, Burukiri and Oputumbi in Bonny Local Government Area of Rivers State.

16. Furthermore, Operations CALM WATERS II and SWIFT RESPONSE have continued to record more successes. Within the period under review, several bags of foreign parboiled rice suspected to be smuggled from Cameroon were arrested and handed to Nigeria Customs Service. Also, some boats carrying unspecified quantities of Premium Motor Spirit (PMS) were arrested. Additionally, the patrol team of Forward Operating Base IBAKA intercepted 2 wooden boats, with 61 drums of PMS collectively. The boats were intercepted at lkang Creek, Cross River State. Preliminary investigation revealed that the product was meant to be smuggled to the Republic of Cameroon through lkang waterways. Meanwhile, the 2 wooden boats along with the drums of PMS and the 4 suspects were evacuated to FOB IBAKA Base for further action.

17. Overall, the Military High Command encourages the troops and personnel of other security agencies to remain dogged and sustain the tempo in all the Joint Operations Areas. The High Command of the Armed Forces also reassures the general public of its unwavering commitment to securing the country for all human activities to strive. Members of the general public are enjoined to continue providing timely information on the activities of criminals in their various localities to the nearest military and other security agencies location for prompt and effective action. Thank you. 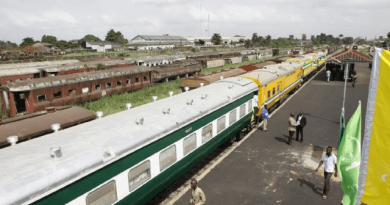 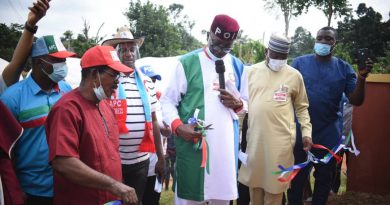 Three to Die By Hanging For Kidnap of Reverend Sisters | % % ... See MoreSee Less

Three to Die By Hanging For Kidnap of Reverend Sisters | % %

Three persons who kidnapped three Reverend Sisters at Onipetesi area along the Ore-Lagos highway have been sentenced to death by hanging.
View on Facebook
·Share

A report received by Olika Reporters News International indicates that operatives of the Nigeria intelligence service, on Monday evening
View on Facebook
·Share