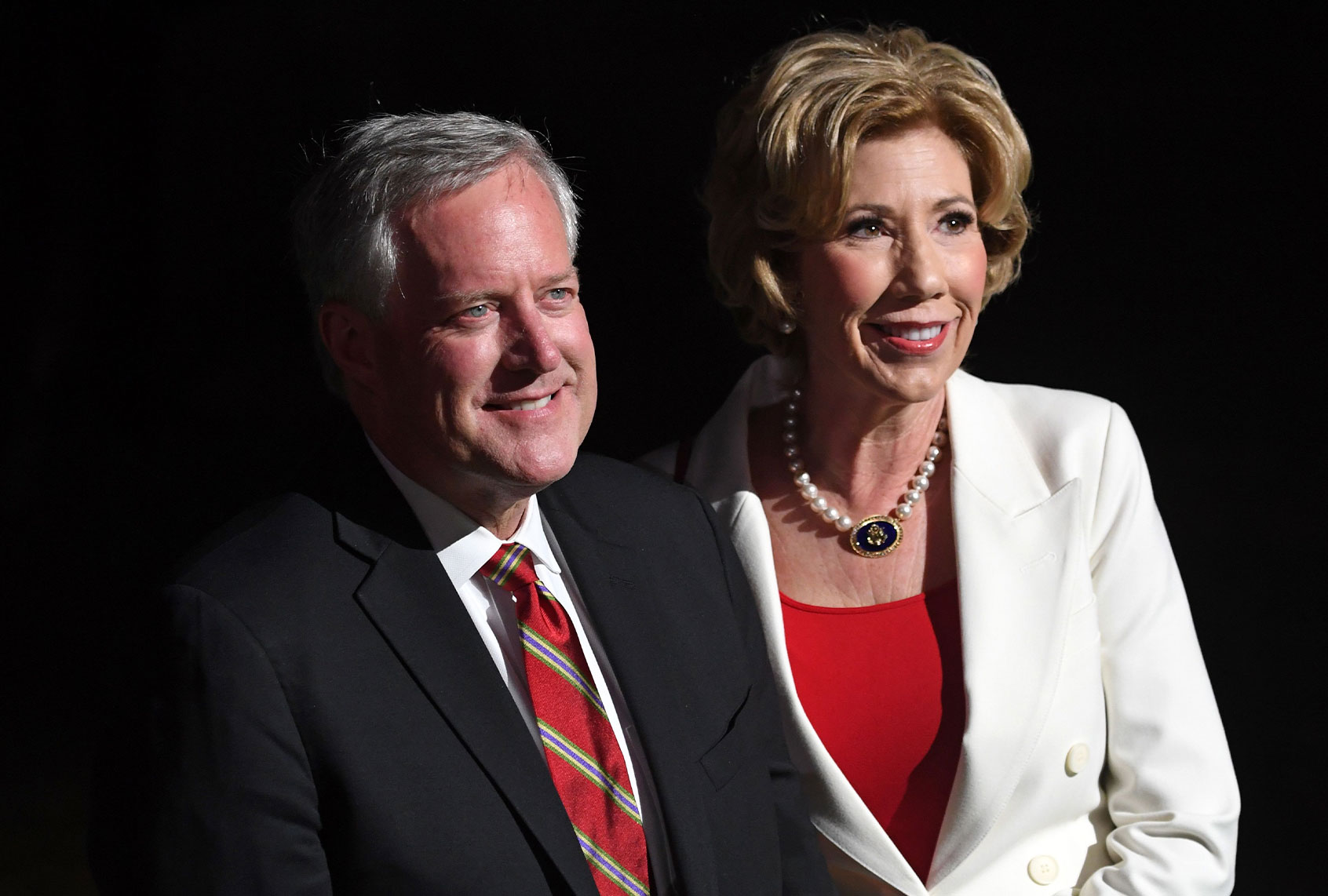 White House chief of staff Mark Meadows appears to have tapped into federal resources to help a friend of his wife’s raise money for her campaign to fill his congressional seat, government records show.

As Salon previously reported, Meadows’ congressional campaign committee spent $312 on food and $15 for parking fees on Jan. 21 of this year at the Grove Park Inn & Resort in North Carolina. However, Meadows himself was in Washington that day, where he spoke with press during a break in President Trump’s Senate impeachment trial.

Meadows’ wife, Debbie, however, was on the last day of a four-day swing through Meadows’ former district in western North Carolina, holding a series of fundraisers for her friend, Lynda Bennett, a candidate for the seat that Meadows had recently announced he would leave.

The Bennett campaign also received no contributions from anyone over those four days of a supposed fundraising trip, with the exception of Mark Kolokotrones, a California-based financier and Heritage Foundation member, who maxed out to Bennett’s primary and general election funds on Jan. 21.

Congressional records show that a field representative for Mark Meadows’ congressional office, Jordan Whisnant, reported $155.25 in auto mileage expenses for Jan. 17 through Jan. 22 — funds taken out of Meadows’ taxpayer-funded congressional Members’ Representational Allowance (MRA). Whisnant, a federal employee, logged a total of 310.5 miles over the five-day period of with Debbie Meadows’ district visit. Whisnant also charged a $21 meal on Jan. 22, the day after the tour ended.

“It’s a violation of both House Ethics and House Administration Committee rules to use MRA funds for campaign purposes,” Brett Kappel, a top government ethics expert and attorney at Harmon Curran, told Salon. “Obviously Meadows is now out of the reach of the House Ethics Committee, but his staffers (who are still manning the office for the 11th congressional district of North Carolina under the supervision of the Clerk of the House) could be on the hook if they knew about or participated in this misappropriation of congressional funds.”

The House Ethics Committee did not immediately reply to Salon’s request for comment.

Neither Mark nor Debbie Meadows personally contributed to Lynda Bennett’s campaign. But Debbie Meadows and Polly Jordan, the wife of Rep. Jim Jordan, an Ohio Republican and friend of the Meadowses, held another round of events with Bennett in North Carolina in the first week of February. Whisnant logged another $125 in auto mileage around that time.

The Meadows campaign also paid aide Henry Mitchell more than $5,000 for “field representative mileage” in five installments between January and March — including $1,592 for that first week of February.

“There’s still campaign work that can be done as a campaign winds down. It’s not out of the ordinary to keep someone around to help out,” Libowitz said of those expenses. “But at 58 cents a mile, back-of-the-envelope math has it at 900 miles some weeks. That’s a ton of driving.”

It’s not clear why Mitchell was putting on so many miles, or where. Around that time, however, Bennett’s fundraising had flagged. At the same time, the Republican primary to replace Meadows had begun to grow chaotic, with Bennett facing a number of candidates, some to her right.

FEC filings show that as Bennett’s fundraising slipped, Meadows began channeling money to her campaign through two of his other groups: his leadership PAC, Your Voice Counts; and his PAC, the House Freedom Fund.

Your Voice Counts gave $848.56 to the Bennett campaign on Feb. 4, the day after the early February events featuring Debbie Meadows and Polly Jordan, according to federal filings, and an even $2,000 on April 15, two weeks after Meadows officially resigned from Congress to join the White House, records show.

The Meadows campaign itself reported giving $4,000 to Bennett’s campaign, half of it for the Republican primary and half for the general election. The donations came on March 5, the day after Trump announced Meadows would become White House chief of staff.

In the end, Meadows’ efforts were not enough for Bennett, who lost her June 23 primary to pro-Trump political newcomer Madison Cawthorn. That same day, however, the Meadows campaign — which had long since closed up shop, with Meadows three months into his White House tenure — reported a $2,300 payment to Henry Mitchell, the aforementioned field representative, for “management consulting.”

One week later, on the last day of the Meadows’ campaign’s official existence, it reported a $600 expense at a Safeway grocery store. Campaigns are prohibited by law from spending money on personal expenses, including meals and groceries.

Republican operatives in North Carolina speculated from the beginning that Meadows was trying to tip the scales in his district in Bennett’s favor, according to Politico, and observers have noted a number of coincidences. Bennett announced her candidacy on Dec. 19, 2019, just hours after Meadows first shared the news of his retirement — the day before the filing deadline to run for Congress, and two days after the deadline that prevents state officeholders from changing elections.

Further, the Meadows and Bennett campaigns, along with Right Women PAC, founded by Debbie Meadows, are the only three political committees in the U.S. to report payments to a company called Tower Digital. That company was founded by Meadows’ brother, who seems to have registered the Bennett campaign’s web domain name in October 2019, two months before Meadows announced he would not seek re-election.

Perhaps most telling, Debbie Meadows — who is believed to have a personal connection Trump after she stood by him in the wake of the “Access Hollywood” revelations in the waning days of the 2016 election — personally called the president to solicit his endorsement for Bennett, which he provided on June 4. Cawthorn’s primary victory was a rare loss for a Trump endorsee, and at least a minor black eye for the president.

Meadows seems to have moved on. His most recent filing shows that on Oct. 6, he gave $50,000 to his wife’s PAC, Right Women. She transferred $5,000 to Cawthorn’s campaign that same day.

The next day, however, Right Women spent $290 on food and beverage at the White House. On Sept. 4, the PAC dropped about twice that amount at the exclusive in-house restaurant. Normally the White House mess is strictly reserved for high-level officials such as cabinet members and other dignitaries, but the president’s chief of staff would have no problem getting in.

Everything we suspected about Donald Trump has come true

When Everyone In Uromi APC And PDP Has Good Word About One Person, Just Know That The Person Is A Rare Leader. Prince Kenneth EdenojieHas The Capacity To Represent Uromi And Esan Land At All Levels Of Leadership. I Respect His Decision Not To Say Anything For Now But We Must Commit Our Very Best To Represent Us. Aimhenya ... See MoreSee Less

He's not a bad choice... Uromi needs someone with morals and integrity

Thursday, December 19, 2019 – Abuja, Nigeria // It was celebration supreme at NAF Conference Centre and Suites, Abuja on

LIVE: Can Nashville pull off the shock against Toronto?

How sunshine can make the railways greener