RICE millers under the auspices of Rice Millers Association of Nigeria, RIMAN, Thursday, disclosed huge losses to hoodlums’ attack and looting under the guise of #EndSARS protest.

Making this known in a statement signed by the National President, RIMAN, Peter Dama, the association said damage caused and property lost were colossal, which its members are still in pain.

The association described the looting as shock, because buildings belonging to its members were set ablaze and rice mills reduced to rubble by the miscreants.

According to the statement resultant impacts on the rice mills would create some deficits in contribution to the National Food Security by the association.

The statement reads in part, “Rice Millers Association of Nigeria, RIMAN, is taken a back at the devastating destruction, looting carried out against its members, amongst whom are Shamad Rice Mill Yola, Glams Foods Lagos and several others by hoodlums and miscreants under the guise of Endsars peaceful protest in the country recently.

“This act is condemnable, highly regrettable and insensitive, regrettably, during these attacks, Tons of milled Rice, Paddy, furniture machines equipment and operational vehicles at the premises, of these Rice mills were destroyed and looted while some parts of buildings were set ablaze. At the moment these rice mills factories are in rubbles.

“RIMAN is therefore shocked and sad at the level of the havoc that was carried out on these Rice Mills and other government and private properties within the country.

“The resultant impacts on these Rice mills will create some deficits in our members contribution to the National Food Security and Rice Value Chain, as the affected Rice mills will be shut down for a while at this critical period with huge debts to pay.”

However, the association called on government to intervene by assisting them with funds to bounce back in order for the rice value chain not to suffer, if not will lead to high cost of rice and many Nigerians would not be able to afford the commodity.

“RIMAN therefore calls on Government to as a matter of urgency, assist the Rice millers with funds to rebuild and restock to commence their operations, as most of them, took bank facilities to answer the call by government to add to National Food Security deficit, particularly on rice self-sufficiency in the country.

“RIMAN also appeals to government to provide adequate security coverage to Rice mills under threat, in order to avert future occurrence”, it demanded.

The association also called for compensation of its members that have suffered losses from the activities of miscreants in order to enable them continue in business.

“RIMAN also expresses its sympathy to all those, whose properties  valuable assets, milling equipment, were destroyed, vandalized or  looted, and prayed that the authorities will compensate them on time so  that they can resume operations.

“RIMAN also appeal to the Nigerian youths to sheath their swords, since they have spoken loud and clear and government has heard them. They should therefore retreat and await the implementation of government promises to them.

“We also further advice that in future Nigerian youths  should explore dialogue and Negotiations with authorities whenever t ere are grievances to resolve in order to avoid miscreants from hijacking their well-intended moves meant to move the nations forward”, it added. 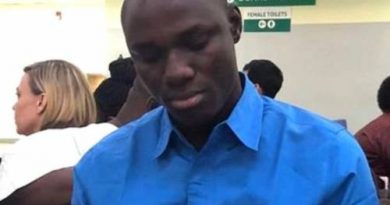 Samuel Ogundipe: The Bone Is Not Guilty When You Get Cut From Chewing It By Jonathan Abang-Ugbal

The Presidential Advisor On Health, Dr. Anthony Nsiah-Asare, has stated that, to the Akufo-Addo-led NPP administration, mental health remains a