FOR the management of the Nigeria Police Force Pensions Limited, NPFPL, not even the axiomatic sky is the limits. It is only a stepping stone to greater heights because the stakes in the pensions industry will always be high.

That is the worldview that drives the Pension Fund Administrator, PFA, and for her clients, men and women of the Nigeria Police Force, that pragmatic philosophy only means one thing – good news.

When it was established six years ago, the idea was to have a PFA exclusively responsible for pension management of all police personnel, according to the Pension Reform Act, PRA 2014. Before then, policemen were scattered in all the other 20 PFAs. The PFA since inception has worked hard to justify its license not just by meeting the benchmark expectation but actually exceeding it through creative innovations that make the welfare of police officers the centre of its gravity.

Many retired police officers concur that the PFA has not only deliberately made their clients – policemen – their  numero uno  in terms of priority but indeed, their only priority.

Sources within the organisation aver that the prioritisation policy is deliberate in furtherance of the PFA’s stated mission, which is “to provide quality customer and financial advisory services to stakeholders and adopt investment strategies that would yield the best possible returns on their pension assets.”

Realising this laudable mission in an industry as competitive as the pension industry, especially by a new entrant, entails financial creativity at its best. On this score, the PFA has excelled by going beyond what is considered usual in the industry.

Even their competitors in rival PFAs acknowledge that when it comes to the welfare of clients, the NPF Pensions seem to have an edge as they are always on top of their game.

A source within the organisation who pleaded anonymity put it thus: “For us, thinking outside the box is more than just a business cliché. As a one-customer PFA dealing exclusively with the police, we knew that the only way to deliver handsomely on our mandate is to approach our task in new, innovative ways. And the only way that can be done is to conceptualise the problem, which in our situation means a retiring police officer, differently.”

One of the creative ways the NPF Pensions devised to make life more meaningful for policemen in retirement is the introduction of the Retiree Resettlement Support Scheme, RRSS, which is the payment of certain amount of money to retiring police officers as welfare support. The RRSS is not part of its mandate. In fact, till date, it remains the only PFA that is giving back to its clients.

Introduced in 2017, the scheme has gone a long way in enhancing the welfare of policemen in retirement. Our sources informed that so far, about N1.5 billion has been paid out to 10,400 retirees.

The RRSS is a freebie. For any other organisation, the idea of a freebie to its clients would be a big deal. But for a company that is always striving for excellence, nothing short of the best is good enough. And living up to its reputation of an organisation that is always upping the ante in order to deliver maximum benefits to its clients, the NPFPL yet improved on what is already a benchmark in the industry by further raising the bar.

In 2018, the RRSS was further enhanced for the senior officer cadre from the rank of Commissioner of Police and above.

And since the NPF Pensions leadership believes in the ‘what is sauce for the goose should also be sauce for the gander axiom,’ it has also considered and approved that starting from October 1, 2020, the payment of RRSS for officers from the cadre of CSP and below be reviewed upwards by 100 per cent.

This gesture is remarkable and the beneficiaries are appreciative. Mr. Charles Effiong who retired in 2019 as a Superintendent of Police, SP, said the largesse came in handy.

“When we retired, we were not paid our retirement benefits immediately. We were told that the Federal Government was yet to release our accrued benefits but the PFA came to our rescue with the RRSS funds that enabled me to relocate from Lagos where I was serving before retirement to Uyo, Akwa Ibom State where I intend to settle.”

Effiong believes that things will even get better now that there is an upward review and a promise by the NPF Pensions of continuous enhancement of the scheme as the company’s income increases. For a retiring officer to be eligible for the RRSS, the RSA account must have been domiciled with the NPF Pensions for a minimum period of two years. Many police officers say that is a fair deal.

“We have every reason to be with NPFPL for life,” enthused a serving police officer who pleaded anonymity. “Why would any policeman not pitch tent with the NPF Pensions?” he queried and provided the justification for a stay: “Prior to its establishment, many policemen on the Contributory Pension Scheme, CPS, were neither receiving statements on their Retirement Savings Accounts, RSA, nor had any communication with the PFAs, and, therefore, didn’t know what was happening to their accounts. All that is now history. Not only that, the PFA continues to reinvent itself by improving retirement benefits even when we least expect it, moreover, NPF Pensions is located in every Formation and Command and therefore, easily accessible.”

Many retired police officers are grateful that in this pandemic era when most organizations are scaling back their expenses because of liquidity problems, NPF Pensions is doing the opposite. But even as good as things are now, the PFA is assuring their customers that the best is yet to come. 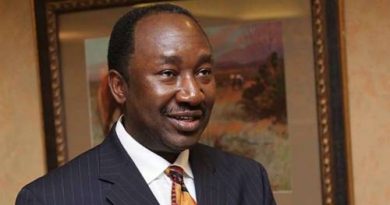