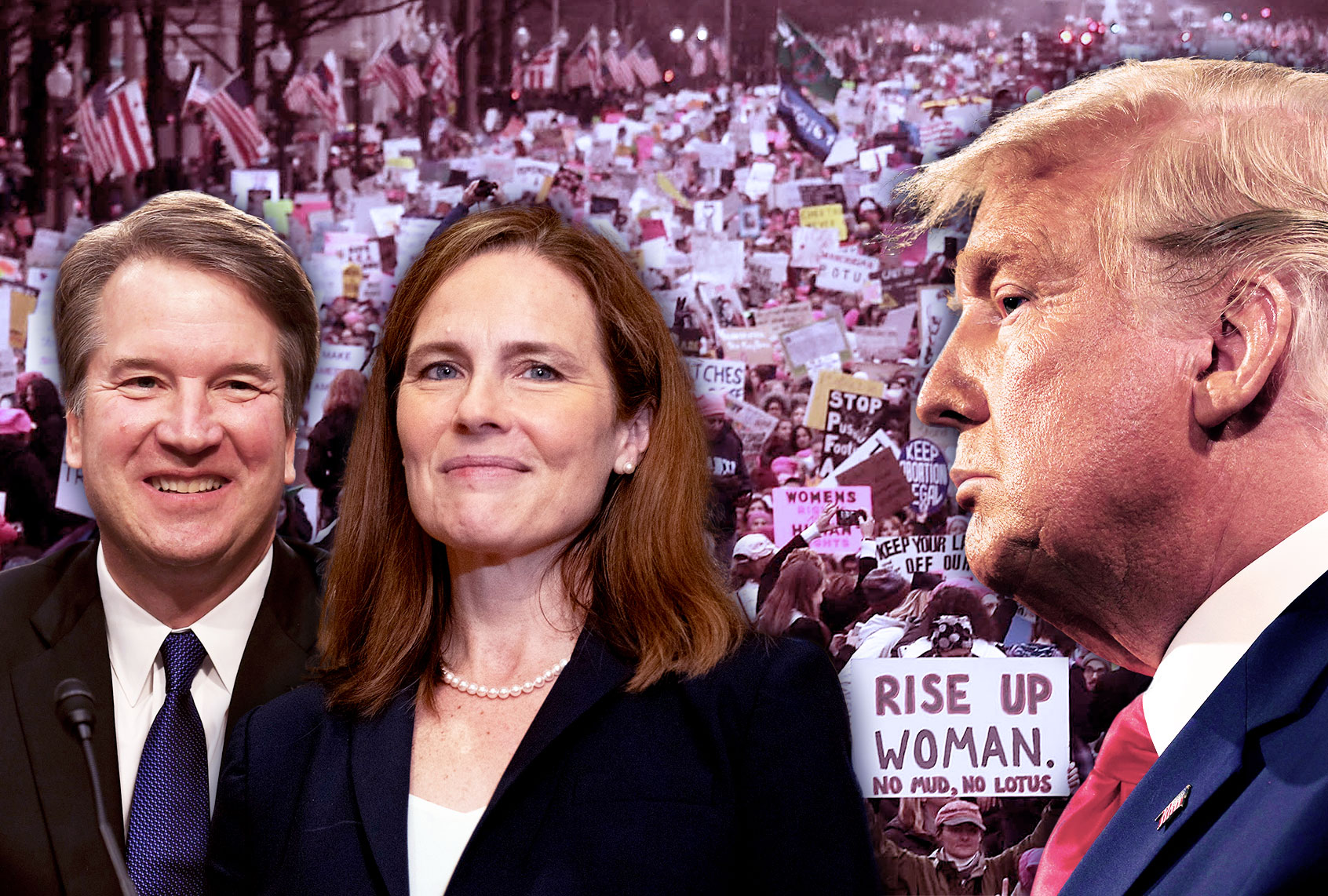 It was five years and two months ago that candidate Donald Trump became livid that a mere woman — Fox News host Megyn Kelly — had the temerity to talk back to him, and responded with a vile sexist dig. Kelly is no friend to feminists, but for once in her miserable career as a right-wing troll, she had done the right thing: Standing up to Trump’s sexism.

There was loud outcry at this sexist sneering, but it was also clear that Trump gambled correctly in believing that the Republican base would be thrilled at this misogynist outburst and would embrace his candidacy as a weapon against any women who injured their sensitive-snowflake feelings by speaking up against sexism.

Now, five-plus years later, Trump and the Republicans are still at it, swearing in Amy Coney Barrett as the newest associate justice of the United States Supreme Court. Barrett isn’t there because she’s especially qualified or intelligent. No, the entire purpose of her nomination in the last days of the campaign is to get in one more giant fuck-you to feminists before the women’s vote throws Trump out on his butt.

It’s all part of the same project: The right is using Trump’s presidency as a weapon to punish women for speaking out against sexism, and to put women in their place.

Of course picking Barrett over any other cookie-cutter right-wing ideologues was about trolling feminists. The “joke” is that they’ve replaced a legendary feminist — the recently departed Ruth Bader Ginsburg — with a woman who believes husbands are the “heads” of their wives and who refused to agree with the 1965 Supreme Court decision that legalized birth control.

In case there is any lingering doubt that Republicans view Barrett’s nomination mainly as a way to trigger the feminists, the Republican House Judiciary Twitter account announced the confirmation with this tweet:

That the first impulse of whoever runs the official account of a House committee’s minority was to snap Clinton’s bra strap, virtually speaking, tells the whole story about how much sexism has pickled right-wing brains. The entire GOP now exists primarily as a weapon to lash out at liberals for daring to make conservatives feel bad about sexism, racism and other forms of bigotry.

The years between Trump mocking women’s menstrual cycles and Republicans putting Serena Joy on the Supreme Court  have been one long, miserable temper tantrum by right-wing men who are furious at feminists for demanding equality, furious at Hillary Clinton for believing that a woman could be president, and furious at the #MeToo movement for demanding women’s right to go through life unmolested by sleazeball men.

It’s impossible to catalog the amount of abuse that has been heaped on American women over the past five years. There was the “grab ’em by the pussy” tape and the “lock her up” chants. There’s the way Trump lashes out at any female reporter who challenges him and the way he and his supporters obsessively hate on any woman, from the members of the “Squad” to Speaker of the House Nancy Pelosi, who talks back to him. There’s Trump’s reflexive use of the word “nasty” to describe any woman who speaks out. There’s the utter fury of Brett Kavanaugh at attempts to hold him accountable for an accusation of sexual assault, which spread like wildfire through the right, as conservatives nationwide screamed in outrage and fear at the very thought that violence against women should ever be held against a white man, especially an upstanding upper-class conservative.

Then there were the policy assaults on women. Trump’s administration has waged war on contraception access, trying to end coverage by health insurance and cut off funding for clinics that offer birth control at discounted rates. Republicans took yet another whack at trying to ban abortion with Kavanaugh on the court. That effort failed because of the legal sloppiness of the case, but there’s little doubt that with Barrett on the court, the next pass will succeed. (Unless, of course, Democrats are able to expand the court!) The Department of Education has rolled back protections against sexual harassment and assault, for both college and K-12 students. The Department of Justice has tried — and so far failed — to argue that taxpayers should fund a legal battle between Trump and one of the two dozen women who has accused him of sexual assault.

Much attention has been paid to the role that racism played in the election of Trump, but research shows that misogyny was right up there, too. Holding sexist beliefs was nearly as strong a predictor of a vote for Trump as holding racist beliefs.

Plenty of feminists saw this coming years ahead of time, sounding the alarm about pre-Trump misogynist movements like Gamergate and the bizarre but loud tantrum many men had about lady Ghostbusters. There’s also been significant evidence that the neofascist movement uses misogyny as a recruiting tool, to get bitter and insecure young men in the door before indoctrinating them with white nationalism.

But those warnings were largely ignored by a mainstream media that was not just male-dominated but run in part by sexual harassers and abusers who were later outed by the #MeToo movement. It was made worse by those on the left who hated Hillary Clinton, often for reasons that reeked of sexism, and were quick to shame woman who objected to the Hillary hate as “vagina voters.”

This whole situation is depressing as hell, but there is hope, possibly more than on any other progressive front: American women are extremely angry about all this.

The misogyny of the Trump administration and their supporters has been met with a feminist uprising unlike any that’s been seen since the ’70s, from the Women’s March to the #MeToo movement to the 2018 midterms in which a record number of women were elected. If Trump is defeated at the polls next week, it will largely be because of women, as polls show they support Joe Biden by huge margins, while more men still support Trump.

It’s a bummer it had to get this bad before so many women woke up, of course. But feminist momentum is real, even if it’s fueled by so many Jill-come-latelys. With that kind of power, there’s a chance to right this ship. By being so over-the-top with the misogyny and electing a man who literally brags about how much he enjoys committing sexual assault, Republicans may have pressed their luck too far. The feminist backlash they’re facing could change the world.