This is the concluding part of the piece which was first published three weeks ago. Last week ended thus: A few weeks before stepping aside, General Ibrahim Babangida in 1993 promulgated the Forfeiture of Assets Decree No. 54 of 1993.

THE Decree returned the properties seized by the Justice Okunribido’s panel of 1976 to some former governors and former Ministers.

Mr. Richard Akinola, a notable journalist has since published the names of the properties and their owners, while Mr. Biodun Olufowobi alias Pabiekun, a notable lawyer and Mr. Tunde Kamilu Kasali, a lawyer and former Executive Secretary of the Revenue Mobilisation Allocation and Fiscal Commission, have both argued on the issue of conviction or non-conviction.

Most Nigerians were alarmed by the action of General Babangida because he was part of the Supreme Military Council headed by General Murtala Ramat Mohammed that seized those properties in 1976. Decree 54 was highly selective in that it only named certain recipients and not all were found guilty by the Justice Okunribido panel.

On July 3, 1996, General Sani Abacha also promulgated the Forfeiture of Assets (Release of Certain Forfeited Properties etc.) Amendment Decree No. 21 of 1996. Regrettably names of former ministers and former governors were again not mentioned.

Among names not mentioned in the two decrees were that of Chief Athony Enahoro and Mr. J.O. Adeyemi-Bero, the former Chief of Staff to the first Military Governor of Lagos State, the late Brigadier Mobolaji Johnson, who claimed that he was the owner of Plot 177 known as Eko Courts Towers, Victoria Island, Lagos and 25, Cooper Road, Ikoyi, Lagos. While Mr. Adeyemi-Bero went to court through his counsel, Professor A.B.

Kasumu, and lost later at the Supreme Court, Chief Enahoro did not go to court.

Instead his family made an appeal to the government for leniency and pardon so that his properties which he built in Lagos even before 1960 and were confiscated by the Justice Okunribido panel could be returned to him. The appeals for pardon I am told started during the tenure of former President Goodluck Jonathan.

With the recent pardon by President Muhammadu Buhari, the expectation now is that the properties will finally be returned to the Enahoro family. As they say all is well that ends well.

In spite of this, the contribution of Chief Enahoro to this country is always appreciated. A nationalist par excellence, he moved the motion for Nigeria’s Independence; he led the Mid-West delegation to the ad-hoc Constitutional Conference in 1967; he became a Minister in Nigeria, led Nigeria’s delegation during the civil war to the peace conferences, he fought for democracy during Abacha’s tenure at the risk of his personal safety. He did more for this country than we can ever be grateful for.

He is a product of a family that has served the country meritoriously, notably my friend, Ben Enahoro, former Sergeant at Arms in the National Assembly; Mr Mike Enahoro, a veteran television broadcaster; Chief Edward Omokwale Enahoro, a diplomat; Henry Ehikpehale Enahoro, a Professor of Mechanical Engineering and Peter Osajele Aizegbeobor Enahoro, a journalist. 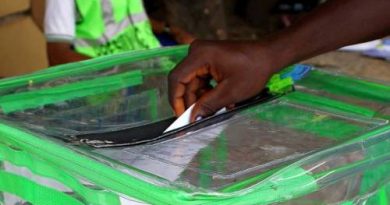