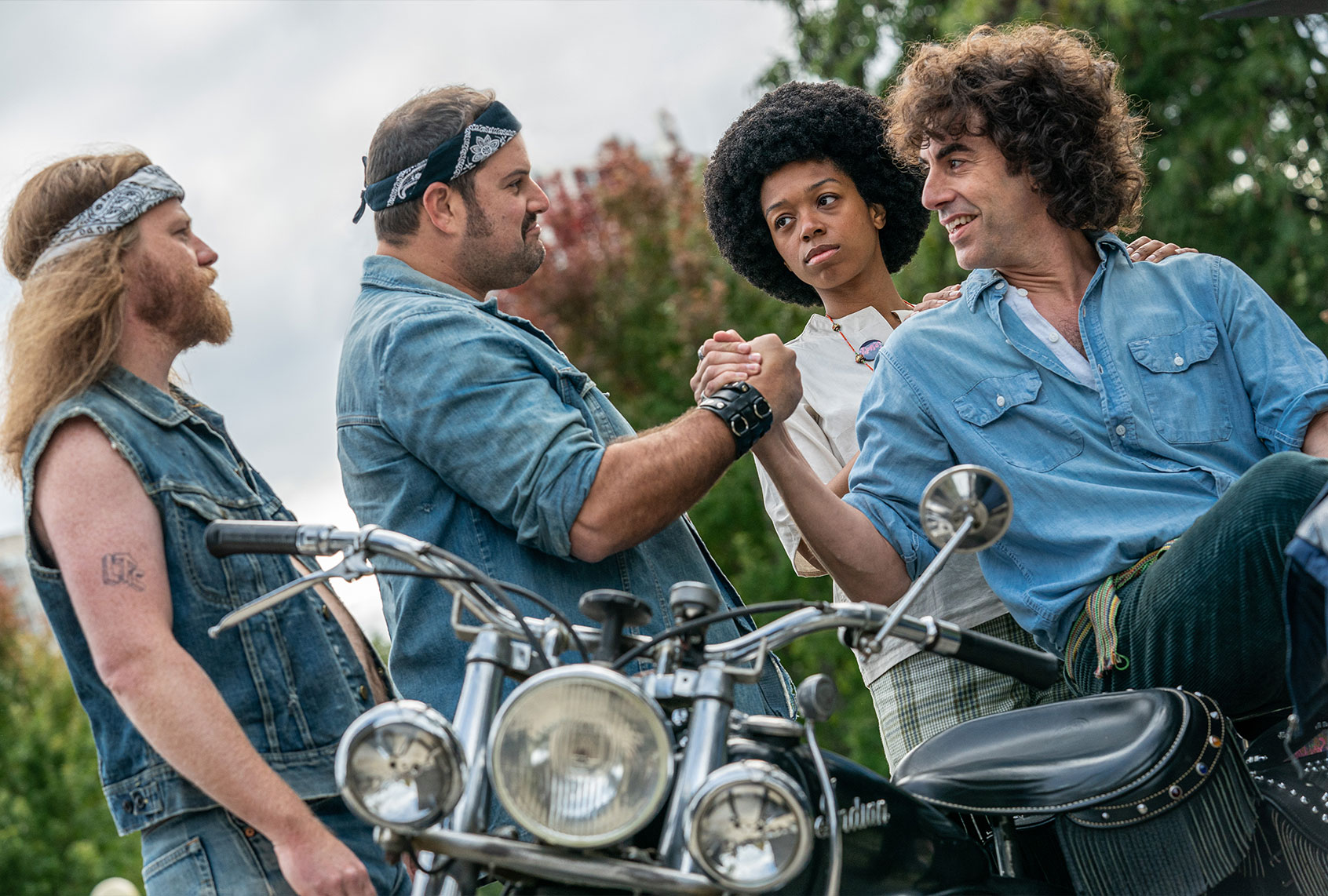 It’s finally October, so that means spooky season is truly officially upon us. Thankfully, there are a lot of horror and thriller films available to stream on Netflix this month. There’s “1922,” the 2017 adaptation of Stephen King’s novella of the same name in which Thomas Jane stars as a man who manipulates his son to kill his mother — and then the two are forced to live a cursed life together as killers.

There’s “Bird Box,” which, as Salon’s Melanie McFarland wrote in 2019, “if the most memorable psychological thrillers and horror movies are metaphors of society’s ills, ‘Bird Box’ is a two hour and four minute manifestation of Trumpian fear and loathing.”

“The world is sunny and safe and full of horses, until it isn’t,” McFarland wrote. “Within the space of a prenatal appointment it falls into chaos.”

You’ve got some films that are beloved part of cult slasher and thriller franchises, like “Cult of Chucky” “Paranormal Activity,” “Poltergeist” and “Sinister.” And then there are others that are still under-appreciated like “The Girl With All the Gifts,” which Vulture describes as “the best zombie movie you probably haven’t seen.”

If horror isn’t your thing, no fear. There’s a lot of other interesting stuff coming to Netflix this month — from a German series about the cutthroat world of 20th century breweries to a splashy docuseries about students at Gallaudet University, the world’s only university in which all programs and services are specifically designed to accommodate deaf and hard of hearing students.

Here are some of our picks:

In this new Netflix original series set in 1900, Curt Prank, an ambitious and mysterious newcomer, arrives in Munich with one goal: build a beer tent for Oktoberfest to seat 6,000. Curt has a shady past — and doesn’t think twice about blackmailing allies or even murdering the competition — and arrives in Munich determined to crash the local Oktoberfest with his own brewery. But when his daughter falls in love with the heir to a rival brewery, a violent chain of events is unleashed that will threaten both families’ futures.

“Oktoberfest: Beer & Blood” is written by Ronny Shalk, who was a writer on another German Netflix hit, “Dark.”

Documentary filmmaker Kirsten Johnson is a believer in the power of true stories, but in this film she indulges in some escapism. As a way of coping with her 86-year-old father’s inevitable death, she has him stage various tragic demises — falling down stairs, tripping on an uneven sidewalk, getting hit by a bus — and films him “dying,” again and again and again.

But this touching film is about more than death; as cliche as it sounds, it’s about the lives we live before it, and the ways in which we process when those we love are on the decline.

Speaking of escapism, “Emily in Paris” definitely has some 2020 “Sabrina” vibes — that is if Audrey Hepburn (or Julia Ormond) was playing a 20-something marketing executive from Chicago who lands in Paris with a go-getter attitude and a propensity for personal and professional mishaps. The series, which was created by Darren Star of “Sex and the City” and “Younger” fame, follows Emily, played by Lily Collns, over 10 episodes as she adjusts to life in a new country and has all the “fish out of water” adventures that come with it.

Based on the podcast of the same name, and from host Hrishikesh Hirway and Oscar-winning filmmaker Morgan Neville, each episode of “Song Exploder” features some of the world’s greatest musicians as they reveal how they brought one of their songs to life.

Using archival footage, in-depth interviews and raw recordings, viewers watch as artists like Alicia Keys, Lin-Manuel Miranda, R.E.M and Ty Dolla $ign break down how some of their most groundbreaking and popular songs — “3 Hour Drive,” “Wait for It,”  “Losing My Religion” and “LA,” respectively — made it from their heads to the airwaves.

“David Attenborough: A Life on Our Planet”

Broadcaster David Attenborough is 93 years old  and during his life he has visited every continent on the globe, exploring and documenting the wild places of the planet — but he has also seen firsthand the monumental impact humans have had on nature. In this documentary, Attenborough recounts his life — alongside the evolutionary history of life on earth — grieves the loss of the wild places around us and offers a vision for the future.

The slogan for Gallaudet University is simple: “There is no other place like this in the world!” And for many of the students who attend there, that statement feels accurate. The private college is the world’s only university in which all programs and services are specifically designed to accommodate deaf and hard of hearing students.

In this docuseries, a tight-knit group of Gallaudet students share their stories and explore the perks and pitfalls of campus life.

In the “The 40-Year-Old-Version” Radha Blank plays a fictionalized version of herself — a down-on-her-luck New York City playwright who reinvents herself as a rapper before her 40th birthday. Over the course of the film, Radha is pulled back and forth between the city’s theater and hip-hop scenes, two places where Black womens’ voices are still often underrepresented. “The 40-Year-Old-Version” is directed by Lena Waithe.

“The Cabin with Bert Kreischer”

Envision a Venn diagram where the phrases “comedy special,” “docuseries” and “Goop Lab” all overlap and “The Cabin with Bert Kreischer” will be there on the center loop. After years of grinding, the comedian set out on a “purifying retreat” to a remote cabin to “cleanse his mind, body and soul.”

Over the course of five episodes, viewers will watch as Kreischer is joined by fellow comedians and special guests — like Fortune Feimster, Gabriel Iglesias, Nikki Glaser, and Tom Segura — as he attempts bizarre therapy techniques, intense physical challenges and, per Netflix, “ridiculously improvised encounters with nature.”

Starring Danielle Brooks, Oscar Nuñez and Mike Colter, this anthology series — which straddles the line between tragedy and comedy — was shot totally in isolation and presents takes on how people strive to stay connected while staying apart.

“The Trial of the Chicago 7”

Aaron Sorkin’s highly anticipated piece of Oscar bait is based on the infamous 1969 trial of seven defendants charged by the federal government with conspiracy and more, arising from the countercultural protests in Chicago at the 1968 Democratic National Convention. The trial transfixed the nation and sparked a conversation about mayhem intended to undermine the U.S. government.

Based on Daphne du Maurier’s 1938 gothic novel, “Rebecca” centers on Lily James as a newlywed who has married a handsome widower (Armie Hammer) after a whirlwind romance in Monte Carlo. When they arrive at Manderly, her husband’s estate on the English coast, she finds that the home is haunted by the memory of Maxim’s first wife, Rebecca.

The psychological thriller is directed by English filmmaker and screenwriter Ben Wheatley, who is known for his work on the Tom Hiddleston thriller “High-Rise” and the action comedy “Free Fire.”

This limited series is based on the novel of the same name by Walter Tevis. Set in Kentucky in the 1950s, the show centers on Beth Harmon (Anya Taylor-Joy), a young orphan who discovers an astonishing talent for chess while also quickly developing an addiction to the tranquilizers provided by the state as a sedative for the home’s children. Her obsession for the game propels her into the male-dominated world of competitive chess, but will her personal demon render her an outcast for the rest of her life?

Here’s the full list of what’s coming to Netflix in October.

Oct. 4
“Colombiana”
“David Attenborough: A Life on Our Plane”

Oct. 15
“A Babysitter’s Guide to Monster Hunting”
“Batman: The Killing Joke”
“Half & Half: Seasons 1-4”
“Love Like the Falling Rain”
“One On One: Seasons 1-5”
“Power Rangers Beast Morphers: Season 2, Part 1”
“Rooting for Roona”
“Social Distance”

Oct. 21
“My Next Guest Needs No Introduction with David Letterman: Season 3”
“Rebecca”

Oct. 28
“Holidate”
“Metallica Through The Never”
“Nobody Sleeps in the Woods Tonight”
“Secrets of the Saqqara Tomb”

Oyornuwana means not in this house!

Sure, Mini Fridges for Beauty Products Are Cute—But Do They Work?