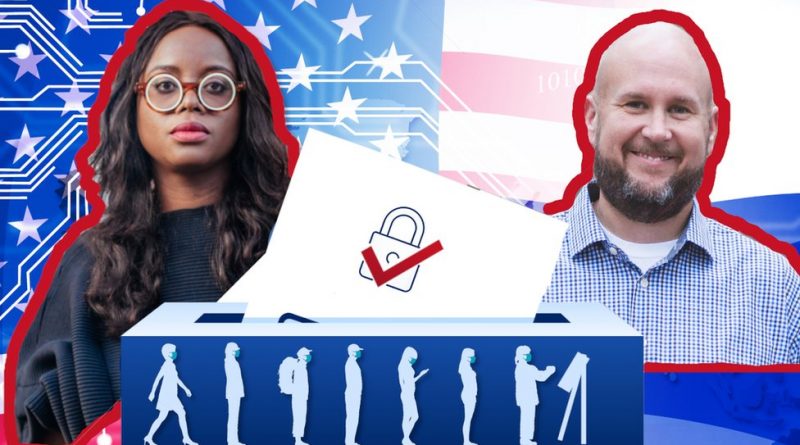 .css-14iz86j-BoldText{font-weight:bold;}“Earlier this year, I attended a conference and was shocked to find that you could actually buy voting machines on eBay. So I bought one, two months ago, and have been able to open it up and look at the chips.”

Beatrice Atobatele is trying to hack one of the most commonly used voting machines in the US, to look for security vulnerabilities, but not with any criminal intentions.

Beatrice is actually one of more than 200 people who have signed up to a volunteer group of security experts and hackers called the Election Cyber Surge.

And by understanding how this machine works, she hopes she can ensure any vulnerabilities are fixed.

“I’ve bypassed the authentication itself,” she says.

“I’m still learning and trying to find any new vulnerabilities that might not be known about yet.”

The problem with US elections, Beatrice and others say, is how disjointed they are.

Most estimates suggest there are about 8,000 separate election jurisdictions.

And every step of the process is vulnerable to hackers and human error.

In the polling booth, there are many different systems, from direct-recording electronic voting machines to ballot-marking devices and paper-based systems.

And the more digitised and connected a system is, the higher the risk of some sort of cyber-interference.

Like all the volunteers, Beatrice’s research is conducted outside of her day job.

And as a keen footballer, and mother to two soccer-obsessed daughters in New York City, she has to fit the volunteering around a busy schedule.

She didn’t plan to get into cyber-security at all.

It spurred her on to a new career path.

And she is now a security specialist for state and local government.

Despite the pressure she’s under, Beatrice is desperate to help the election run smoothly.

“Every vote cast should count,” she says.

“The thing that I’m worried about is some sort of ransomware attack on these machines on the day, which would stop people from voting.

A ransomware attack is when hackers take over a computer system or encrypt data until the victims have paid a ransom.

Beatrice and the rest of the Election Cyber Surge group are aware time is running out.

By now, it’s too late to update physical voting equipment.

But she is still searching for critical software flaws and offering to help election officials better understand their machines and any potential problems.

The group is being led by the University of Chicago’s Cyber Policy Institute, trying to “open up a line of communication between election officials and a network of volunteers for direct communication about cyber-security matters” leading up to the 3 November vote.

Hackers from all over the US have signed up to help secure the election or deal with any attacks that could derail an already fraught process.

“It’s not just voting machines on polling day that could be vulnerable to cyber-attack,” Christopher Budd, another volunteer from Washington state, says.

“With my hacker hat on, going after the registration lists being compiled right now across the US would be a great way to disrupt an election.

“If I’m not registered or if my registration record is altered in some way, even if the voting system is completely secure, my vote might not count.”

And again, the disjointed nature of the electoral system adds risk.

The security and even the actual structure of voter-registration databases vary.

And an FBI alert in the lead-up to the 2016 election warned foreign actors had gained access to some of these databases.

With the added complication this time of election officials remote working, and trying to plan around Covid-19 restrictions, Christopher is worried:

“I always try to de-escalate things in my job

“But there’s no doubt that there are heightened threats in this election.

“Everyone is focused on the vulnerability of this election.

“I’m willing to give whatever time is necessary to help out.”

Christopher’s expertise is in crisis communication and management.

As a consultant, he deals with cyber-attacks that bring large corporations to their knees.

He handles everything from panicking chief executives to angry IT managers, from his rural home office overlooking the woods.

And when he has to pull all-nighters, the only company he has are the local deer peering into his window, wondering what the fuss is about.

Over his 20 years of experience, Christopher has developed a secret weapon for when things truly hit the fan.

“When I really need to focus and work fast, there’s only one place I turn to – Symphony No 3 by Camille Saint-Saëns.”

Christopher hopes he won’t have to “crank out the Camille” in the next month – but he’s ready.

The group is also putting a huge amount of effort into data protection.

The last US and UK elections were hit by high-profile “hack and leak” operations.

In 2016, email accounts of the Democratic National Committee and some top Democrats were hacked and then leaked.

And in the 2019 UK general election, documents on UK-US trade talks were stolen from an MP’s email account and leaked online.

But he is less concerned about highly sophisticated zero-day attacks than more basic techniques.

“I don’t think we’re going to see attackers burn through precious zero days when they can get into important networks with far easier methods,” he says.

“I want to help people get the basics right.

US and UK security services publicly blamed Russian hackers for the “hack and leak” operations and numerous other disinformation campaigns to sway voters and sow discord on social media.

And other countries are also being blamed for cyber-activities that harm democracy.

Earlier this week, Twitter removed about 130 accounts linked to Iran it said had been trying to disrupt the public conversation during the first presidential debate.

Disinformation campaigns are a major concern the volunteer hackers say they won’t have time or capacity to deal with.

But Jason is committed to helping keep the bad guys out as best he can.

Before he got into hacking and cyber-security, he was a dispatcher for local state troopers.

And his time in law enforcement is what compelled him to become involved.

“I’m definitely a rule-follower,” he says.

“And my wife teases me about it all the time.

“But rules and laws are very important.

“And we need to uphold those things.

“I feel an uneasiness right now.

“Election officials have so much coming at them.

“So I’m really hoping I can help.” 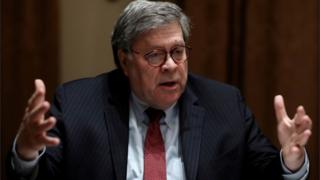 US tech and film ‘collaborating’ with China – Barr 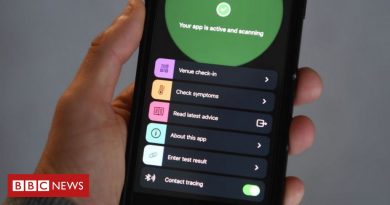