Abuja and Asaba — President Muhammadu Buhari yesterday virtually inaugurated the 326 kilometre-Itakpe-Ajaokuta-Warri rail line for commercial operations 30 years after the project was conceived, and directed the Ministry of Transportation to ensure that all the nation’s ports are linked to the rail line.

Buhari, who declared the rail line open for operations at a virtual meeting in the State House, instructed the Federal Ministry of Transportation to link all the nation’s ports of origin and destination, including Apapa, Tin Can, Warri, Onne, and Calabar Ports to the rail network to enhance overall transportation and economic capacities.

Special Adviser to the President on Media and Publicity, Mr. Femi Adesina, in a statement issued yesterday, said the president recognised the importance of railway mode of transportation as a strong support for industrialisation and economic development.

He also said the president disclosed that he had instructed relevant authorities to ensure the prioritisation of viable rail lines in the country and kick-off the reconstruction and rehabilitation of others.

He quoted the president: “Accordingly, I have approved the prioritiation of viable railway routes for either new rail lines or the reconstruction and rehabilitation of some, to achieve effective and efficient train services supporting the country’s trade and commerce.

“The railway infrastructure that I have the honour to commission today is the rail line from Itakpe via the steel town complex of Ajaokuta to Warri, and is an important link for the country’s economy as the central rail line.

“This government has also approved to link this line further from Itakpe to Abuja, thereby, connecting the Northern Zone of the country and also extending southwards to link the Warri Ports.”

Buhari said he was confident that the project would link the South-south to the North, before the end of his administration, adding that it will widen the scope of commerce in the country.

Buhari explained that 11 railway stations and railway villages had been named after some notable Nigerians who have distinguished themselves in the task of nation building and development.

He enjoined all Nigerians in the transportation industry, especially the railway sub-sector, to continue to support the government in its bid to construct other railway infrastructure projects.

The president called for the support of all Nigerians in the effort to entrench a functional and full-fledged central railway, after over three decades of conception, noting that the Itakpe-Ajaokuta project had suffered several setbacks since it was launched.

He urged stakeholders in the project to exhibit maintenance culture and to protect the infrastructure so that it can yield maximum benefits.

Buhari said projections had shown that the commencement of operations of the Itakpe-Ajaokuta-Warri rail line would serve almost a million passengers annually and also record approximately 3.5 million tonnes capacity of freight annually that will service all off-takers on the corridor and beyond.

He congratulated the Minister of Transportation, Mr. Rotimi Amaechi, and his team for the successful completion of the project.

He also praised the host communities on the corridor for being patient for over 30 years until the project came to fruition.

He also commended them for their cooperation during the completion works by the federal government.

The statement added that Delta State Governor, Senator Ifeanyi Okowa, in his remarks, commended what he described as Buhari’s bi-partisan approach to governance, saying “it is a thing of pride and joy that this rail line was completed under your watch.”

It further quoted him as saying: “Deltans are excited that this day has come,” adding that the Ika nation is glad of the recognition accorded Jonathan, in naming the railway complex in Agbor after him.

“It is imperative that the federal government in collaboration with the states provide adequate security cover for this rail line corridor,” he was further quoted as saying.

The statement also said Edo State Governor, Mr. Godwin Obaseki, congratulated Buhari on the completion of the project, quoting him as saying: “For us in Edo State we are excited that we have a few stops that have been completed and we are going to be working with you to utilise this infrastructure.”

It added that the governor appealed to the minister of transportation to extend the rail line to the industrial park in Benin City to facilitate the movement of goods to the northern part of the country.

It added that, in his remarks, Amaechi said the project was fully funded by the federal government, noting that eight of the 10 stations are located in the Niger-Delta.

He was quoted as saying: “There is no loan on this project, it was funded from the budget and I had the directive of the president to go and revive it and complete it as soon as possible.”

The statement added that Amaechi recalled that the project started during the military era in 1987 but “underwent protracted hiccups, prolonged abandonment and massive vandalisation,” before it was resuscitated by the Buhari administration. 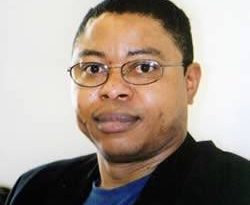 Rejoining With Buhari And Co. On Abba Kyari’s Record By G. Ugo Nwokeji