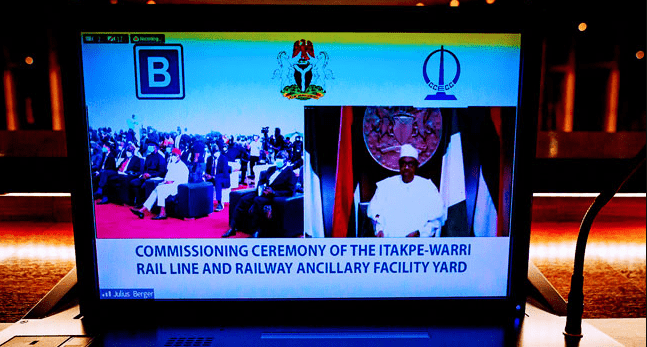 President Muhammadu Buhari on Tuesday directed the Federal Ministry of Transportation to link all the nation’s seaports at Apapa, Tin Can, Warri, Rivers, Onne and Calabar to the rail network in order to significantly improve overall transportation and economic capacities.

The President gave the directive during the virtual inauguration of the 326km Itakpe-Ajaokuta-Warri rail line for commercial operation as well as the ancillary facilities yard at the recently named Goodluck Jonathan Railway Complex in Agbor (Owa-Oyibu), Delta State.

He said his administration recognised the importance of the railway mode of transportation as a vital backbone to support industrialisation and economic development.

“Accordingly, I have approved the prioritisation of viable railway routes for either new rail lines or the reconstruction and rehabilitation of some, to achieve effective and efficient train services supporting the country’s trade and commerce.

“The Railway Infrastructure that I have the honour to commission today is the rail line from Itakpe via the steel town complex of Ajaokuta to Warri, and is an important link for the country’s economy as the central rail line.

“This government has also approved to link this line further from Itakpe to Abuja, thereby, connecting the Northern Zone of the country and also extending southwards to link the Warri Ports,” he said.

The President expressed confidence that the project, which serves as a vital link of South-South geopolitical zones of the country to the Northern zones, would be completed during the tenure of this administration.

President Buhari recalled that to further give recognition to Nigerian sons and daughters who have distinguished themselves at nation building and development, 11 railway stations and railway village were named after some deserving citizens.

The President enjoined Nigerians in the transportation industry, especially the railway sub-sector, to continue to support the government in its stride to achieve other railway infrastructure projects.

The Environmental Justice Foundation is demanding stronger sanctions for trawlers caught flouting the fishing laws of Ghana. EJF said the