The Upper West Regional Chairman of the NPP, Dr. S.B.Kangberee together with some regional executives of the party met the family of the late Wa Imam, Dr. Suleman M.H.Bakuri on behalf of his Excellency, the vice president of the Republic of Ghana in an effort to peacefully resolve their impasse.

The Regional chairman expressed regret about the mishap and assured the family that it was never the intention of the vice president to disrespect the family. The vice President has always enjoyed an enviable relationship with the late Imam and the family and would wish that this cordial relationship continues even after the demise of the Imam. He would therefore not intentionally do anything that would mare the beauty of that relationship. He further assured the family of the Government’s preparedness to do all it can on her part to give a befitting farewell to the late Imam.

The family on its part welcomed this intervention by the regional chairman on behalf of the Vice President, and stated that it was never the intention of the family either to put the presidency in bad light or engaged in such public exchanges with the presidency but for the conduct of the Regional Minister, Hon. Hafiz Bin Salih abusing his office by preventing the late Imam and his followers from carrying out their religious obligations through REGSEC, sending armed military and police men to disrupt our eid prayers, inciting other traditional authorities and supporting them against the Limanyiri family, preventing the president, vice president and others from calling on the family whenever they visit the region etc. The family has always enjoyed the courtesies and respect of the Vice President and the family is also well aware of the humility and respect that he pays to the elderly especially traditional and religious authorities in the country. It is the observation of the family that it has never been part of His Excellency, the Vice President of the Republic of Ghana, Dr. Mahamudu Bawumia to carry himself in a Manner as would bring his name into disrepute.

To the Regional chairman, S.B.Kangberee, the family was grateful to him and his executives for the mature leadership and the able manner in which he handled this matter. The family assured him of their support and prayers any time he calls on them.

To further cement this relationship, the regional chairman thanked the family for the good heart the family has shown and made a personal donation of GHC 20,000.00 on behalf of the vice President of the republic of Ghana. His donation was accepted by the family and the family expressed its sincere gratitude to the vice President and the Chairman Dr. S.B. Kangberee for the kind gesture and followed it up with prayers for the President, his vice, the government and the nation at large.

The family further took the opportunity to offer prayers for a peaceful election before, during and after the upcoming December 7 presidential and parliamentary elections. 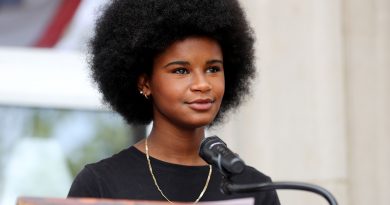 ‘Let Us Help You Lead’: Marley Dias on Why Young People Must Be Included in the Fight for Racial Justice