Agboola Ajayi, deputy governor of Ondo State and candidate of the Zenith Labour Party in the October 10 governorship election, has raised the alarm over the continued destruction of his campaign billboards and attacks on his supporters by suspected political thugs.

He spoke after his campaign office was attacked by armed thugs in Idanre Local Government Area of the state.

It was gathered that the thugs numbering over five stormed the office on Tuesday night to unleash mayhem.

Gbenga Olayoriju, a security man stationed in the office, was allegedly threatened with death by the armed thugs without any challenge while the attack lasted.

Ajayi’s complaint was contained in a statement by the Director-General of his Campaign Organisation, Kola Ademujimi, on Wednesday in Akure.

He stated that posters, chairs, tables, billboards among other properties were damaged by the thugs during the attack on his office.

The deputy governor, who alleged that the thugs were working for the All Progressives Congress and Governor Rotimi Akeredolu, also attacked some of his supporters.

He said, “Akeredolu’s thugs are threatening the lives and properties of members of ZLP and those of other parties in various parts of the state.

“They destroyed chairs, tables, and inflicted injuries on our supporters at their ward meeting in Ile-Oluji.

“They also destroyed Agboola Ajayi’s billboards at our campaign office in Akure.

“They destroyed our flags and posters in Idanre during Aketi/APC’s campaign tour of Idanre yesterday (Tuesday).

“I think they are out to cause mayhem even before the October governorship election in Ondo State.

“We are calling on security agencies to live up to their expectations before the opposition parties are forced to act in self-defence.”

Prepare For Four More Years Of Activism, Adeyanju Tells Buhari As He Returns From 78 Days In Prison 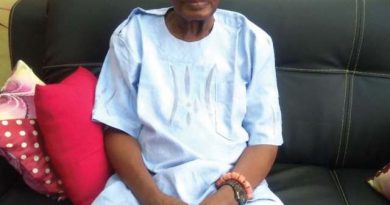 Vice President of the Republic, H.E Dr Bawumia has yesterday, July 30 donated a fat male cow to the Council