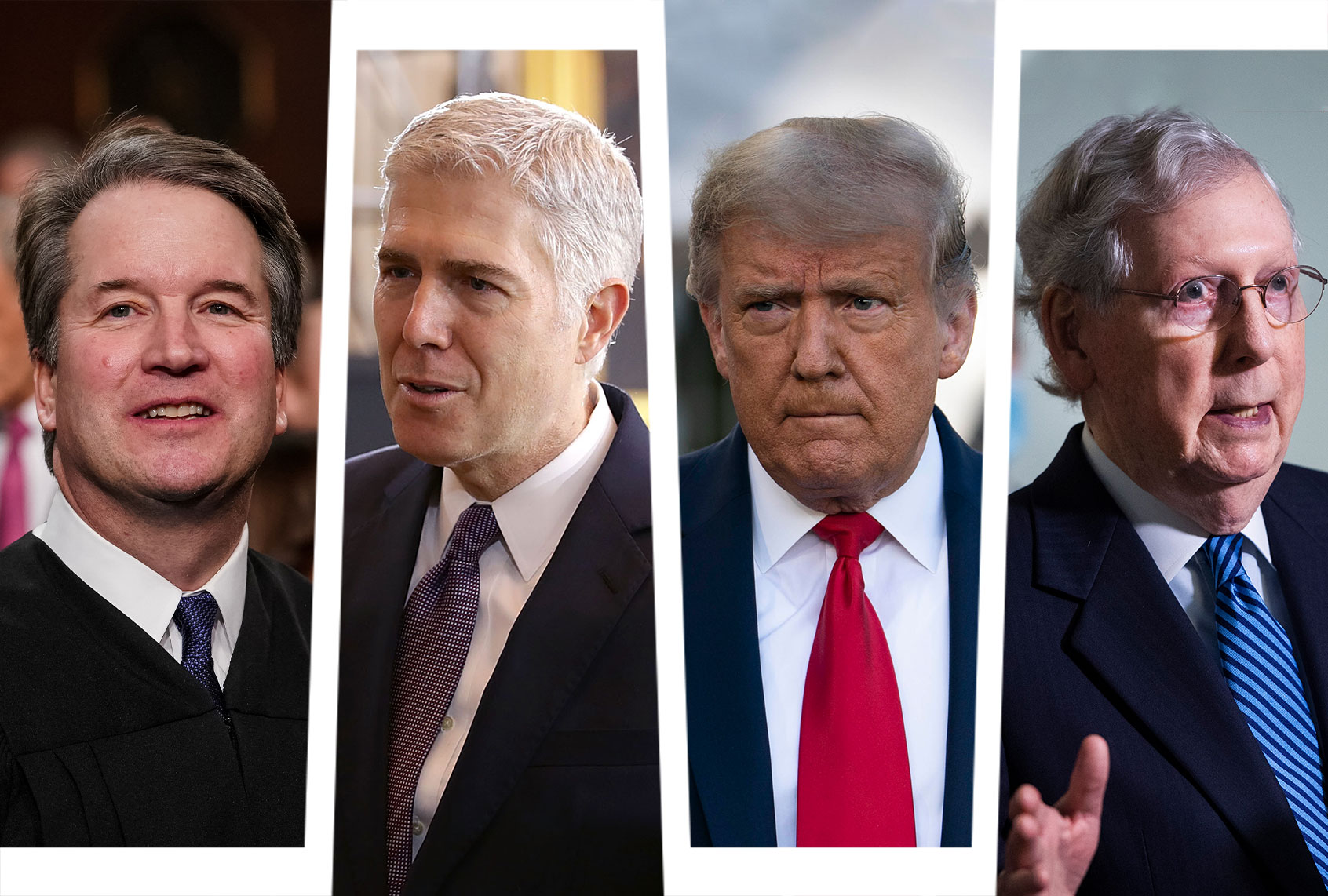 Ever since Donald Trump’s oversized suit-clad carcass first befouled the Oval Office, there’s been talk in the media about if and when he would cause a constitutional crisis. The assumption underlying this discourse is that a constitutional crisis would hit us like a thunderbolt and we would collectively realize, all at once, that the very fate of our democracy was on the line. Instead, there’s been a series of mini-constitutional crises, from Trump stomping all over our laws against foreign emoluments (an old-timey phrase for being bribed by foreign leaders), obstructing justice during Robert Mueller’s investigation into Trump’s role in Russian election interference, blackmailing the Ukrainian president to extract dishonest election assistance and about a dozen other instances it would be tedious to list.

The result has been a steady erosion of the political norms and laws that protect our democracy, culminating in Trump’s last big push to steal or corrupt the 2020 presidential election.

If Trump successfully does that, it could well be the killing blow for our tattered democracy. But it’s important to understand that the credit for orchestrating the demise of our once-great nation should largely go to Senate Majority Leader Mitch McConnell, a man possessed by the same lust for power and moral turpitude as Trump, but not hobbled by Trump’s stupidity or short-sightedness.

It was McConnell who recognized long ago that he could leverage the undemocratic power of the Senate as a weapon to invade and conquer the federal courts, and then use the latter to vacate any effort by the voters to exert real influence on how this country is governed. During Barack Obama’s presidency, McConnell deliberately slow-walked the confirmations of Obama’s nominations to the federal bench, leaving dozens of seats empty. When Trump was elected, McConnell hit the gas, packing the courts at record speed with an assembly line of nearly identical conserva-bots whose main attributes were youth and a willingness to forgo any intellectual rigor to rubber-stamp the right-wing agenda.

With the death of the Supreme Court’s liberal lion, Justice Ruth Bader Ginsburg, McConnell has a real opportunity to complete his mission of crushing democracy completely. Sure, there will still be elections and Democrats may win lots of them, especially this year with so many liberals fired up to throw Trump out of office. But with a possible 6-3 conservative majority on the court, McConnell knows that conservatives can nullify most efforts by those elected officials to pass progressive legislation. McConnell can even stop worrying about Chief Justice John Roberts, who occasionally has a bout of conscience and votes with the liberals to uphold precedent or follow constitutional law.

That commanding court majority won’t just serve as a firewall against new laws passed by a Democratic House and Senate. It will also give Republicans an opportunity to undo decades of progress in human rights. McConnell stole dozens of federal court appointments that legally belonged to Obama, but his crowning jewel, of course, was the theft of the seat left open when Justice Antonin Scalia died in early 2016. Using the laughably thin pretext that you shouldn’t seat a Supreme Court justice during an election year, McConnell refused even to hold  hearings for Obama’s nominee, Merrick Garland.

“The American people should have a voice in the selection of their next Supreme Court Justice,” were McConnell’s exact words. “Therefore, this vacancy should not be filled until we have a new president.”

Right now, Democrats are understandably up in arms about McConnell inventing this “not during an election year” rule and then dropping it the second he had a chance to seat a judge during not just an election year, but right in the thick of a presidential campaign.

Consider also that the American people picked Al Gore over George W. Bush in the 2000 election — by about 500,000 votes. If it were up to the American people, it’s arguable that seven of the nine current Supreme Court would be Democratic appointees.

Trump is a notorious, pathological liar, but we can’t let that get in the way of seeing that McConnell is just as rotten, and much craftier about being evil, to boot. McConnell loves to resort to high-minded rhetoric about democracy, but he’s clearly laughing up his sleeve the entire time. If Americans had a real democracy, McConnell wouldn’t even hold his leadership position: A majority of Americans have been voting for Democrats in Senate races for years, but Republicans control the upper chamber of Congress because the Constitution gives disproportionate power to rural states with small but overwhelmingly conservative populations.

Even this unfair stranglehold on power isn’t enough for McConnell, however, which is why he has lied, cheated and stolen his way to control the federal judiciary. He intends to use that same judiciary to steal even more power for Republicans at the ballot box, because conservative judges are only too happy to hand down rulings on voting rights and gerrymandering that allow Republicans to further eviscerate Americans’ ability to choose their own leaders.

The ugly, hard truth is that the constitutional crisis has been going on for years, and the architect of our demise isn’t Donald Trump. He’s just a loudmouth bully Republicans can hide behind to get what they’ve always wanted — to hold onto power without being accountable to the voters.

Sure, this presidential election is important, but getting rid of Trump isn’t enough to save us. If Democrats can pull off this election, we will need drastic reform — starting with packing the courts and major voting-rights legislation — simply to begin to undo all the damage done by McConnell and his crew. Not because that’s good for the Democrats, although that would be a likely side effect. But because our democracy is taking its last breaths, and without major intervention it will be lost to us for good.

Climate strikers blast EPA suspension of pollution laws: “How are we supposed to protect our lungs?”