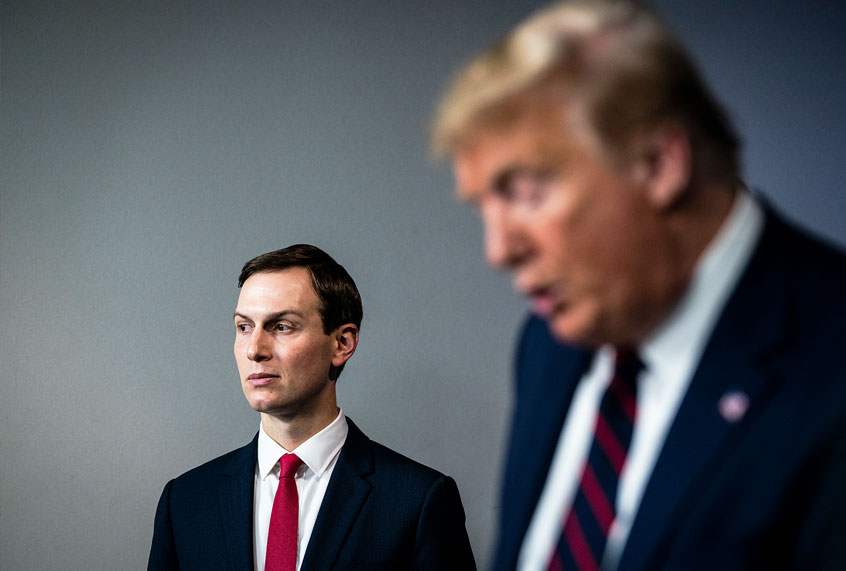 A new exposé suggests that Jared Kushner, the senior White House adviser and son-in-law of President Donald Trump, pushed back against taking federal action to address medical supply shortages and help the Democratic-led state of New York as the coronavirus pandemic accelerated over a belief that free markets should “solve” the problem.

Kushner enlisted a former roommate to lead what Vanity Fair described as a “Consultant State” — a countervailing force to the fugazi “Deep State” — while simultaneously dismissing proposals from corporate and industrial leaders in the early days of the pandemic response.

A bipartisan group of government and private sector officials came together at the White House on March 20, according to the report. Nearly 20,000 Americans had been diagnosed with COVID-19 at the time, and at least 260 had died.

Dozens of major companies, including General Motors, committed to manufacturing ventilators, distributing supplies, creating a contact tracing system and more. They only needed the administration to invoke the Defense Production Act (DPA).

Kushner, who had taken the reigns of a shadow coronavirus task force, was not present. Senior administration officials “implored” the group to consult him. An observant Jew, Kushner normally does not work during Shabbat, which is when this meeting occurred. (He reportedly gets a “rabbinic dispensation” to exempt him from key public work.)

The next day, Kushner joined. He “stunned” many attendees, according to the report. Here is how they described the meeting to Vanity Fair:

Kushner, seated at the head of the conference table, in a chair taller than all the others, was quick to strike a confrontational tone. “The federal government is not going to lead this response,” he announced. “It’s up to the states to figure out what they want to do.”

One attendee explained to Kushner that due to the finite supply of PPE, Americans were bidding against each other and driving prices up. To solve that, businesses eager to help were looking to the federal government for leadership and direction.

“Free markets will solve this,” Kushner said dismissively. “That is not the role of government.”

The same attendee explained that although he believed in open markets, he feared that the system was breaking. As evidence, he pointed to a CNN report about New York Gov. Andrew Cuomo and his desperate call for supplies.

According to another attendee, Kushner then began to rail against the governor: “Cuomo didn’t pound the phones hard enough to get PPE for his state . . . His people are going to suffer and that’s their problem.”

“That’s when I was like, ‘We’re screwed,'” the shocked attendee told Vanity Fair.

The group pressed Kushner to invoke the DPA. “We were all saying, ‘Mr. Kushner, if you want to fix this problem for PPE and ventilators, there’s a path to do it,'” one attendee told Vanity Fair. “But you have to make a policy change.”

Kushner, who allegedly grew “very aggressive,” told the group that it “only understood how entrepreneurship works, but didn’t understand how government worked.” An attendee told Vanity Fair that the arguments “made no sense.”

“It felt like Kushner was the president,” the attendee told the outlet. “He sat in the chair, and he was clearly making the decisions.”

Though Trump nominally invoked the DPA the following week, he did not apply the act to any supplies. He attacked GM’s CEO in a tweet saying, “Always a mess with Mary B.” The government announced its first order of GM ventilators on April 8.

“President Trump has consistently put the health of all Americans first,” she said.

However, audio tapes surfaced last week of Trump’s on-the-record conversations with veteran investigative journalist Bob Woodward. The president acknowledged on tape Feb. 7 that the coronavirus was “more deadly” than “even your strenuous flus.”

Trump later admitted to downplaying the threat to the American public in order to prevent “panic.” That admission came March 19 — two days before Kushner met with the private sector coalition.

The same Vanity Fair reporter revealed in July that Kushner had commissioned a federal testing plan, which was soon aborted. A public health expert close to the White House coronavirus task force told the outlet that the reason for dropping the plan was “the political folks believed that because [the virus] was going to be relegated to Democratic states, that they could blame those governors and that would be an effective political strategy.”

The U.S. appears poised to easily pass 200,000 official COVID-19 deaths by the end of the month. The country comprises 4% of the world’s population but 20% of global coronavirus deaths.

In August, with COVID-19 deaths topping 170,000, Kushner described the government response as a “success story,” a phrase which he had also deployed to describe his performance in an interview four months and 110,000 deaths earlier.

A person who attended the March 21 meeting told Vanity Fair that the group of private sector representatives had even built out a proposal for contact tracing.

“We had a real system for contact tracing, the world’s best mobile engineers on standby,” the person said. “There was a real opportunity to have a coordinated response.”

“We had so much potential to commandeer against this.”

NDLEA seized N60bn worth of narcotic drugs in 6 weeks — Marwa

“The poster child for climate change”: Study predicts polar bears will die off within 80 years