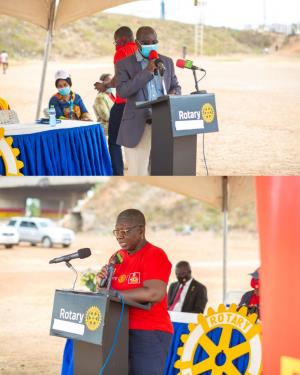 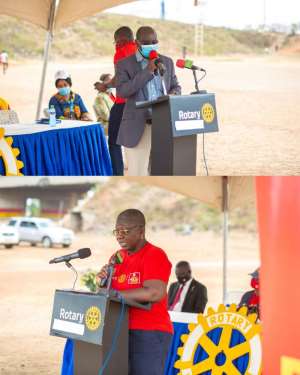 In a bid to eradicate Polio, a vaccine-preventable disease which threatens children worldwide, Rotary and its partners across the world have reaffirmed their commitment to the global efforts in achieving this objective.

At an event in Ashaiman to outdoor a billboard to mark the achievement chalked by the 54 Africa countries in eradicating the wild polio virus over the last three years, the partners, including CEF, CDC, Bill and Melinda Gates Foundation, Ministry of Health and Ghana Health Service, were unanimous that mass immunization efforts must be sustained to totally win the fight.

The day’s activity on the theme ‘End Polio Now’ was to enforce Rotary International and the Rotary Foundation’s zeal to ensure that the world becomes Polio Free forever. 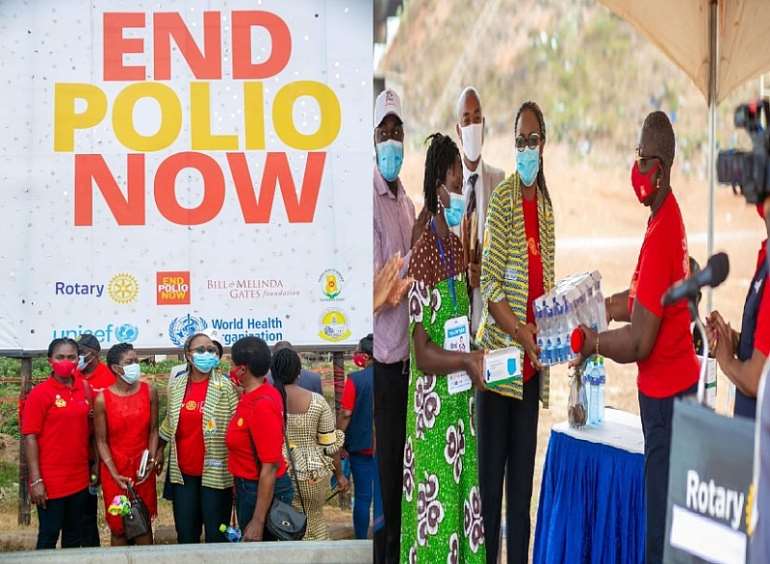 The Chairperson of the Ghana National Polio Plus Committee, Past Assistant Governor Nana Yaa Siriboe, said the Global Polio Eradication Initiative (GPEI) partners and the African Region were happy that major gains had been made in the fight against polio.

In August 2019, Nigeria, the last wild polio-endemic country in Africa passed three consecutive years without a trace of wild poliovirus.

“This is to say that no case of wild polio virus has been reported in WHO African Region for over three consecutive years. This is a feat worth celebrating,” Madam Sereboe said.

In 1996, Rotary and its partners joined with the late Nelson Mandela to jump-start Africa’s commitment to polio eradication with the launch of kick polio out campaign.

Since then nine billion doses of oral polio vaccine have been provided averting an estimated 1.8 million cases of wild polio virus on the continent.

Madam Sereboe said the success of end polio now campaign had proved that with strong commitment, coordination and perseverance polio eradication was possible.

“With our partners we have found innovative ways to vaccinate children and how to reach conflict-affected areas but conducting flexible and rapid vaccination campaigns,” she said.

Rotarians have contributed nearly a billion US Dollars towards polio eradication efforts in the African region alone and $1.8billion globally.

Past Assistant Governor Nana Yaa said the outdooring of the billboard in the community was to encourage every parent to have their children vaccinated against poliomyelitis.

“We do hope that the immunization exercise which will be conducted from 10-13 September 2020 will receive full support from everyone,” she reiterated.

District Governor for District 9102 Yvonne Kumoji-Darko said more than 9 billion doses of oral polio vaccine have been provided throughout the region, preventing an estimated 1.8 million cases of paralysis.

Each year, about 2 million volunteers help vaccinate 220 million children against polio multiple times in the African Region alone, and 2.5 billion children in 122 countries.

In Ghana, 52 Rotary Clubs and approximately 1500 Rotarians join hands with the Ministry of Health, staff and nurses and partners to participate in our National Immunization Days. She reiterated her appreciation to the Government of Ghana for her continued support of this initiative to eradicate polio.

“Today, Polio remains endemic only in Afghanistan and Pakistan. But it is crucial to continue working to keep other countries polio – free. If all eradication efforts stopped today, within 10 years, polio could paralyze as many as 200,000 children each year. As Rotarians, we are determined to fulfil the promise we made to the children of the world, since our first project to vaccinate children in the Philippines in 1979” the District Governor stated.

Dr Fadinding Manneh, the Global Polio Eradication Initiative Coordinator in Ghana commended the partners for their leadership and commitment.

“We have all shown tremendous leadership and personal commitment in this cause of eradicating polio. The global polio eradication initiative has a strong history of working together on many important challenges facing polio eradication,” he said.

He said since the initiative was launched in 1988, over 99 per cent of polio cases were eradicated worldwide.

“So that is a great progress but while polio remains anywhere in the world it is still a threat to everyone,” he said.

We need to keep this action going. The continued commitment and strengthening immunization is essential to protect the progress that has been achieved so far.

Also present at the event were representatives from WHO, UNICEF, and Ghana Health Service who have all contributed immensely over the years in partnering Rotary on this journey.

Another activity embarked on by the Rotarians was the distribution of face masks with End Polio Now inscribed on them to the people of Ashaiman.

This is aimed to help curb the spread of the Coronavirus and to remind everyone that our work is not completely done as we all need to fight Polio from the surface of the earth.

Rotary is a global network of 1.2 million neighbors, friends, leaders, and problem-solvers who unite and take action to create lasting change in communities around the globe.

Director of Health Promotion at the Ghana Health Service, Dr Da Costa Aboagye has cautioned against many Ghanaians who have