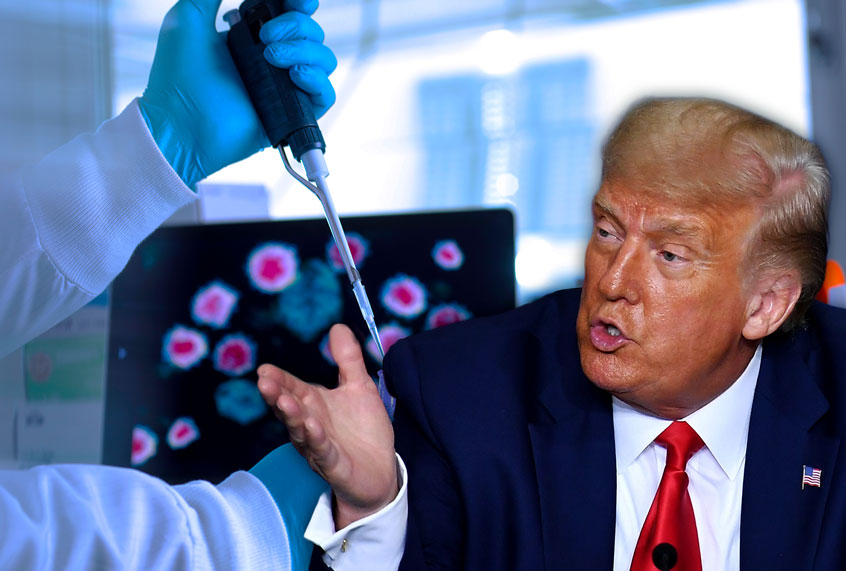 The Trump administration announced on Tuesday that it will not join a global effort to develop and equitably distribute a coronavirus vaccine, which could leave impoverished countries or even the United States without access to an effective vaccine.

More than 170 nations are in talks to join Covid-19 Vaccines Global Access (COVAX) Facility, an effort coordinated by Gavi, the Vaccine Alliance and the WHO to pool resources to “ensure COVID-19 vaccines are available worldwide to both higher-income and lower-income countries.”

But the White House said Tuesday that the United States will not participate, according to The Washington Post, because of the involvement of the WHO.

“The United States will continue to engage our international partners to ensure we defeat this virus, but we will not be constrained by multilateral organizations influenced by the corrupt World Health Organization and China,” White House spokesman Judd Deere told the outlet.

The Post reported that Health and Human Services Secretary Alex Azar and Deputy Secretary of State Stephen Biegun were “interested” in the initiative but were “ultimately overruled.” Other officials argued that there were enough vaccine candidates in the U.S. to “go it alone.”

Medical experts worry that the move will leave struggling countries without access if the U.S. develops a vaccine first and refuses to share it with other countries or, less likely, that the U.S. could be left without a viable vaccine if all of the clinical trials in the country ultimately fail. Even if the U.S. is able to develop and distribute a mostly-effective vaccine to its own residents, many Americans could still be left vulnerable to imported infections if other countries do not have access.

Democrats quickly criticized the administration for making a big bet with the lives of Americans and millions around the world.

“Joining COVAX is a simple measure to guarantee U.S. access to a vaccine — no matter who develops it first,” said Rep. Ami Bera, D-Calif., a medical doctor. “This go-it-alone approach leaves America at risk of not getting a vaccine. This decision also greatly risks slowing down our own economic recovery.”

“Trump’s ‘America First’ is really just ‘America Alone,'” added Rep. David Cicilline, D-R.I., who serves on the House Foreign Affairs Committee. “To not join the world in distributing a coronavirus vaccine is effectively flipping off the entire planet.”

Trump has long grumbled about the WHO, trying to cast it as a scapegoat amid his widely-criticized coronavirus response that resulted in the worst outbreak in the world. He announced the U.S. would cut off funding for the organization in May over claims that it made misleading claims about the pandemic under pressure from the Chinese government. The move was criticized by infectious disease experts like Dr. Anthony Fauci and international leaders, who defended the WHO as a key actor in the fight against the pandemic.

“Not only does this move put the lives of millions around the world at risk, it could completely isolate Americans from an effective vaccine against COVID-19,” Tom Hart, the North America director at the advocacy group The ONE Campaign, told the Associated Press.

The decision suggests that the administration is betting that the United States will be the first to develop an approved vaccine, which experts said was a risky gamble.

“America is taking a huge gamble by taking a go-it-alone strategy,” Lawrence Gostin, a professor of global health law at Georgetown University, told the Post.

Kendall Hoyt, an assistant professor at Dartmouth’s Geisel School of Medicine, added that the move was “akin to opting out of an insurance policy.”

“Just from a simple risk-management perspective, this [Covax decision] is shortsighted,” she said.

Experts noted that the Trump administration’s decision could have other repercussions. The goal of the COVAX initiative is to discourage hoarding of vaccines and target high-risk populations across the world first in order to improve health outcomes and lower the cost. That mission is more difficult without the United States’ involvement.

“When the U.S. says it is not going to participate in any sort of multilateral effort to secure vaccines, it’s a real blow,” Suerie Moon, the co-chair of the Forum on Global Governance for Health at the Harvard Global Health Institute, told the Post. “The behavior of countries when it comes to vaccines in this pandemic will have political repercussions beyond public health. It’s about: Are you a reliable partner, or, at the end of the day, are you going to keep all your toys for yourself?”

The administration’s decision could also have widespread economic consequences. If countries still have to keep their lockdowns even as the US distributes the vaccines and lifts restrcitions, the global economy and supply chain would prevent the US from fully bouncing back.

“We will continue to suffer the economic consequences — lost U.S. jobs — if the pandemic rages unabated in allies and trading partners,” Thomas Bollyky, who heads the Council on Foreign Relations’ global health program, told the Post.

J. Stephen Morrison, the director of the Global Health Policy Center at the Center for Strategic and International Studies, added that the administration could still change its mind or Congress could find a workaround by funding Gavi.

“This just shows how awkward, contradictory and self-defeating all of this is,” he said. “For the U.S. to terminate its relationship with the WHO in the middle of a pandemic is going to create an endless stream of self-defeating moments.”

Tech giant, Microsoft to close most of its stores worldwide

The opposition National Democratic Congress (NDC) Parliamentary Candidate has been declared winner of the disputed Sene West Parliamentary race. The