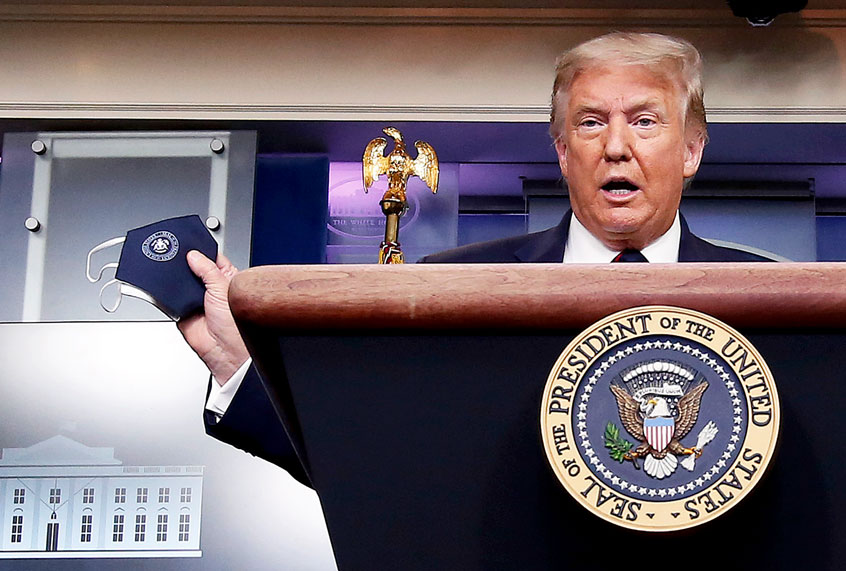 President Donald Trump has mulled skirting regulatory procedures in order to fast-track the authorization of a coronavirus vaccine before Election Day, according to The Financial Times.

The administration has considered speeding up the availability of an experimental coronavirus vaccine being developed in the U.K. by Oxford University and the pharmaceutical giant AstraZeneca via an “emergency use authorization” from the Food and Drug Administration, three people briefed on the plan told The Times.

The AstraZeneca vaccine is undergoing testing in a trial with 10,000 volunteers, though U.S. health agencies have said a vaccine must be studied on at least 30,000 people to meet authorization standards.

“Each vaccine needs to be tested on about 30,000 volunteers,” Dr. Francis Collins, the director of the National Institutes of Health, told CNN in June. “We don’t believe that we have enough power in the analysis to be able to document the vaccine works unless you get to roughly that number.”

White House chief of staff Mark Meadows and Treasury Secretary Steven Mnuchin told Speaker of the House Nancy Pelosi, D-Calif. and Senate Minority Leader Chuck Schumer, D-N.Y., on July 30 that an emergency use authorization for the vaccine might come as early as September, according to the report. The vaccine may also be authorized for emergency use prior to full approval.

A Treasury spokesperson denied that Mnuchin had made the remarks.

“Secretary Mnuchin did not make any comments regarding AstraZeneca, nor is he familiar with the specifics of the AstraZeneca vaccine candidate. He is also not aware of any plans the FDA may have regarding any emergency use authorization for any potential vaccine beyond what he has heard publicly stated,” the spokesperson told The Times. “The secretary believes, and has always believed, that any decision on vaccine candidates and any possible EUA is up to the FDA.”

Michael Caputo, a spokesperson for the Department of Health and Human Services, told the outlet that any claim that the FDA would issue an emergency use authorization before the election was “absolutely false,” and the administration hopes a vaccine will be developed by early 2021.

“We have always been working towards that goal. I’ve never been told at any point in time that that goal has changed,” he said. “Talk of an October surprise is a lurid resistance fantasy. Irresponsible talk of an unsafe or ineffective vaccine being approved for public use is designed to undermine the president’s coronavirus response.”

Robert Redfield, the director of the Centers for Disease Control and Prevention, added that “although we have talked about doing this at ‘warp speed’, it is not through any cuts in our efforts for vaccine safety or scientific integrity.”

A spokesperson for AstraZeneca told The Times that it had “not discussed emergency use authorization with the U.S. government,” and the company “would be premature to speculate on that possibility.”

The administration likewise denied that politics had anything to do with the FDA’s abrupt decision to issue an emergency use authorization for the use of convalescent plasma from recovered coronavirus patients to treat the newly infected. The move came after Trump publicly alleged that so-called “deep state” forces inside the FDA were slowing the development of vaccines and treatments “until after” the election.

“We’re years ahead of approvals than we would be if we went by the speed levels of past administrations. We would be two years, three years behind,” he said. “That includes vaccines that you’ll be hearing about very soon.”

The abrupt announcement came after Collins and Dr. Anthony Fauci, the director of the National Institute of Allergy and Infectious Diseases, warned that there was not enough data to support authorization of the plasma treatment. The World Health Organization, for its part, said the data backing the use of convalescent plasma was “very low-quality evidence.”

The FDA similarly issued an emergency use authorization for the use of hydroxycholoroquine under pressure from Trump earlier this year before revoking it soon after numerous studies showed the drug was not effective in treating the coronavirus and could be dangerous for some patients.

Pelosi criticized Trump for politicizing health regulations ahead of the election.

“The FDA has a responsibility to approve drugs judging on their safety and their efficacy — not by a declaration from the White House about speed and politicizing the FDA,” she said in a statement. “This was a very dangerous statement on the part of the president. Even for him, it went beyond the pale in terms of how he would jeopardize the health and wellbeing of the American people.”

Other countries, such as Russia and China, have bypassed large clinical trials in order to rush their own vaccines to the public, only to be met with skepticism and warnings from scientists.

Only 24% of Russian doctors said they would take the vaccine, according to one survey, and four of the country’s trade unions representing doctors and teachers have warned against taking it.

“It can be dangerous to start vaccinating millions — if not billions — of people too early, because it could pretty much kill the acceptance of vaccination if it goes wrong,” German Health Minister Jens Spahn told reporters earlier this month. “So I’m very skeptical about what’s going on in Russia.”

Any move to rush the vaccine to the public could trigger a series of resignations at the country’s top health agencies.

Peter Marks, the director of the FDA’s Center for Biologics Evaluation and Research, told Reuters and government officials that he would resign if the agency approved a vaccine before it was shown to be safe and effective.

“You have to decide where your red line is — and that’s my red line,” he told the outlet. “I would feel obligated (to resign), because in doing so, I would indicate to the American public that there’s something wrong.”

Naba Yelzoya Kosom Asaga II, the Paramount Chief of the Nangodi Traditional area in the Nabdam District of the Upper