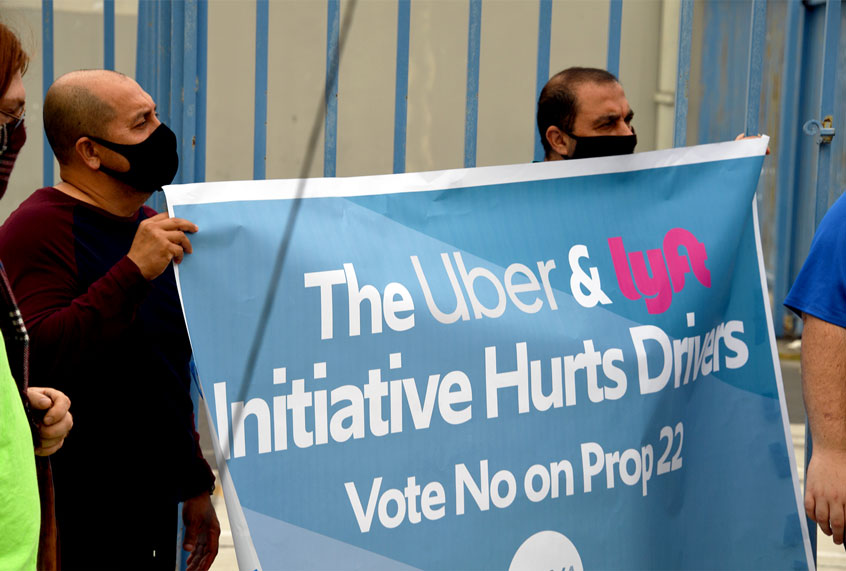 Hours after Lyft announced that the company would be suspending operations in the state of California at midnight tonight, a judge issued a stay granting them more time. This action has now temporarily stopped last week’s preliminary injunction that mandated Uber and Lyft must classify their drivers as employees rather than contractors within 10 days. In other words, both Uber and Lyft will continue to operate as usual in California after a week of threats to suspend operations — threats whose sole aim was to keep the companies from having to give their workers benefits, labor protections, or guaranteed hourly wages in the manner befitting employees.

While Uber never made an official announcement on Thursday that it would stop operating, the company was expected to make an announcement before midnight after Uber CEO Dara Khosrowshahi made numerous threats. Uber also sent out a notification on Wednesday evening that rideshare services were on the verge of ending in California temporarily. Both Uber and Lyft have confirmed to Salon in separate statements that the two companies will continue business as usual in California.

“We are glad that the Court of Appeals recognized the important questions raised in this case, and that access to these critical services won’t be cut off while we continue to advocate for drivers’ ability to work with the freedom they want,” Harry Hartfield, a press officer at Uber, confirmed to Salon.

As part of the stay, the judge gave Uber and Lyft’s chief executives until September 4, according to the case information, to submit a sworn statement including a plan to reclassify their drivers if their ballot measure, which proposes to exclude both companies from Assembly Bill 5, fails.

[Read more: UberEats workers believe the company is systematically underpaying them — and they have the receipts to prove it.]

While the stay is in Lyft and Uber’s favor, the battle — with the companies on one side, and city officials and labor leaders demanding that Uber and Lyft follow the law on the other — is far from over.

“While we won’t have to suspend operations tonight, we do need to continue fighting for independence plus benefits for drivers,” Julie Wood, a spokesperson for Lyft, told Salon in a statement. “That’s the solution on the ballot in November, and it’s the solution drivers want because it preserves their ability to earn and to use the platform as they do now — whenever they want — while also getting historic new benefits.”

Indeed, Uber and Lyft are fighting for a “third way” to provide drivers with more benefits without having to legally classify them as full-time drivers. Yet many of their drivers were disappointed in the two companies’ threats, as drivers have been organizing to be classified as full-time drivers for years — an effort that was realized in Assembly Bill 5 when it was approved by the California State Senate 29-11 on a party-line vote and which was supposed to have taken effect on January 1 of this year.

Edan Alva, who lives in Alameda County, started driving for Lyft in 2014. He started as a part-time driver, but tried to drive full-time for the app when he lost his primary job.

“I quickly discovered that it’s impossible — that when you need to actually exist on this income and pay things like health insurance for myself and my teenage son, and just put food on the table, and pay rent and all the other costs in the Bay Area, it’s impossible to exist on a Lyft income,” Alva told Salon.

When the pandemic hit, Alva, who is an organizer with Gig Workers Rising, tried to keep driving but decided there was “no point.” Like many drivers, he experienced a decline in ridership, and was spending a lot more time and money disinfecting his car in between rides. He then filed for unemployment and has been doing temporary jobs, including working as a surveyor for the 2020 census.

Since Uber and Lyft have never classified their drivers as full-time employees, the companies have never paid an unemployment insurance tax for each of their workers. This means that the state’s unemployment fund, that the companies have never contributed to, are paying for their own workers’ unemployment benefits. According to an analysis by the University of California–Berkeley Labor Center, Uber and Lyft collectively would have paid $413 million into the California Unemployment Insurance fund from 2014 to 2019 if their drivers were classified as employees.

When asked about his feelings on Uber and Lyft no longer suspending their operations in California, Alva said he was “glad” that drivers wouldn’t be out of work overnight. He added that he was frustrated because the mandate wasn’t news for Uber or Lyft; they had plenty of time to put a plan together to classify their drivers.

“I can’t ignore the fact that this is not the starting point; it’s not like Lyft and Uber were suddenly told you have to shift into employment employee mode,” Alva said. “They’ve been avoiding the law for years, long before AB5.”

Saori Okawa has been driving for Uber for one year, and has done 3,700 rides in San Francisco. Before Uber, she drove part-time for Lyft. Okawa likened Uber’s threats to suspend operations in California to “a big giant baby.”

“I used to nanny for this rich family with a spoiled baby who used to cry whenever he didn’t get the things he wanted, and I thought, ‘Uber is like that,'” Okawa said. “They were being so childish.”

Okawa added that the companies had an unfair response to the preliminary injunction.

“Employers should be protecting their workers and helping us, instead they’re going the other way” Okawa said. “I think it’s very dirty.”

Drivers will continue organizing and encouraging voters to vote “no” on Proposition 22 this fall. As Salon previously reported, Uber and Lyft funded the ballot measure Proposition 22, which will appear on the November ballot in California and will exempt the companies from Assembly Bill 5. The astroturf campaign has been said to cost the rideshare giants $110 million.

The fake Arizona “audit” is confusing, idiotic, and endless — which means it’s working as intended